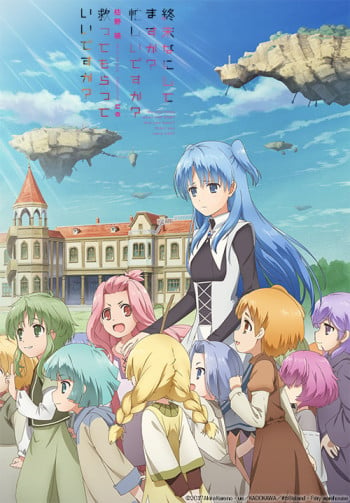 WorldEnd: What do you do at the end of the world? Are you busy? Will you save us? Episode 5 - from dawn till dusk

Phyr details her request to Limeskin, who refuses and asks Willem for a favor of his own.

from dawn till dusk

no news was good news

Anime-Planet users recommend these anime for fans of WorldEnd: What do you do at the end of the world? Are you busy? Will you save us?. All available to watch right here, right now!

These 2 anime have a very similar overall feel both in comedy and in the emotional trip. While I do feel that Re:Zero's story was good I feel more satisfied with Shuumatsu's story

These anime have many similarities and yet they are really different from one another. I would recommend both.

In the year 2021, mankind was defeated by Gastrea, a parasitical virus, and was forced to live within a wall made of Baranuim monoliths, a metal that is able to subdue Gastrea. Soon, the "Cursed Children" were discovered: children born infected with the Gastrea virus who possess superhuman abilities. Due to the Gastrea virus' intervention, the...

Same concept on little girls using weapons fighting agaisnt beasts and 1 male protagonist and maybe some sad scene where some of the girls die, this anime is a must watch if you like this type of anime, so yeah......watch it.

The nameless protagonist awakens to find himself standing in the middle of a vast, snowy plain he doesn't recognize. Suffering from amnesia, he remembers nothing about himself. Suddenly, he's attacked by an insect-like creature but is saved by a beautiful girl with animal ears and a tail named Kuon. She names him Haku.

Season two of Utawarerumono is closer than season one to Worldend.  Both stories take place after a devasted world pretty much ended humans except seemingly for one lone man left.  Beast like creatures dominate the new world.  Over 500 years passed for the main character from his original timeline to the current one in the story.  The lead characters are smart and have a bored go with the flow attitude. Utawarerumono is a much better anime though with great drama.  It has some oddities that may not appear in world end and World end has better animation.