WorldEnd: What do you do at the end of the world? Are you busy? Will you save us? - Reviews 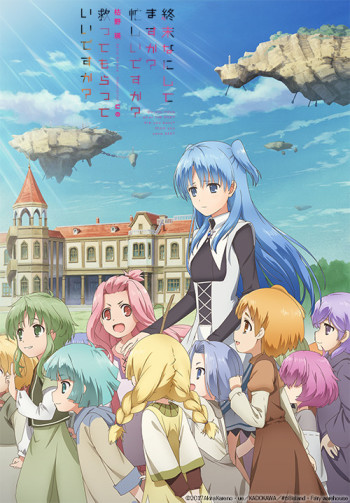 Shuumatsu Nani Shitemasu ka? Isogashii desu ka? Sukutte Moratte Ii desu ka? (hereby known as SukaSuka) is a fantasy tale that, looking at it in a certain light, may sound familiar. A band of heroes group together to fight against gods. The leader of the group, Willem Kumesh, isn't talented or strong in any respect, but he will win a fight no matter the odds. He's that kind of hero. Well... He was that kind of hero.
That was 500 years ago, and nowadays there are no gods to fight, and there are no humans to do the fighting. Willem, upon defeating the final boss of his adventure, was cursed with paralysis. When he finally wakes up he appears in a world floating in the sky, full of furries, and as the last human in existence. This hero of humanity struggles to find meaning in a world without humans, but one day he gets called for a job in a military warehouse, a job to take care of some weapons... Weapons that appear to be human children.

Willem is an interesting character. This is the hero of your typical JRPG (passionate, brave, and ready to help the greater cause) living life after completely failing to save the world. As you'd expect, he's a bit of a downer. Everyone he ever knew is dead, he's a creep to the furry majority known as society, he has nothing going for him anymore... It really shows. His eyes are cold, his expressions are flat, his outlook is harsh. And then you sit him next to a little kid and his world lights up. Whenever he's around one of the children he is all smiles, full of jokes, super caring, he's like a parent.
This guy is two characters in one. Sometimes he's a scary guy who misses fighting and has no reason to live. Other times he's a doting parent who prides his children over anything else. In case you haven't realized, this is at complete odds with my description of his young hero self. Seeing flashbacks of his past self in comparison to his present self is startling, but very interesting. If you have read Fate/Stay Night, this type of character may seem familiar to you. This show as a whole is pretty comparable to F/SN actually, so this might be a thing for Fate fans.

So a good main character is the first positive. What's next?
The sounds! The music! Not the voice acting, but hey, 2 out of 3 is good. I don't know how much I can clarify about the music, it is just really well placed and nice to listen to. I wouldn't call it breathtaking beyond the first episode, but it is really good. The voice acting is standout in a few scenes, but for the most part it is nothing impressive, typical overly-anime voices. There's some cool sound effects going on at times. I noticed some trippy echoes at certain unnerving moments that I can see people easily overlooking. That was cool. There's also some really great decisions with a certain creepy kid voice in this show.

Okay, now let's talk about the reasons I didn't rate the show super well despite liking it a lot. There's a strange conflict with the show's core. On one hand, it feels like what you'd expect from a Light Novel adaptation, full of the typical tropes and terrible pacing. On the other, it has a lot of legitimately good things that stem from both the source material and from the additions of the anime format. I love a lot of the things in this show, but due to the limits of a 12 episode anime, all the elements either feel simplified or lead me to believe I'm missing information. Certain scenes have little emotional impact or feel like they came out of nowhere because the pacing is so messed up. Months pass in the blink of an eye with no notice. Half-way through the show half a year has passed, but I bet if you asked someone about the time frame of the show they wouldn't guess it spanned that long.

The animation isn't great. It has some good moments, and there's a bunch of cute character designs in there to take screenshots of, but it just isn't very impressive in motion. There's some good (albeit cheesy) composition throughout the show, showing us the relationships of the people conversing and giving us an outlook on their mentality, but it falls down to the basics of putting people eye level or walking them out of shadows. The framing of shots is top notch however, and your eyes will be directed smoothly from focal point to focal point. It is rather pretty in that regard.

Outside of the main character, there's not much going on with the cast of this show. There's a lot of cute young girls, but they get by mostly on visuals. There are 4 notable children who have really great and consistent personalities, but they are minor characters unfortunately, and instead the main story focuses on less-defined characters.

It seems like an amazing story though, so I may have to pick up the Light Novels for this. Definitely some of the best material I've seen from LNs. I wish it had gotten the two-cour treatment.

I love this anime but the ending broke my heart will not say why due to respect of people that want to watch it but if you do. This is what you need, tissues and comfort food lol.

I cried so much espeically at the end heart broken.

I give this anime a 4.5 star rating due to the ending if the ending was different it would be 5 stars.

i recommend watching this anime. i must warn you, however, that this anime is quite a tragedy. i don't mean this is a terrible show, quite the opposite actally. i mean tragedy in the sense that there is no happy ending. in fact, the ending is extreemly sad. fair waning.

THE STORYLINE IS BELOW!!!!!

Here are my thoughts on it. WARNING THIS ANIME HAS A LOT OF WHAT YOU CALL THE FEELS!!!!!!

The story is about this  this guy who is the only human left and is called a desfeatured becuse all the other people have ears tail horns ad other animal and mystical creature part.

The guy gets a job at this pays to take care of Leprechons (which have fairy wings which i don't understand) and they don't fare death for some reason.

They are leprchons and don't fare death which makes them the untilmate sacrifice because they can use certain types of swords that only they can use.

Well this guy the MMC has t look after them but most of them are children and don't fight (yet)and the male mc has sometype of past which is confusing i guess.

WHY!!?? Why the ending urgh I have just cried my eyes out watching this. I thought it was going to be good when they said they were going to get married.