World Break: Aria of Curse for a Holy Swordsman - Reviews 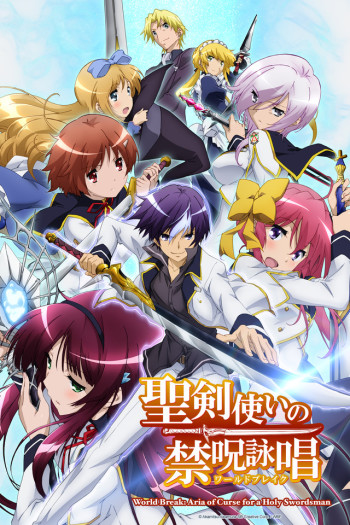 As a rule of thumb, if an anime has panty shots and boys have their faces thrusted into large teenage bosoms within the first ten minutes, then firstly it's for 9 year boys who get titilated by that sort of thing, secondly it will have a tired and over used storyline and thirdly it will be utterly boring!

It's the start of a new season of anime and I get all excited by what interesting shows are going to be starting out. Last night after pretty much exhausting every other new series, and let me tell you, it's poor pickings so far, I came accross Seiken Tsukai no World Break. I decided after reading the synopsis to give it ago, even though I was less than inspired. Now I am not only uninspired but have screeching, shrilling memories of this show and feel compelled to save everyone else from this torture.

So the premise (Spoilers - and I use that term loosely, as you will not be spoilt) We enter a world where some people have memories of their past lives. These people become Savours and go to school to learn to use they powers to fight evil. Enter boy who in his dreams remembers not only his past life but the one before that too, and is uber special, but doesn't know it. He enters a school and instantly has a girl with pink pony tails who remembers him as her brother in her past life, so feels she must seduce him. Then low and behold another girl, who is asleep thrusts this poor defenseless boy's head into her cleavage, she is so strong that he is unable to remove herself from such a terrible and horrifying predicament. Moving dramatic along, the students are now in their first class where they have to bring out their magic light. Boy is unable to do it, but his past life sister can, and in doing so gets into a fight with the class bully, who she vows to defeat...... She loses and have half her clothes. Later big bosomed girl cheers pink ponytailed, past life sister girl up by thrusting the boys' head into her chest again, while inadvertedly insulting pink ponytailed girl's modest mammilla. Later (a minute or so) boy decides to regain small chested sister's honour by fighting with the bully. He is on the ropes, but suddenly when all hope seems lost, he remembers his past lives and shows the greatest power the universe has ever seen and defeats the bully. By coincidence this happens in front of the very, very large chested head mistress who then gets him into a elite group of fighters.......I couldn't at this point manage any more excitement and have regretfully had to drop the series!

Basic style animation. No sign of beautiful skys or backgrounds, but I did only watch one and half episodes.

Lacked any real dimension or originality.

So....The idea of past lives isn't a bad concept, it was why I thought I would have a look but Diomedea didn't grow on the idea and give it depth, which is disappointing. I have watched two other productions by them; Gingitsune and Mondai-Ji-tachi ga Isekai Kara Kuru Sou Desu yo? which were pretty good. Though the later was also very sexualised towards the prepubescent mind, but the story was original. I am obviously not the target audience for Seiken Tsukai no World Break and someone else may give this anime a glowing review and I will enjoy reading it.

This anime is great and I hope there is way more. The characters are very funny and good and the main character does have the normal over powered like in every other anime but its really cool how they expand on it. The idea they have come up with for the story and characters is really cool. You could make lots of story lines out of what they have to play around wiht. I hope this anime keeps getting made over all

The charakters are really easy to understand (emotionaly) and are very passionate. The story is easy to keep track of and it gave me goosebumps and made me hoping for a second season. I love watching these types of anime and would love to hear from others recommending these types of anime to me. :D Great anime to watch so please support my idea of a second season. XD

Thanks for reading my review on this amazing anime!!!

Overall it's fun to watch, decent enough story, no an overkill amount of fanservice, well animated.

Overall, I thought it was a decent anime. It has a lot of faults, but I'm still hoping for a second season. I do stuggle with 12 episode animes though because I feel like most of them don't work in such a short time as well as they could if they had more time.

Story- The story is a bit more complex because it doesn't take place in the real world and the setting has to be explained. I enjoy animes that take place in a made up world, but when there are only twelve episodes, it's hard give the audience a full understanding of that world. Still, they didn't do a bad job. There is a lot more they could have explained and a lot more detail they could have gone into, but I'm hoping there will be a second season and that will take care of it. The story does skip around some too. For instance, at one point, without any explanation as to how it started or what happened, an episode starts and the main character is in a different place than the last episode. It's hard to explain without giving away part of the story, but you will know when you see it. Even if it does skip around, it's not nearly as bad as SAO. It's not skipping years or anything. I think they just cut some material out to make it fit in the twelve episodes and therefor it's a little choppy.

On the other hand, I found myself on the edge of my seat excited or in suspense while watching this show. Overall I enjoyed it despite several flaws in the story line. The main thing I disliked was how they could always be healed so easily. That's just a pet peeve for me though. Unfortunately, most stories either let the characters go crazy and somehow never injur themselves, or have a cheat to heal them quickly. This is one of those, but if I hated every anime that did that, I would only like about five animes. Like I said, I enjoyed it overall and I want more.

Also, before I move on, there is something else I want to say. Yes, this has a reverse harem with a bunch of girls in love with the main character. Yes, the main character does get his face thrust into a girls big boobs more than once. Yes, there is a small bit of romance and a bit of mature talk I guess you could call it, and one naked girl. However, don't just count this anime out because of that. Compared to others, this one really isn't that bad. There is a lot more to it than all of that. Besides, I don't think it counts if one of the girls was his wife in his past life and the other his sister.

Animation- The animation was normal. It was ordinary. The colors worked. It wasn't overly special.

Sound- None of it was annoying. I did like that there was more than one language used. I feel like that is being done more now. The only issue I had with that was it wasn't constant. Still, if a Russian was speaking, it was sometimes in Russion. There was some English spoken too. The end of the spells were often in English. I could hear the rest of the spell well enough to identify what language it was in though. I just wish the people subbing the episodes wouldn't put the English subs overtop of the Japanese subs.

Characters- The characters could have been better developed, but again, we are dealing with a twelve episode anime. If the characters aren't at least a bit steryotypical, they end up feeling undeveloped in short animes. In other words, there isn't time for them to be overly special. I would have liked more back ground on the main characters past sister and past wife, but I would have liked to know more about him too.

Overall, I enjoyed this, especially at the end so I am giving it an 8. I wish I could review this a little more but my hand hurts so I have to cut it short :(

I recomend this anime.