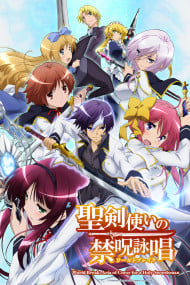 Witch of the Netherworld

We are the Summer

We Are the Swords of Salvation

The Demon Sword and the Holy Sword

The Nightmare From the Previous Life

As a rule of thumb, if an anime has panty shots and boys have their faces thrusted into large teenage bosoms within the first ten minutes, then firstly it's for 9 year boys who get titilated by that sort of thing, secondly it will have a tired and over used storyline and thirdly it will be utterly boring! It's the start of a new season of anime and I get all excited by what interesting shows are going to be starting out. Last night after pretty much exhausting every other new series, and let me tell you, it's poor pickings so far, I came accross Seiken Tsukai no World Break. I decided after reading the synopsis to give it ago, even though I was less than inspired. Now I am not only uninspired but have screeching, shrilling memories of this show and feel compelled to save everyone else from this torture. So the premise (Spoilers - and I use that term loosely, as you will not be spoilt) We enter a world where some people have memories of their past lives. These people become Savours and go to school to learn to use they powers to fight evil. Enter boy who in his dreams remembers not only his past life but the one before that too, and is uber special, but doesn't know it. He enters a school and instantly has a girl with pink pony tails who remembers him as her brother in her past life, so feels she must seduce him. Then low and behold another girl, who is asleep thrusts this poor defenseless boy's head into her cleavage, she is so strong that he is unable to remove herself from such a terrible and horrifying predicament. Moving dramatic along, the students are now in their first class where they have to bring out their magic light. Boy is unable to do it, but his past life sister can, and in doing so gets into a fight with the class bully, who she vows to defeat...... She loses and have half her clothes. Later big bosomed girl cheers pink ponytailed, past life sister girl up by thrusting the boys' head into her chest again, while inadvertedly insulting pink ponytailed girl's modest mammilla. Later (a minute or so) boy decides to regain small chested sister's honour by fighting with the bully. He is on the ropes, but suddenly when all hope seems lost, he remembers his past lives and shows the greatest power the universe has ever seen and defeats the bully. By coincidence this happens in front of the very, very large chested head mistress who then gets him into a elite group of fighters.......I couldn't at this point manage any more excitement and have regretfully had to drop the series! Sound Awful, whiney, high pitched voices. Generic background sounds. Animation Basic style animation. No sign of beautiful skys or backgrounds, but I did only watch one and half episodes. Characters Lacked any real dimension or originality. So....The idea of past lives isn't a bad concept, it was why I thought I would have a look but Diomedea didn't grow on the idea and give it depth, which is disappointing. I have watched two other productions by them; Gingitsune and Mondai-Ji-tachi ga Isekai Kara Kuru Sou Desu yo? which were pretty good. Though the later was also very sexualised towards the prepubescent mind, but the story was original. I am obviously not the target audience for Seiken Tsukai no World Break and someone else may give this anime a glowing review and I will enjoy reading it.

This anime is great and I hope there is way more. The characters are very funny and good and the main character does have the normal over powered like in every other anime but its really cool how they expand on it. The idea they have come up with for the story and characters is really cool. You could make lots of story lines out of what they have to play around wiht. I hope this anime keeps getting made over all

The charakters are really easy to understand (emotionaly) and are very passionate. The story is easy to keep track of and it gave me goosebumps and made me hoping for a second season. I love watching these types of anime and would love to hear from others recommending these types of anime to me. :D Great anime to watch so please support my idea of a second season. XD Thanks for reading my review on this amazing anime!!! 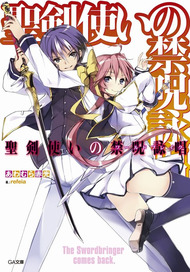 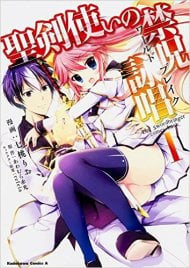