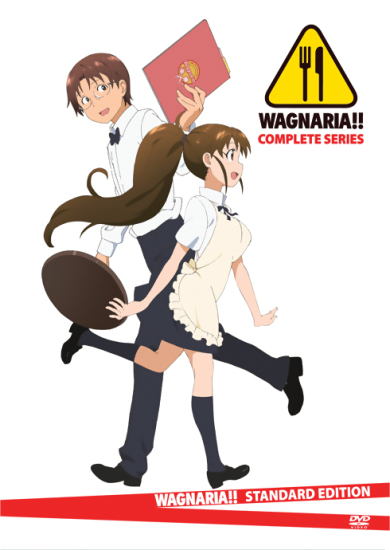 In a corner of Kichijouji, there's a small café where five good-looking young men work... but there's no end to the trouble they cause! Glasses-wearing clean freak Tarou; the womanizing Maki; the ever-penniless Toku; Jun, whose cute face hides terrifying strength; and Minagawa, the patissier who's rumoured to know voodoo...What sort of ruckus will these five cause today?

"Irasshai!" Welcome to the most unruly cafe in Kichijouji and its charming staff of five who have absolutely nothing in common. When tempers rise, so do mop handles, giant boulders and repair bills. Meet Jun, a mild mannered high school student with a sharp tongue and superhuman strength. Tarou, a clean freak with a deadly aim in the art of mopping. Maki, a sloppy, lazy woman chaser. Minagawa, a talented pastry chef equally skilled in the arts of voodoo, and the impulsive, cheerful, though desperately unfortunate Tokumi. A feast of comedy based on the popular Japanese radio drama.

Azuma is a skilled French chef working at a top-notch hotel. One day, he's requested to offer his culinary skills at a shop he frequents. Not only are the customers varied of age and profession, but some regular patrons have quite the demand too! Furthermore, a love story instead of a dessert order?! By way of declining the strange request, Azuma inadvertently revealed that he's gay! In addition to that, the editor Kumoi is also having a long-distance lover's tiff here!

Tomaru Harukaze is extremely shy and terrible with any kind of social interaction. His worried mother sends him to live with his grandparents in the countryside—born and raised in Tokyo, Harukaze worries he'll have trouble adjusting, but that's not the worst part: he will be starting a part-time job at Restaurant Bell, where his grandmother is a regular customer! Not only will he have to learn to interact with customers, but he'll also have to learn to get along with his quirky coworkers.

Yae's living her dream, working at the toiletry maker Lilia Drop. Little do her coworkers know, the reason she loves the company so much is that she's ashamed of her body odor, and their soap is the only thing that does the trick. So when the company's lead product developer, a perfuming genius, approaches her in the lobby and wonders what "that smell" is, she's terrified... but could it be... that he likes it? And, even more surprising to Yae... does she like him?