Working!!! Lord of the Takanashi - Reviews 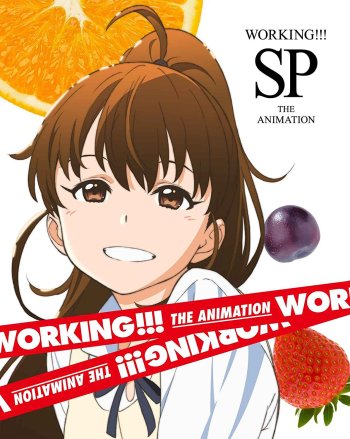 Working!!! Lord of the Takanashi is the final instalment of Working!! otherwise known as Wagnaria. Since it's the final chapter this review will mostly not refer to anything in particular. I won't go deep into the quality of the animation, voice acting or characterization. As most of you will already have noted this final piece in the Working!! franchise is getting a high rating from me. I'll tackle why in this very short review.

As the finale of ''Working!!'' it ties up the plot that has been one of the main threads in the series for a long time. It takes time do this with an extra long episode and even has a little epilogue to please those such as myself to see what happens shortly after the climactic moment. Characization has been consistent in this series and in the finale this is not different. Voice acting, animation and sound all hold up, the animation actually is slightly better than most of the 3rd season.

What this does is wrap up all loose ends that have been left and it does so in a convincing enough manner. While the comedy takes a back seat it's not absent with some quite funny moments between various members of the Takanashi household and other cast members. The way everything ends is somewhat surprising in what comes before the climax but the climax itself is what most people were probably anticipating.

The epilogue fills a bit more comedy into the series while giving us a last glance at what we or at least I liked about the series. In the end if you liked Working!! up to this point you'll certainly be satisfied as it simply has a satisfying ending an ending that it deserved.

In the end, what I am saying is this: If you like Working!! the ending is fullfilling. If you want to watch Working!! it's one of the few comedies that has a proper ending which is a massive plus in my eyes.

The OVA finale of the Working! franchise, Lord of the Takanashi (which petite-senpai Poplar butchers as Load of the Katanashi in the final episode of the third season) cleans up the mess that still needed to find resolution.  This special runs twice the length of a normal Working! episode (50 minutes) and is the definite final word on the characters which charmed people for three years in manga and anime.  As for the follow-up series  www.Working!! ... who are those people?

Three themes ran their course as those loose ends found their connections:

The roaming delinquent Aoi Yamada.  Needing to find her way back home, she strikes a balance between benefactor Mr. Otoo (who finds his wife ... then loses her ... then finds her again ... then repeat, repeat, repeat ...) and her true mother, between quasi-brother Souma and her real brother Kirio (big mystery for me in watching Working! … for a martial artist, Kirio usually has his butt kicked by unimpressive Souta).

The need to build confidence in Poplar.  Yachiyo and Kyouko try to groom her to be the next floor chief waitress, but Poplar's small frame makes her the target of people who take her for an elementary schooler if not a middle schooler.  Souta's younger sister Nazuna is a middle schooler and is taller than Poplar (come to think of it, she's taller than brother Souta).  It's for the whole crew at Wagnaria Restaurant to cheer up the short girl to take on the responsibilities of chief waitress ... because she can do it!

The thirteenth episode of Working! 3 ended with Souta and Imani's date ruined by Souta's mother (the words 'creepy' and 'mother' never seem to fall in the same sentence, and definitely not next to each other.  But Souta's mother?  Aaaagh!).  Suddenly, Souta no longer works at Wagnaria, and it is up to Inami to battle Souta's four sisters (wimps, all of them!) to save Souta from 'mommy dearest's' clutches.  This story element of Working! is the key to the whole series, as season one has Inami belting Souta consistently, often, and well-done!  Season two has Souta act more like a dog-trainer with Inami, having Inami wonder if Souta really likes her, seeing that Inami ... well ... you know ... she's crumbling!  Season three has Souta and Inami in a crash course on true love ... but then along came Mommie.

Lord of the Takanashi saves all this mirth and mayhem, and for this I am thankful.  While a longer treatment of the comic cast of characters, it uses the same techniques and music to offer one more round of thanks to the audience that had supported the first run between 2010-11 and then the third season in 2015.  Finally, in a series which beat to death the same old humorous gags for two seasons brought it all home in the third season.  And this OVA tied it all up with a nice bow.

I was really looking forward to this finale since the end of the original series left us with a huge cliffhanger.

So what did I think about the finale of Working!? Well this special was a worthy end for this series. About all the story lines were already resolved in the 3rd season but we get an extra confirmation on those in this special. Like the relationship between Satou and Yachio or the reunion between Aoi and her mother.

But the storyline that mattered the most in this finale was of course the relationship between Takanashi and Inami. Now the build up towards their climax was kind of weird but so typical for Working! And than the climax itself. After 3 whole seasons there was finally the moment that we’ve all been waiting for and that we knew would happen from the first episode. I was literally cheering when both of them finally found the courage to confess their feelings towards each other.

I still find Takanashi and Inami to be a really cute couple. Now they weren’t the most original couple because let’s be honest we all knew they were going to be a couple from the first time they met. But still they were so adorable together.

Now if I may give one point of criticism: I expected more from the final climax between Takanashi and Inami. To be honest I expected at least a kiss between the two of them because now I was left a bit empty handed.

But besides that I found this to be the perfect ending to a very fun serie. Working isn’t a serie you have to watch for an amazing deep storyline or characters with very complex personalities. This is a very fun and heartwarming anime that you watch to have a good time. I gave the series a 4 out of 5 star rating so it’s definitely worth checking out.