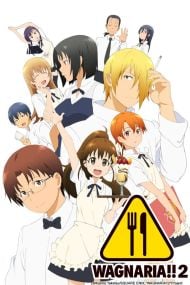 Life at Wagnaria continues as it ever has, with its oddball staff causing more mayhem than ever. While Poplar continues to be plagued by her height complex, Satou takes every opportunity to tease and trick the gullible young waitress. And with Inami continuing to run for cover whenever men frequent the restaurant, Kyouku munching her way through parfaits all day long, and Yamada’s clumsiness massacring the crockery, it’s a miracle that the customers are served at all…

Story Working!! nearly wore out its welcome when it first aired. As the season wound down, the emphasis on Takanashi and Inami’s relationship began to consume all the screen time, reducing the fun and episodic slice of life series to a monotonously dysfunctional romance. So. Should we watch a second season when the first seemed to run out of steam? OF COURSE. With the two “leads” at a sort of developmental detente, Working'!! explodes in a bunch of different directions caused by a significant increase to the size of the show’s cast. Each new character brings with them new subplots and relationships, which causes the show to adopt a more episodic feel despite the number of running storylines; on the whole, this new blood helps the show feel fresher week in and week out. To coincide with the less focused narrative, this season uses the easily-distracted Yamada as its lens instead of the first season's more focus protagonist,Takanashi. Her nosy nature and excess of enthusiasm allows her to insert herself into any developing action while still remaining the delightful butt of every third joke. After all the new introductions and inside jokes, the show wraps up on an episode that recalls slightly the vaguely similar (and by “vaguely similar” I mean both shows involve food) Muteki Kanban Musume, where a silly mix-up offers an opportunity for the entire cast to riff on their character failings in tandem. Episodes like this one, while they become exhausting if they occur too much (I’m looking at you, Nichijou) can provide a perfect send off for a character-driven series and also provides a much better wrap-up than last-season's. AnimationWorking'!! showcases improved motion and character detail which actually improves the comedy overall. This time around, artists place a greater distance between the deformed iterations and the characters in their “normal” state, which enhances the effect of all punchlines that use that visual trick. While the restaurant remains as detailed and interesting as before, the outside environments suffer a little and betray a lack of concern on the part of the animators. But since stellar visuals have never been a hallmark of this series, those lapses shouldn’t bother anyone overmuch.Sound “Coolish Walk” is no “Someone Else” (have I managed to stick both songs in your head?), but it more than serves. It shares the same rhythmic cheeriness as the previous OP, but turns the manic energy down a click or two to fit with “familiar” feeling of the new season. The accompanying ED, “Itsumo no You ni Love & Peace”, keeps the mildly nostalgic vein of the the final ditty from season one. fills your head with funky disco beats and have you shaking your rear along with the closing credits in every episode. The voice cast has it dialed and it shows. This time, however, it’s Ryou Hirohashi who carries the show via Aoi Yamada’s starring role. Ms. Hirohashi has managed to master--like Aki Toyosaki and her cast-mate Kana Asumi--the fine art of laying on the sugar without becoming shrill. Her role requires her to ham it up hard, changing emotions on a dime and maintaining her character’s irrational enthusiasm, and she rises to the challenge, setting the tone for the series much in the way that Jun Fukuyama did for the first season. Everyone else reprises their role with admirable skill, bringing the staff of Wagneria to life in the same enjoyable fashion as before. Characters Say what you want, but Yamada glues the series together. As mentioned above, it’s her viewpoint that defines the season and her quirks dictacte the comedic pacing here. While she’s not as universally loveable as some of the more modern boke-type characters (Hakase and Miyako remain the best versions of that archetype), her combination of selfishness and thickheaded blundering makes for a neverending font of one-off gags and b-plots. In addition, her earnest nature and loneliness make it possible to root for ever, even if her sense of entitlement makes you relish every inconvenience or humiliation she suffers. But once again, it’s the seamless introduction of new blood that defines the series. While some of the additions are spoilerous, this season goes out of its way to introduce a pair of semi-reformed thugs from Kyouko’s bancho days and their interaction with existing cast members crackles with new sparks of humor. Each one display their own particular brand of crazy in addition to their defining antagonism, shedding some light on the kind of leadership the manager exhibited as a bancho. And their synergy with the Wagneria staff makes them all the better: Mitsuki stirs up more love-interest trouble in a show that needs more active participants on that front; and Yohei provides a perfect foil for the lusty and violent Kozue-neesan who really, really needs a man in her life. OverallBetter. Better. BETTER. Working'!! took everything that made its first season so great, added a few new spices and reduced it over low flame into a delicious sauce before applying it a new cut of plot. The resulting dish should delight the palette of any slice-of-life fan who enjoyed the first season.

This review is actually for the second season of Working!! This review will contain a little bit of spoilers so plz don't read if you haven't seen the second season.Working!! is definitely as hilarious as the first season was, if not more funny! A-1 is still doing the animation for the second season and its as amazing as ever! The dialogue, being the most important part, is THE BEST PART!!! OMG how funny can this show get!! There are subtle things in the show that just make the more obvious things that much more hilarious, which just adds another reason to watch this show again haha.Now for the only thing that I didn't enjoy about the second season. **SPOILERS**For the people who were looking forward to seeing how Inama-san and Takanashi-san's relationship develops or waiting to see them get together, it just didnt happen. As far as the romantic aspect of the show, it just served as a sub-plot and only got developed a little bit. Same with the relationship with Sado and Yachiyo, it didn't get developed at all.

Going into season two can be exciting for an anime.  To see how the story moves forward, how characters develop, how new situations advance ... it makes for anticipation for the things unexpected. But we are talking about Working!!  Granted, the manga which spun the anime was popular through the first half of the 2010's.  When the manga stops publishing, the anime goes THUD.  Thus spake the anime gods. The humor of Working!! rests on the daffiness of the characters, and this cast basically does more of the same seen in season one.  Souta still is obsessed with things tiny and cute.  But the ladies in his life have been growing on him.  The four sisters (the control freak, the morose writer, the voluptuous lush, and the dependable youngest sister) all tower over him, and Souta fears petite Poplar is inching up on him.  Poplar still is mistaken for an elementary school student whenever she is not taken for a middle schooler.  But she looks to her next year when as a third-year she takes exams for college.  Her time at Wagnaria is limited.  Mahiru still has a phobia over males, and her right cross still can level Souta (her favorite target), but she strives to get over this violent streak.  She likes Souta, but she thinks he is treating her more like a dog-trainer.  Jun is still an intimidating personality (Poplar his favorite target), but head waitress Yachiyo fluctuates her feelings towards him and manager Kyouko.  Kyouko still eats like all the food in the restaurant is hers.  Souma still has this innate ability to know everything about everyone, and he is beginning to get sadistic in his treatment of the staff.  Little lost girl Aoi Yamada still tries to get attention from everyone at Wagnaria, but there is the threat of another Yamada, a suspected brother Kirio who floats in and out in search of his sister. Basically, the same business as the first season, with the addition of delinquent siblings Yohei and Mitsuki Mashiba coming to the aid of manager Kyouko.  Also, the missing wife of owner Otoo pops in and out.  And this is the flaw of season two.  The new stuff just flutters in and out, attracting little interest.  The old shtick grinds on and the fresh humor just doesn't get the chance to liven up the plot. The anime technique remains standard.  The voices of Jun and Souma has that sinister twist that makes them perfect.  The voice of Poplar is sweet and bumbling together.  Yachiyo is sweet and confused.  But Souta's voice is grating, and as he tries to be bossy or freaks out over cute getting too tall ... he loses it.  But the music sparkles, particularly the opening Coolin Walk. Working!! is comedy with its high points and low.  We do have characters who can carry the gag, but sometimes the timing is off, or the material is starting to stale.  But the prospects for season three are set.  Will there be love links for Souta and Mahiru, for Jun and Yachiyo?  Will Poplar get respect?  Does Yamada blood course through Aoi's veins, or is this more of her deceit?  And what of the new (normal) waitress Matsumoto, what's her angle? But the most important question:  Will season three be a bust?  Season two sure was. 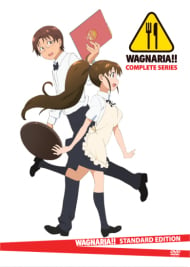 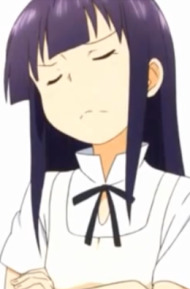 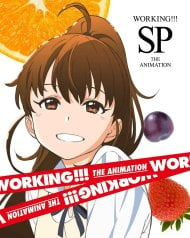 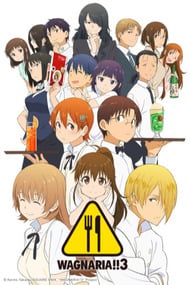 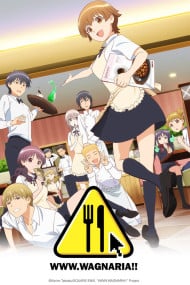 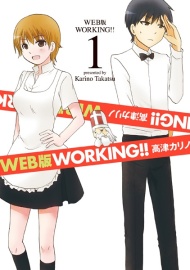 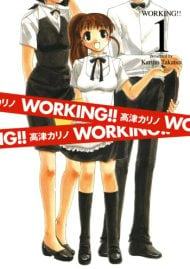 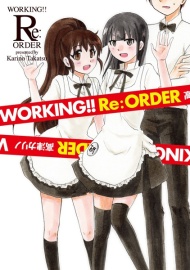