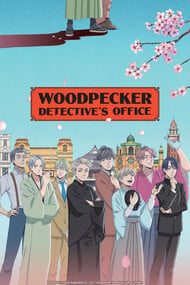 It is the end of the Meiji Era. The genius poet Ishikawa Takuboku, who’s struggling financially, starts a detective business out of his lodging in response to a certain murder case. He calls it the Woodpecker Detective’s Office. "The ghosts of the Twelve-Story Tower in Asakusa," "the man-eating figure who wanders the streets on snowy nights"... Takuboku involves himself in one bizarre case after another with his hometown acquaintance, Kindaichi Kyosuke, as his assistant.

Strange Stories of the High Tower

Over Many Mountains and Rivers

The Hour of Demons

ANIME LOTTERY GAME SPRING 2020 I was initially excited for this anime. I love detective animes with their own unique spins, and this anime fit into that category. Sadly, the writing was just a little too dry for me to get engaged enough to want to continue watching, but of course, I watched the whole thing anyway, because I didn't really have a choice this time.  The one thing I did really like about the anime though, was the ED and the OP, because they were really nice to listen to. As someone who plays old fiddle music, it was fun to hear old fiddle music being played throughout the show.  The art style was simplistic but pleasing.  The two main characters have an interesting relationship with interesting interactions, but it deferentially wasn't the healthiest friendship I've ever seen.  Would I recommend this anime to anyone? Going to be honest, probably not, but if you're looking for something you can just play in the background while you work on something else, then this anime is great for that, because it's slow-paced, and not too flashy. You can look away from the screen for a few seconds, and not miss anything important, and you know what? Sometimes shows like that can be good to watch. While this is a pretty negative review, do I hate this show? No. It had its moments, and it's not intended for audiences who like flashy things, and while it was dry and long, it wasn't bad, it just failed to hook me, and I'm sure that there are people out there who would actually really enjoy this show.

Now I just finished watching this anime like 5 minutes ago, and I have this "thank god I'm free!!" kind of feeling, but at the same time, I am actually surprised with how much I liked this anime. When I saw the rating, I was really sceptical but seeing as some of my favourite seiyuu (mainly asanuma shintarou lol) were in this, I decided to give this anime a chance. Now I am not saying this is the best thing since sliced bread, but I will say this wasn't too bad.   For the story, I personally feel that it was pretty decent - just a bunch of mysteries that needed to be solved. That was literally it. I love a good mystery, and while saying this wasn't the best one, it was good. I do prefer when there is more than one mystery story/case within a detective/mystery anime, so this already hit the mark for me. I know a few people have mentioned that this was boring or very flat, but I personally felt that it was okay. No, I wasn't hooked but the whole premise of each mystery was good enough to keep me interested. Not to brag, but I am very good at spotting a culprit so for me some of the criminals were obvious, but idk if that means that it would be obvious to everyone.   Where this anime really shines is the animation and sound, hands down. I think the animation is quite beautiful and bright. Not a lot to say on animation, because it really is just gorgeous and very high quality. The characters are all really pretty too. The sound was just great - the voice actors did an amazing job with this anime and it is a shame that asanuma shintarou doesn't get more lead roles or anything, his voice is really nice to listen to. When the poetry was being spoken, it was just so soothing. All the VA had really lovely voices, so the anime was extremely pleasant to listen to and they did really well with conveying emotions. I honestly loved the op and ed - especially the op it's an amazing song - it is actually a shame that they weren't used in a better anime (lol) but that is that.   Now the characters were just alright. The main characters - Ishikawa and Kindaichi - have the worst relationship like ever. You can literally hear the alarm bells ringing and see the red flags waving and if you are waiting for it to get better - it doesn’t. Kindaichi has some sort of love? fixation? for Ishikawa which allows him to easily be manipulated by Ishikawa, so Kindaichi will give his money to Ishikawa and doesn't break off their bad bad relationship. Ishikawa is literally scum. In the 3rd episode he gets mad at Kindaichi for not understanding someone’s feelings for Kindaichi and gets Kindaichi framed for murder, like?????? How do you bite the hand that feeds you? After everything Kindaichi has done for Ishikawa, what could possibly possess Ishikawa to even CONSIDER pretending that Kindaichi murdered someone. Even then, how do you remain friends with someone who tried to put you behind bars??? He doesn't even see Kindaichi as a friend. Despite me not completely hating Ishikawa because he is actually rather interesting as a character, I would have definitely beat him to death at least 7 times - and that's just for episode 3. The side characters were really interesting, I am kinda mad they didn't get a lot of screen time. I especially liked Yoshii and Hagiwara, they are pretty nice and rather funny. That being said about the side characters, if you asked me to name them I literally couldn’t. I only remember Akutagawa and that’s because of bungou stray dogs. Despite my urge to fight Ishikawa every second, it didn't actually make me hate the anime.   All in all, if you want to know whether you should watch this or not, I will say go ahead and then decide for yourself if you like it or not. I personally liked it a lot more than I thought but if you are looking for that excellent mystery anime that makes you want more, this isn’t the anime for you. Straight up. But still, it is not a bad watch. 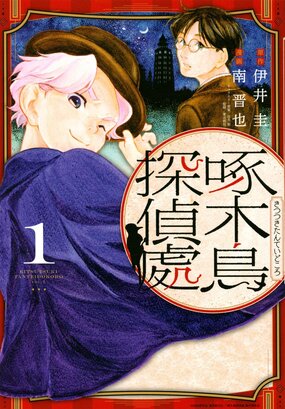