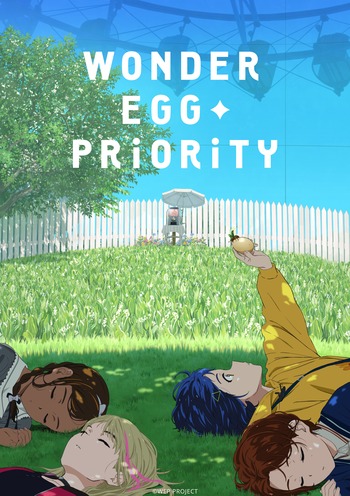 Girls fighting against physical manifestations of their inner struggles with magical powers in order to fulfill a contract. Certainly sounds familiar...

They both had a like cursed contract which from all ways everything would always end to a bad ending.

From what I've watched so far, the plot is really similar. The motives, the characters, the relationships too! I enjoyed both of them and I would recommend them to anybody who likes dark-themed animes.

Both are magical girl anime that deal with dark themes such as suicide, and focus on a small group of magical girls, who sometimes fight together, Or fight/argue with eachother, and have varying reasons for fighting.(although not necessarily both to the same degree of all these things) with a significant part of it being the interactions between them.

Shows are just deconstructions of the magical girl genre. Honestly feels like Wonder egg has at least partial inspiration from Madoka.

The Anthem of the Heart

Jun is a girl whose words have been sealed away. She was once a happy girl, but because of a [certain thing] she said when she was very young, her family was torn apart. One day, the egg fairy appeared in front of her and sealed away her ability to talk in order to stop her from hurting anybody else. Since this traumatic experience, Jun lives in the shadows away from the limelight. But, one day she is nominated to become an executive member of the "community outreach council." On top of that, Jun is also appointed to play the main lead in their musical...

From the first episode of wonder egg priority.. They have a little bit of similar plots I'd say and the thing about eggs and friends is just so similar

The Anthem of the Heart: "What’s inside the egg? All kinds of feelings locked inside. Then, unable to keep them locked in, it explodes."

Wonder Egg Priority: "If you want to change the future, you only need to choose now. Now, believe in yourself and break the egg."

really similiar eggs, friends, dream- fantasy mixed up with reality and the general vibe of both is really identical

Both are anime where the lines between reality and dreams are blurred and the tone can become surprisingly violent. If you enjoy atypical plot structures and high intensity storytelling you'd like both of these shows.

they both have same psychological vibes and overall both creepy, weird (in a great way), skin-crawling animes.

After Satoshi Kon death, i was thinking that his unique style of making anime passed away with him, but Wonder Egg, omg, it's feels just like his works from first moments of series. If your thinking was in similar way , wonder egg can be a relief for you.

Cocona is a model honor student, cautious and slow to embrace new opportunities. This makes life complicated when a mysterious girl named Papika suddenly appears, fearlessly searching for a wish-granting crystal called the “Shard of Mimi.” When fates collide and they're given the ability to transform into powerful fairy-like beings, where will the dangerous journey into “Pure Illusion” take them?

(I am writing this 1 episode into Wonder Egg Priority)

Girl being thrown into some sort of strange agency where she'll have to go to different worlds and fight different bosses to save an old friend.

A lot of similar pastelish aesthetics to FLip Flappers

Probably WLW but school girls with a childlike wonder, most likely wont do any smut

Episode one is just SCREAMING Flip Flappers to me

I love the art style in both of these. They're gorgeously animated, and the main characters are cute. They both frequently fall into a surreal dream world. Wonder Egg Priority seems more focused on the real world, and uses the magical-girl monster-of-the-week dream sequences as an excuse to tell about it (at least so far), which gets a little repetitive with small variations, while FLIP FLAPPERS seems to be mostly about exploring the other side, with the "real" world just there as an anchor to keep you sane, so the dream worlds have a lot more diversity.

Wonder Egg Priority: "If you want to change the future, you only need to choose now. Now, believe in yourself and break the egg."

Wonder egg priority juste reminds me of Black rock shooter for it's main character and concepts. Also the other world thing.

Young girls are fighting against their own demons with BIG weapons in another world. They become friends in reality.

Wonder Egg Priority reminded me of ID:INVADED except that the latter is about detective work while the other is like a dream but they both are so fictional

Both thrillers about children with a very cute artstyle. Both have a pretty dark theme, but a happy and cute vibe. Both anime are also very well executed; good animation ,voice acting ,story ,etc.

Both animes have amazing visuals, female kid main characters, and the mcs are both willing to risk their lives in for their goal. Yet where the animes really shine is the characters. Made in Abyss and Wonder Egg Priority both have a way of making you route for their characters. The connection that the characters share are amazing, they feel real. They're both must watches in my book.

Alternating between surreal and slice-of-life, the tone is somehow mostly cute and bright, despite the dark traumas driving the story. It tugs at your heartstrings, and you find yourself caring for the characters, flawed as they are. Their friendship seems to make their struggle worth it. You have to learn the rules of the game as you go. The premise seem simple, but the execution is layered with nuance. I am, of course, describing both animes at once. If you like those things about one, you'll find them in the other too.