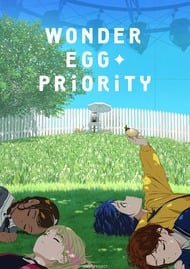 Wonder Egg Priority attracted attention during its airing by having three things that always create traction: beautiful animation, mysterybait and queerbait. Those are enough to hook a lot of people early on, but keeping them invested by the time a show finishes is a whole different story. The pretty colors don’t mean anything if there is nothing going on, the mysterybait becomes hollow if it’s just there for speculating stuff without ever getting rewarding answers, and the queerbaiting ends up being virtue signaling if it’s just representation for representation’s sake. Well, guess what went wrong.There is nothing going on in this show. The initial hook is the characters that are defined by some tragic thing that happened to them and their friends. It’s enough to get you invested in them, but then the show doesn’t do anything with them and keeps jumping from one thing to another without actually going anywhere with them. They mention a lot of problems teenage girls are having, they fight a monstrous representation of the person they fear the most in some dreamland, and then we jump to something else. The dreamland portion is the most intriguing aspect of the show, since it’s full of gorgeous looking fight scenes and a lot of flower symbolism. At the same time it’s also the most bullshit aspect. Nothing is explained right away and you have to figure it out on your own as you watch. The more you watch the more you realize there is nothing going on, which makes theorycrafting to be a waste of time. If you wonder about stuff such as the reason the dreamland exists, who created it and why he gathers the girls and hands them the eggs, the last episodes provide an answer to all that and it’s as lame as it gets. Like, what’s the point of doing all that supernatural bullshit when the solution can be something very simple?Even if you ignore the supernatural aspect of the show and you stick to the slice of life aspect, you are not going to get anything more than cute girls doing cute things, but with a lot of touch subjects, ranging from social anxiety, to bullying, suicide, sexual molestation, and being transgender. But all these issues come down to punching an imaginary bad monster really hard, and then forgetting all about it. There is no consequence in the actual world, since the girls are immortal, they can’t lose, the victims they are saving are never seen again, and on top of that they are not even real. They are possible versions of suicide victims, meaning they are already dead versions of existing people. So basically they are not helping themselves or saving someone’s life. They don’t even bring back to life someone, which was supposed to be the objective. Because the show is left incomplete and nothing is resolved. There is supposed to be an OVA sequel in the future that wraps up the story, but it’s already too late. The show didn’t do anything with its themes and one extra episode after months when most will have forgotten all about the show is not going to save face.So yeah, it’s just another one of those progressive shows that think they are smart because they stuff their plots with first world problems, and as it usually happens they treat the whole thing very superficially by making it all taking place in some fairyland where nothing of substance comes out of it. They do nothing with the subject matter besides teasing the viewer to think about bland characters with zero development. There is no theme exploration, they don’t offer possible solutions to these problems, and therefore the show is not deep. It’s vapid miseryporn for people who take pleasure in the suffering of others. Oh, and the queerbaiting part is pure indulgence. Every girl has the hots for the one who identifies as a boy, as if the creators are telling you everyone will want to have sex with you if you are transgender. The gay aspect of the show comes off as fan fiction for fujoshis. For the rest of us normal people, the show is just pretty colors and bait for seeking lesbian doujins. 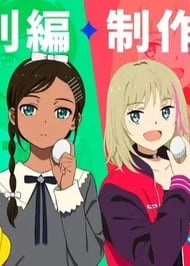