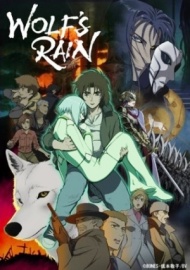 What is perhaps most interesting about this one is how close the anime comes to being a classic without ever actually becoming one. While watching Wolf's Rain, there were numerous times in which I could see the anime approaching the kind of exhilarating grandeur found in titles like Cowboy Bebop and Crest of the Stars. However, the show would always back away at the last minute, as if an invisible wall were preventing it from progressing any further. The anime certainly starts on the right track. I remember fondly of the days in which the average review rating on animenfo for Wolf's Rain was 9.8. If I had reviewed Wolf's Rain at that time, I would have probably given a similar score. The first two episodes are really something else; they introduce striking, memorable characters from the very start, they provide an incredibly promising premise, and they succeed admirably at piqueing your interest. What follows after that, however, is probably the biggest single disappointment for anime in the year 2003. First, character development becomes a mechanical and uninspiring process. As I learned more about the main characters I actually began to like them less and less. All of the four main characters have exactly one item in their backstory which is used to define their entire character, and all of these backstories feel more like afterthoughts than cohesive elements of the anime. Also, voice acting is definitely somewhat stale at times. Although Quent Yaiden is voiced very well (more on him later), some of the others are just barely passable; many talk in a strangely alienating deadpan that makes them very hard to relate to. Also, Toboe's voice actor is feminine to the point of being obnoxious. Also, technical flaws in the animation soon become apparent after the first few episodes; noticeable shortcuts are taken in the characters' movements, and as a result many of their actions seem clunky and stiff. Worse than this, however, are the absolutely terrible character designs of the four main characters. Against the bleak and apocalyptic backgrounds, the chic 90s style clothing is so painfully out of place that the characters often feel totally separated from the environment in which they live. Most importantly of all, the plot begins to become annoyingly tedious and slow. While numerous events occur in each episode, all of them feel strangely irrelevant and uninteresting. Most of these events have little to no relevance with the main storyline and feel almost like sidequests, while the rest seem inconsequential compared to the epic events that were promised in the exposition. Add in the four recap episodes, and I can easily see how many people gave up on the show midway through. However, while the show is definitely a lot worse than it could have been, this by no means makes the series bad as a whole. On the contrary, Wolf's Rain has plenty of excellent qualities that make it more than watchable. For one, Yoko Kanno's soundtrack is (of course) amazing. Though I personally don't like the OP, I absolutely love some of the other tracks. "Heaven's Not Enough" and "Gravity" are both absolutely amazing pieces. Secondly, while most of the characters are mediocre in development and design, Quent Yaiden is an absolutely amazing character. Along with having a remarkably compelling backstory, his character design is fits into his surroundings extremely well. Unlike the main characters, you feel that Quent is very much like the world he inhabits - angry, desperate, and on the verge of death. Finally, the story does a great job of redeeming itself in the final four episodes. Definitely the best part of the series, these can be compared to Grave of the Fireflies and Now and Then, Here and There for their incredible emotional power. By the end of the last OVA, I felt very satisfied with the story, despite the fact that a good deal of it was boring and unfulfilling. All in all, this series is definitely worth watching. Although I did not enjoy the anime nearly as much as I had hoped, the excellent soundtrack and the incredibly good final four OVAs still make this anime better than most.

The story follows a group of young wolves looking for "Paradise" a land ruled by wolves from which the human race was banished long ago. To get there, they must seek the flower maiden, Cheza. Each wolf carries has a rather depressing background, and the sub-plots and character interaction are supurb. Story: The story was creative, if a bit melancholy, and made you feel for every character. Unlike many anime where the lines between who is good and who is evil are clearly drawn, Wolf's Rain allows for a bit of grey area (especially where the wolves are concerned). The story line is beautiful, harrowing, and adventuresome, and takes viewers on a journey to find what everyone searches for: their own paradise. Animation: The animation was well done.The Bones team did a fantastic job bringing to life such vivid characters. Sound: What isn't to love about this soundtrack. The opening and ending sequences alone tell of the sadness and determination of the pack. The music throughout adds to the story. Characters: The wolves act... like wolves. They have their rivalries, their pack order, and their fights. They may have seemed crude, but that's all part of the wolf persona. They all have bakcgrounds that make them who they are now, and each wolf carries his own baggage. I especially liked the tale of Blue. For the humans, I felt they took a backseat to the story of the wolves, but even the human interactions were well done. The only thing that truly puzzled me was the Nobles (beings who apparently didn't descend from wolves), and the wolf-eye of Darcia.   All in all, I would suggest this anime if you want a tale of struggle and steadfast search for paradise.

Story A little heavy at times, but very very good   Animation Absolutely awesome to look at, fits perfectly   Sound The music is excellent; it fits to every part of the show. The dub for this anime is one of the best around   Characters A little cliché at times, but still good   Overall Excellent, but have something light-hearted lined up afterward to watch 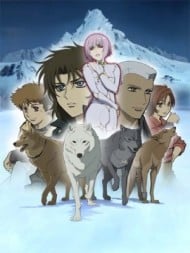 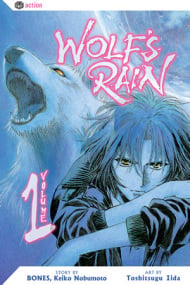