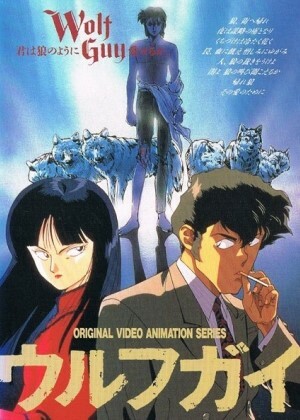 Normally I hate reviews that have a synopsis in them, but this show doesn't have one yet. There is a guy who is our main character. He has a name that I don't care about. He's actually a wolf, and all the governments are hunting him, but the tiger people are going to help him. Also psychics, and they shot his mom. (Thats basically episode 1.)

Wolf Guy is a hard thing to watch. The first two episodes are really clunky and... its just bad.

The story has no mystery to it at all. Someone turns up and you get a full flashback explaining everything about that character that you could ever want to know. The motives are obvious, that action sequences are cliche.

Art is cheap. They have people speak without their mouths moving and stuff like that to cut costs. It is standard 90s look though. Not the worst, definitely not the best. It reminded me of Dan Machi.

Sound? All sound from old anime is garbage. The staticy recordings, the volume randomly changing between scenes. The sound effects being wayyyyy louder than anything else happening, so you turn the volume up to hear a conversation, and are deafened the next second. Typical stuff.

Characters are a packet of cliches, but thats typical in the first two episodes, so whatever.

Overall, only watch this if you are determined to watch every anime with wolf in its name. That was why I tried this, and I couldn't finish.