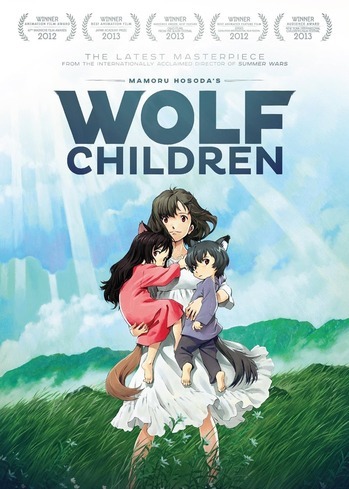 I wasn't really sure what exactly to expect when I heard of this anime. A mother taking care of werewolf children? Sounded pretty damn silly to me, but I gotta say I was surprised in a good way with this film. This movie comes to us from the director of works such as Summer wars and Girl Who Leapt through time, so I had somewhat high expectations and this movie doesn't disappoint.

Story- The story centres around Hana a young women who happens to fall in love with a wolf who can somehow turn into a human and procreate with humans. Now this is where your suspension of disbelief comes in, at first I thought the idea was pretty silly, but as the film progressed, I realized it was actually quite grounded for having a premise thats so out there.  In an attempt to keep things spoiler free, after certain circumstances she has to take care of the two children she had with this wolf by herself and it basically takes us through the hardships they have to endure for about 13 years if I recall correctly.

Animation- While the backrounds were very well renderd and detailed, I can't say the same about the character designs. This was even more disappointing to me considering Madhouse had a part to play in this and there productions tend to be a step above in the visuals department. Theres also a few instances of iffy CGI use. Overall I think the detail of the backrounds makes up for it's weaker areas.

Sound- The voice acting was top-notch, with all the performces being very believable. The music for the most part didn't stand out very much to me, its the regular fare you would expect for this kind of movie, but it gets the job done.

Characters- Proably the strongest point of this movie, all the characters are extremely relatable and almost seem like real people. Despite the odd premise the characters are very down to earth and act how you would expect them to act considering their respective ages throughout the movie. Although, the somewhat rash romance of the Mother at the start could warrant some headscratching. The main characters conisist of Hana the mother, the wolf who she had her children with simply known as Ookami. Her two children Yuki and Ame, as well as Souhei a young boy that Yuki befriends later on in the story. All the characters are well developed and fleshed out, except for the father as he is not present in the story for very long.

Overall- I didn't expect to enjoy this movie as much as I did. Especially considering the length it clocks in at right about 2 hours, but I felt almost completely engaged during the whole time, unlike say something like Letter to Momo, where I deffinitely felt like the movie dragged on for a long time. Overall I think this movie was another great achievement my Mamoru Hosoda and I hope he can continue to put out movies of this quality

This movie was recomended to me by a co-worker. At first I didn't actually got interested in it, but after going to a store and see the novel book and looking at a few pages I became intrigued with the story and I have to say I don't regret watching it. Its a beautiful story of unconditional maternal love with real life struggles.

This is literally my favorite animated film of all time. The story is relatable, realistic other than the werewolves, heart breaking, and soul driven. It's about single parenthood and struggles of being different. The animation is absolutely amazing where the backygrounds are realistic and detailed especially the nature scenes. I love the characters where Hana is a kind, hardworking person as she knows what's best for her children. Yuki reminds me of my younger sister where she was a child, she was rebellious, hyeractive, and stubborn. However, when she got older, she became more serious and concerned. Meanwhile, Ame is not very sociable but is sensitive as I think he's on the autism spectrum even though it was never said in the film.

PROPER MINDSET
Wolf Children is a coming of age movie regarding a young woman as she raises her children. She has a hard time doing that, since the husband died, her parents can’t help her in any way, and the kids are werewolves, a thing that must be kept secret from the others. Sounds weird? Yes. Was it an enjoyable watch? Yes. Was it satisfactory in how it portrayed its themes? No.

THE STAFF
- Animated by Madhouse, which automatically means the movie looks great since it’s made by the best anime studio ever!
- Directed by Hosoda Mamoru, who did several good films in the past such as two Digimon movies, Baron Omatsuri and the Secret Island (by far the best One Piece movie), The Girl Who Leapt Through Time, and Summer Wars. I really like how he combines dark themes in otherwise children’s stories; although this one is one of his weaker works.

PRODUCTION VALUES
As far as looks go, the movie is splendid at showing the way people live in cities and rural areas. The backgrounds are detailed, the characters have smooth animation when moving, and various simple cinematics in lightening effects and proper use of background music make it one heck of good movie to stare at.

This of course applies to very standard uses of technology. Outside the simple wolf transformations, the movie could have easily been made in live action fashion. Meaning, there are no funky special effects or characters with weird clothes and art style. Aesthetically the movie looks normal to the point you can call it bland, a thing which makes it forgettable in the long-run.

SCRIPT
The story is fairly simple; as it is usually the case with coming of age works. The description I gave in the beginning pretty much covers all there is to it. Although over a decade worth of time passes during the film, there aren’t many events happening in it and very few of them have any real tension. Although this can be seen as having a fast pace that will not let you to be bored, it also means that there isn’t much time invested in each scene to properly analyze each situation. And in a way that is both a blessing and a curse. It constantly keeps you engaged by jumping from one event to another before your emotions start to dull and you begin to think of stuff that make no sense. And it is true; most of the plot makes no bloody sense if you try to rationalize it. It is like a sappy fairy tale in a way; it pretends to be about a normal life when in reality it is as magical as it gets.

Anyways, for a story that moves fast, makes no sense, and doesn’t exactly end in a solid way, it is fine. Nothing exceptional since it doesn’t try to develop any of its themes in any particular way. It could have a lot to show regarding how to live, work, and raise a family in secrecy but just skims all that in packages of 20 minutes each and heads for drama alone. Decent for its kind but eventually weak.

CAST
All the characters are fairly simple personalities; you can describe them in two lines and have no backdrop stories. I can even say they end up being plot devises to the most part. I mean, sure, if you let your emotions to take over you will definitely love them for the simple and real way they act. They don’t have something particular to remember them for but the way they live feels natural enough to be fond of them and to even identify with if you go easy with them.

Of course if for any reason you begin to question their actions you will realize they are all idiots. But that is not what the movie was going for so it is not exactly right to expect things it never attempted to be. It’s just that if it presents itself as coming of age, it should feel as a bit more plausible. And seriously, it wasn’t. Do you know what I felt about the heroine? I felt she was Bella from Twilight.

“Lalala going to school, OMG A HANDSOME MYSTERIOUS TRANSFER STUDENT, I AM IN LOVE (20 minutes later) oh you are a monster, who cares, lets have babies (5 minutes later) oh my love got drowned, now I have to raise those kids alone IN THE WILDERNESS”

How about waiting a few years before you hump him? How about using protection? How about asking your relatives to help you? Do you even have relatives? Why are the country folk all so gentle to a stranger who lives isolated to the mountains? WHAT IS GOING ON HERE? I can go on forever with the plausibility issue.

LEGACY
Well, I am sure all the B types out there will cry like little bitches with this film. A types like me as well as veterans won’t feel much about it and will forget it soon as just another firework that pops and disappears in the night sky. It didn’t feel plausible at all to me and thus couldn’t get emotionally attached to it. I also don’t believe what many think about it; being great because it doesn’t have fan service and other otaku stereotypes in it. Hello, it has a wolf fetish and a romance that is just like Twilight (but of course still better). Plus it was very simple and rushed for the context it had. That is why I recommend the following titles as something that does far more with the whole theme of romance, coming of age, and animals hiding in human society.

SOUND SECTION: 8/10
Voice Acting 3/3 (simple but mature)
Music Themes 3/4 (not great but fitting with the feeling of the series)
Sound Effects 2/3 (ok I guess)

VALUE SECTION: 3/10
Historical Value 0/3 (none)
Rewatchability 1/3 (low because of too little plot)
Memorability 2/4 (very emotional but hardly makes use of its content to be that memorable)

Its a good story that will make you smile and cry at the right times with an occasional suspenseful moment.  For me it was missing something.  I enjoyed the characters and the story but it didn't end right for me.  The animation of the characters was so/so but the natural views were done really well.