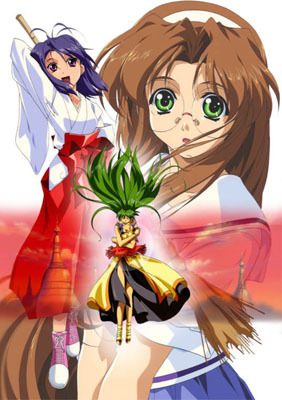 Now, this might seem like an odd recommendation, but bear with me. Yes, FY is not a dating-sim romance. But, the strange fantasy like elements in With You really makes me think that if you liked those aspects, that you'd like something like Fushigi Yuugi.. ESPECIALLY since the tone is quite girlie and based on romance as well.

If you enjoy love triangles with a strange dab of mysticism, With You and Kanon are good choices. Kanon definitely boasts "better" (but still bad, in my opinion) animation, and also is longer. In any event, you'd probably like one if you liked the other.

For a much better love triangle, with much more angst and sadness, I HIGHLY suggest checking out Kimi ga Nozomu Eien.

If you liked either of these for the romantic element (and SPECIFICALLY liked this type), then you'll like Memories Off 2nd, or With You, respectively. Beautiful animation is in both, as well as the same kind of romantic triangle.

When Morisaki Yuuta ran into a girl in the school hallway that day, he had no idea his life would change forever. As a member of the photography club and a fledgling to the world of women, Yuuto's life has been turned upside down by the entrance of not one, but several women into his life! From old friends to new acquaintances, it will be tough figuring out who to choose!

Gotta love the love triangles, right? If you do, and liked either With You or True Love Story, you'll probably enjoy the other as well due to the similarities in plot and tone.