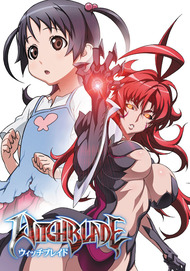 THE STAFF - Animated by studio GONZO, which automatically means it’s going to suck.- Directed by Oohashi Yoshimitsu, who has produced nothing but bullshit shows. - Based on a western comic book character by Top Cow Productions. SPECIFICS This show starts in a bit different way than the usual butt-kicking chicks with superpowers. The lead woman is actually a mother and does not turn into some tsundere that loses her mind over some indecisive lead. She is also fighting to get her daughter back from some evil organization that wants to get her superpowers. Great premise so far. What else is there? Nothing; that is all you get hereafter because this is a GONZO anime. The story is simple and sluggish, with fan service and braindead action in each episode just to fill the duration of the show with anything other than a plot. But it is much worse than that as not even the filler time (fan service and braindead action) is that good to keep you interested. Not extreme, not abundant, not with great production values. Half of it is boob gags without ever showing too much nude. As for its useful duration (the scenes with her daughter and the scheming organization) all that felt like they could fit in a nice 90 minute action / drama movie. Scattering all that in a full season show eventually watered down the importance of it. They even threw in some poorly written plot-twists in an attempt to keep you interested (the amnesia routine and her daughter not exactly being simply that) but even those are not enough to cover for the rest of the almost 90% useless duration. Going back to the idea of a movie, the whole series is like watching the first DBZ movie. You know, the one called Dead Zone? The one where the hero’s child gets kidnapped by villains, and off he goes to save it? Well as boring as that movie was in overall, it still had more dense plot and action than the whole Witchblade anime altogether. The production values are of course better and there are lots of huge boobs giggling in front of you but that is nothing but fireworks above a sewer. Plus the heroine is practically the average shonen superhero, albeit with huge boobs. And the villains are just stock material cardboards, most of which aren’t even threatening or that powerful. Yes, it was that bad. I do not recommend this anime to anyone. Just like most GONZO productions, it is nothing but fluff that has nothing interesting to offer in the long run. And now for some excused scorings. ART SECTION: 5/10 Analysis: General Artwork 1/2, Character Figures 1/2, Backgrounds 1/2, Animation 1/2, Visual Effects 1/2 SOUND SECTION: 6/10 Analysis: Voice Acting 2/3, Music Themes 2/4, Sound Effects 2/3 STORY SECTION: 4/10 Analysis: Premise 1/2, Pacing 1/2, Complexity 1/2, Plausibility 0/2, Conclusion 1/2 CHARACTER SECTION: 4/10 Analysis: Presence 1/2, Personality 1/2, Backdrop 1/2, Development 0/2, Catharsis 1/2 VALUE SECTION: 1/10 Analysis: Historical Value 0/3, Rewatchability 0/3, Memorability 1/4 ENJOYMENT SECTION: 1/10 Analysis: Art 0/1, Sound 0/2, Story 0/3, Characters 1/4 VERDICT: 3.5/10 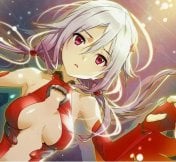 Witchblade, based on an American comic of the same name is, to summarize its premise, about some weird bracelet thing that doesnt come off, gives the wearer a lot of power, makes people attracted to that power, and slowly kills the wearer. However, interestingly enough, the story is not actually based on revealing on the sci-fi portion of the premise at all but on the characters instead, namely Aname and her daughter Rihoko. In that way, the story progress into a much more indearing type of series rather that action, ecchi, or sci-fi about a mother working to protect her daughter. While the Witchblade still plays an important role in advancing the plot with its numerous related futuristic plot elements, it is not the prime focus. The anime is pretty good and the ecchi in my opinion is well received; it has low significance but doesnt take away from the anime unless you are the type to judge stories based on things like that (which is strange but whatever floats your boat).  The openings and ending suck and the music is fairly bland. This anime is pretty shounen due to its art style but it should be interesting for everyone. 8/10 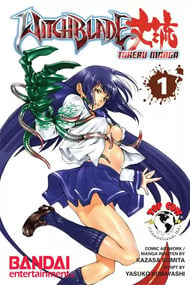