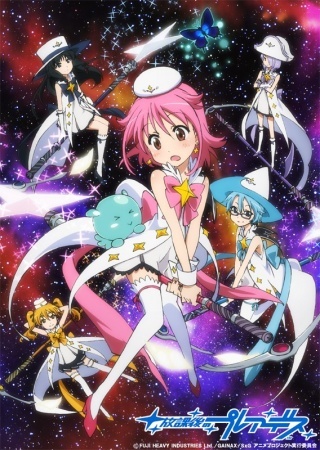 Warning, this review is significantly longer than it should've been.

I sometimes wonder about the submissions that Anime-Planet lists as anime titles. Houkago no Pleiades Movie (HnPM) can be vaguely listed as such, it's actually a manner movie. If you are like me and never heard of the term before, let's get educational for a moment:

"A manner movie is a reminder video shown in theaters before the main movie starts, it is there to remind the audience to turn off their mobile phones, avoid talking, etc." -- AniDB

So this obscure cinematographic piece is basically a 1:31 minute long infomercial. The first five seconds are devoted to product logos of Subaru and Gainax. The next eighty seconds are spent on the cast's cutouts howering around in space and discussing all things food, kawaii desu and ripping off Madoka Magica. Heck, to an untrained eye they even look like poorly drawn Madoka characters. The last eleven seconds is a still frame with more scribbles and product logos.

You might be wondering why I bothered to watch this, and even write a review on it. I do too. Anime-Planet suggested this 'anime' to me and I took the curious bait. Seeing as only ten other people have ever watched this and about thirty people have heard about HnMP, chances are high that its impact on the history of cinema will remain nil. Thanks to the obscurity of the internet this ad has expanded my dictionary greatly. Now I have something cool to brag to my friends about!