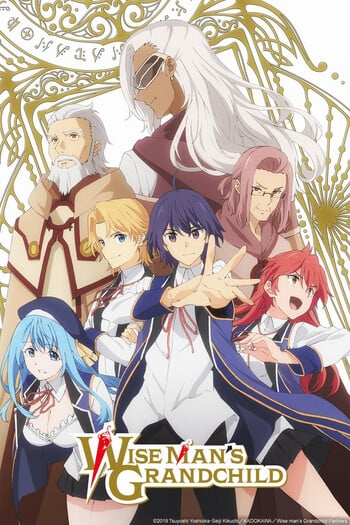 This show kinda looked good at the start but after watching the 2nd episode I kinda got bored. It is an isekai genre, that I enjoy watching, but the problem is it's cliche story and uninteresting characters. In the next points, I will go deeper to the problems.

Another boy which reincarnates into the new world and became a mage although at the start it looked somehow decent, because of the magic and practice at the beginning, but when we get a little deeper into the show it becomes flat. The main protagonist becomes the most powerful person in the universe and there isn't anyone, who would at least equaled him a little. One day some demonoids(demonized people) appear and they want to conquer the world. how else is it going be then the main hero is going to destroy them so easily, with his humdrum friends which he pitied and learned them to use a little of his magic power.

The animation is great, still, it could have been better.

Sound isn't bad at all, but it could have been better. I am also gonna mention the intro and outro there even still it's kinda irrelevant and I don't know where to exactly put it. On the first hand, the opening is bad. but on the other hand, I kinda liked the ending. That had also changed my rating on sound and animation

The main protagonist name is Shin a typical isekai hero and there is nothing special about him, then there are his friends from the magic academy who are so so uninteresting. In the group of his friends, there is a girl which almost an exact copy of aqua from "Konosuba" and the main villain look lot alike Kaname Tōsen from "Bleach". There are also some guards and townspeople which are irrelevant. His step-grandpa and step-grandma are considered the greatest magicians but in no literally time he surpassed them.

The show is bad and uninteresting I recommend to not waste time and to skip this anime to go and find a better one.

I'm not a fan of a really overpowered main protagonist so imagine a whole team of overpowered wizards, fighting low tier demons that they can crush in a blink of an eye. What about a main villain? Well... The main villain doesn't really feel like doing main villain things.

So what's actually going on in this show? A romance between the main protagonist and his blue haired girlfriend, along with about 9 episodes of magic bootcamp to make a bunch of teenagers ridiculously overpowered..

The art style was enjoyable but the story itself was extremely weak. There is a setup for a second season which does feel more promising but this already felt like a throw away adventure.

Its still early in the series but after 7 episodes, I really like the show thus far.

Similar to other issekai shows but has its own take on it that I am enjoying. He was not brought over with max level stats like Overlord or Demon Lord, he was not massively leveled instantly like Deathmarch, nor was he granted special powers like Cell Phone or Slime. He was reincarnated as a toddler and what makes him special is how he views the world and magic. He becomes OP partly because of his ingenuity, and partly because of the 3 top tier people in the country (top mage, top enchanter, and top swordsman) training him for all those years. His power feels more earned than in other shows. But here's the part I appreciate the most, his power, although overwhelming, is still attainable to others in the world through the same training. He is not a god amongst men.

Early in the series, he saves two females which felt like, oh here we go, a harem anime (which I am not opposed to), but they sidestepped it abit and he has a budding relationship with one female ws tase them rather than compete for his affection. He does gather a group of men and women to his side as it goes along but they are more of his students than ogglers.

Overall, I enjoy the show so far and I want to see more. The political angle is intriguing to me (in regards to his method of learning magic and the power imbalance it can create), the main story is nothing special but I am still enjoying it because of the characters involved, animation is pretty decent with minimal CGI so far. I recommend.

If you asked this show, what it is, it would tell you that it doesn't know

"Am I an Isekai? Only technically. Am I an SoL? For the most part. Am I a battle-shounen? I try to, but I fail miserably. Am I trying to be Konosuba? Yes, but I don't even get close."

I do not mind a show bringing different genres together. Most shows do that, anyway. But the number of genres you can squish into a show without making it a mess is limited.

First of all, this show starts off as an Isekai. Random guy gets run over and gets reborn in another world. And that is pretty much where the Isekai part ends. Throughout the show there are 2, maybe 3 instances, where it is hinted, that the MC originally is from Earth. And even in those few cases, explaining those things with the MC being the overpowered genius he is would have sufficed as an explanation. In other words: there is absolutely no reason for this being an isekai and it makes one wonder if that element was just thrown in there due to the current popularity of Isekai-Anime.

Second, the background story is all but uniteresting. Nobleman who tried to not treat commoners like trash gets his wife and unborn child killed by said commoners after they fell for a plot of other nobles who didn't like him. In turn he swore revenge. However, instead of sholwing us the details about that, we see bits of it here and there and get the background story explained in the last third of the show. What do we get to see instead? Slice of Life with MC ovvassionally oneshotting extremely dangerous demons.

"But there surely are people out there that he will have to fight and will give us interesting battles, no?"

There are exactly 2 fights in this show that had the potential to become interesting. Both of them ended prematurely with the baddies running away. You get it: the story, the whole reason most of the things in this show happen, is barely touched in the show at all. An just when you think "now it's getting interesting" you'll be let down instantly because the more intriguing parts of this show are either rushed or immediately aborted or both.

Thus, story-wise, this is 240 minutes of wasted potential.

The only positively outstanding thing about this show is the antagonist. Didn't snap for a bullshit reason or self gloryfication and even intended to stop being a baddie once he reached his goal. Well, until the last episode that is.

TL;DR: This show doesn't know what it is and this is noticeable throughout every minute of it. All the interesting parts are rushed. The characters don't develop, they and their relations change in the blink of an eye (not that there are many instances of that to begin with). No buildup, no tension, no nothing. You don't even get the chance to get excited.

This could have been an SoL with a serious undertone. The potantial was there. Had it not been as poorly executed as it was. I'm not going to hold my breath waiting for a second season.

Honestly not a bad anime, but that said it is extremely vanilla with an OP character that can rain blue fire and never loose a fight while accumulating usless side characters in which he trains to be awsome because he is the alpha muchacho. That said nothing really pops out at me except the fact that the spells look really pretty; because they are Mages in a vanilla rpg like world.