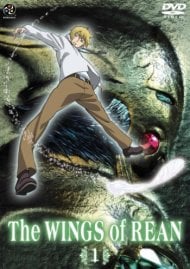 Suzuki Aesop is a half-breed Japanese, the son of an American military officer. When his radical anti-American friends get into trouble, he finds himself running from the American MPs. Suddenly, a massive battleship appears out of the sea, flying into the air, before Aesop's disbelieving eyes. The ship comes from the 'underworld' of Byston Well, and aboard it is Princess Ryukus, who carries with her the magical winged boots, the Wings of Rean; and they are meant for Aesop...

The Wings of Rean are based on a story Tomino (the Gundam guy) wrote some decades ago. That story was adapted with several alterations into the cult series Aura Battler Dunbine and remains even today as one of his best works. I have absolutely no idea why he chose to create a spin-off after all these years, especially such a rushed and poorly written one, but here it is and it sucks big time.Dunbine and Rean share a lot of common elements, such as a magical world interacting with our own and people being transported from one to another and taking part in power struggles amongst powerful noble factions that cause great calamities in both areas. The thing is, Dunbine was 41 episodes long and had twice as much time as it needed to tell its story. Rean on the other hand is only 6 and seems to be more complicated as it adds many more elements to the pot. The result is a plain mess of vaguely explained terminologies, rushed pacing, opaque character motives, and lots of ass-pulls just to end each situation as fast as possible. Even I who has watched Dunbine and had most of the weird names and terminologies in this show already explained, I still didn’t get half of what was going on. Why, who, where, and when kept flashing through my mind and I was mostly confused than entertained. Not only that, but I also had no motivation to look further for explanations, as the story itself is very generic and on top of it, badly written.The story begins with a terrorist attack in Japan. Terrorist??? Are they trying to pass some sort of political messages here? I have no idea; this whole sub-plot is there just for the lulz and heads nowhere. The lead character is a blond teenager who is mocked by his parents for not being a cool obedient soldier. Hm, something like that was used in Dunbine. Then a huge unearthly ship appears and a beautiful girl’s ass is all over his face. WTH, they turned this into an ecchi crapstorm??? Well, the girl immediately gives him these magic boots that sprout wings and for the rest of the show she is mostly glued on him. Literally. This part is supposed to be a blooming romance but again it happens in such a rushed way that I couldn’t even understand why these two fell in love in the first place. Using the deus ex machina boots, he teleports everyone to the magic world and for the next few episodes we get to see lots of weird environments, which could make fine story arcs if they were not thrown aside after half an hour of rushed exposition. As always, those two are still hugging each other like they share the same lung. They also get this fairy loli ally which tells them stuff and teleports them to other areas when the plot feels like it. Ah man, I liked it more in Dunbine where the fairies were tiny pixies. And this one is not even charming; it’s plain pedo-bait. Then we get a few episodes which are supposed to flesh out the cast and explain the plot but again everything happens in a completely rushed and vague way that you are again left with nothing but confusion. Finally, blondy uses his red heels to clap everybody back to our world once again, where an atomic bomb devastates Japan. And it’s the one from Hiroshima too. I have no idea what this is supposed to symbolize; I was too confused at that point. All I got then were these paper dolls that somehow made the villain grow old and turned him to good, so he used his butterfly wings to save the world. And then the main couple was free to be together… and then they weren’t. Hey, what the hell happened in the finale? What is going on here? What was the point of all that in the first place?In general, this is an anime that makes you hate it for being done rashly and vaguely. It has an interesting setting that you hardly get to enjoy, a cast that you hardly get to know, and a plot that you just are not allowed to understand. Pity the great production values it has; the visual effects, the machines, and the fairy world are all great to stare at. The ending song is also very sad and catchy and it would add a lot to the feeling of the story if it weren’t so damn badly presented. http://www.youtube.com/watch?v=eIGqXStJhAE&NR=1I got Fractale vibes out of this anime. It is THAT badly done. Tomino should have found someone to handle screenplay and he should remain as nothing but a writer. Other than that, just watch Dumbine or Turn-A instead of this; it is very disappointing.

Wings of Rean starts off fairly promising.  It's got all the ingredients for an interesting clash of beliefs: military vs. political, peaceful vs. warmongering, etc, and the exploration of how two worlds could meet.  Unfortunately, the story is so confusing and nonsensical, that it is fairly impossible to discern what the heck is going on.  Who're the good guys, and who're the bad guys ought to be fairly straightforward, yet the OVA can't be bothered to make the distinction.  It's hard to tell what any of the characters' motivations are and why they're there. There is almost no character development, and the little there is, is not dramatized well.  It's hard to tell who is supposed to have the change of heart, and for what purpose.  It's clear that the animators were going for an anti-military, pro-peace sort of message, but it comes off as showing the American military as being power-hungry ignorant bigots, which in this day and age, is insulting (accurate or not). The animation and sound are decent, but nothing particularily outstanding or notable, but not in an okay way.  It really could have done more, for instance, have the two worlds be colored differently, or something, but again, it's like the OVA couldn't be bothered. Overall, I would give this OVA a miss.  There's really nothing to tie the viewer to the characters, and there isn't a whole lot of action that's fun to watch (mostly because you're trying to figure out what's going on).  The characters are cardboard, and the art is blase.  Find something else to waste your time. 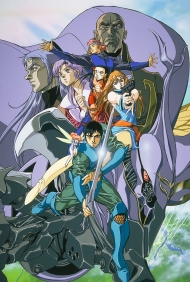 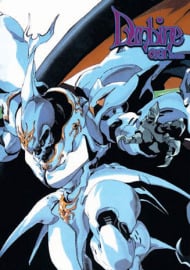 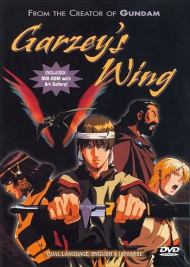 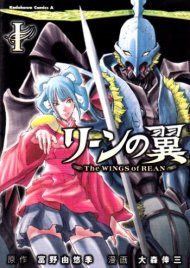