Wind: A Breath of Heart - Reviews 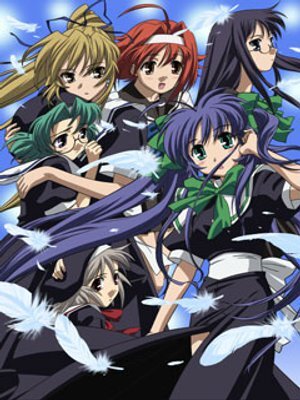 "The power of this town originates from the dreams of the Son of the Wind God, who surrounds this town."

Wind: A Breath of Heart (I'm just going to call it Wind) is an anime set in a unique town, where some of the residents have special powers (one power per person). These powers include the likes of the ability to walk on water, the ability to float in the air and even the ability to kill sound. I've just realised these powers all have something in common (with only one exception that I haven't mentioned). What is it? I'm sure you can figure it out.

I'll be honest, the start of this anime gave me the impression this would be a slice-of-life love-triangle (if not harem) anime lacking story. I was partially right, so maybe this anime is worth your time after all since the story does get serious and intense. But if I hadn't watched the whole series, 13 half-length episodes, I wouldn't be able to do this review right. Thankfully my hunch was incorrect and I was able to marathon he series in next to no time at all.

The animation isn't too amazing. In places it appears they use CGI for 3D models. In other places they create the illusion of 3D using parallax (foreground is seperate to background) and then they also use unique camera angles/shots which would seem more suited to a live TV series or movie. Considering it is a 2004 anime, they could have done better, but on the other hand they could have done a lot worse.

Sound doesn't stand out. The music suits the mood well and thats about it. The voice acting is acceptable, but then I guess no voice acting can really be exceptional can it? This anime is available in Japanese only, so you'll need English subtitles.

The main character Makoto Okano lives with his younger sister Hinata, in the town where they were born. There isn't much to say about Makoto, he isn't that special, just an ordinary guy. Of course he is nnice to others but is arguably blund to other's feelings. His father died when he was a child and similarly his mother disappeared shortly after, leaving him and his sister as orphans. Hinata's power allows her to jump very high, while Makoto has no powers.

Perhaps the most important character is Hikari Tsukishiro. I can't say much on this character without spoiling the story, proving there is a story, other than she is very mysterious and seems to know a lot about what is going on.

Minamo Narukaze is a childhood friend of Makoto and Hinata, also born in the same town. This isn't really a spoiler since its the first thing you see, but she loves (romantically) Makoto. She also has lost her mother, very similarly to the Okano siblings. Her power is wind, so she can make the wind blow. She is terrible at cooking and loves to eat octopus puffs. Her father is arguably a more important character, both him and his wife were friends of Okano's parents and he is in the town to research to town's history. Especially since both his wife and his firend died there. There is more to the character but due to spoilers it can't be revealed.

Side characters Shikoiun and Tsutomu also seem to have a romantic interest in each other. The other characters are too minor to be discussed in this review but a couple of them also have powers. It is assumed that all the characters are born in this town as it is mentioned that most of them are (so assume the rest too?).

The story is the most important part of the anime, since it seems to be lacking at the start. So understandably some people may drop this one after a few episodes before getting to the actual story. My argument is that it is very short, so just spend the 2 hours watching it. The supernatural element of the story appears to be sinister and there's even a mysterious blimp that appears in every episode. The tone of the story is serious. There is some tragedy, but it didn't make me shed any tears (that said, it's impossible for me to cry these days). Dare I use the words intense and interesting to describe the story which is backloaded and happens mostly towards the end. The start still remains relevant, but it's still no excuse for not having much story at the start however. I'd even go so far as to say there isn't much romance in this anime. SPOILER< However, episode 13 is a recap of the romance, a waste given how short this series is. >SPOILER I recommend this anime, with the special episode expansion, only because it takes just a few hours to watch the half-length episodes and the story all happens towards the end.

Family-friendliness Rating: 1/5 The worst it really gets is a token beach episode and even then the modesty remains. A thumbs up on this (lower is better)

Honestly I feel bad writing this review because I did not watch the all the episodes but this anime was painfully boring.

Story: I could not bear this show long enough to find out and most of what I did see I was fighting hard to stay interested in so I cannot give this category a real score.

Animation: Mediocre, that is all I can say about it, it's actually kind of hard to remember.

Characters: Normally I don’t mind when companies use unoriginal character types but this was taking it way too far or more like not far enough. Like so many thing with this show the characters were so common place they could have been side characters. They had just about the same amount of development as side charcaters. It would have been so easy to make these characters less boring. All they had to do is give them one orginal trait. Any singal unique characteristic besides just changing thier hair color or style. I can't really blmae them as they had a source material to follow but it does not show said source in a good light.

Overall: ZZZZZZZZZZZZZ (POP) Wha~ What happened did I miss it? Why am I Watching this again? This anime is generic to the point of mediocrity, I can't say it is bad or you should not watch it, but if you do be prepared to exhaust your stores of patience.