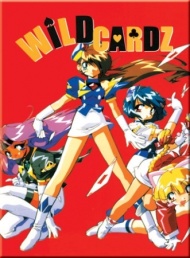 Casa Clubs, Jo Diamonds, Coco Hearts and Sunday Spades make up the Crown Knights -- a card wielding team of deadly females who make it their business to stop crime and keep harm from happening to their kingdom! The beautiful vixens' ability will be put to the ultimate test when a pair of black and white mechanical chess pieces invade the tranquillity of their home, destroying everything in their path! Can the girls defeat the oncoming behemoths before it's too late?

989 users are tracking this. Log in to see stats.

StoryStory? What story? Wild Cardz literally doesn't have one. Not only is there no background as to who the girls are, but even the idea of the current plot is extremely, if not impossibly hard to grasp. By the end of the OVA I wondered "wtf just happened?". Characters are introduced randomly and you still have no idea who they are at the end, the entire "point" of the OVA wasn't explained well and in general the story was just complete garbage. I have literally nothing good to say about the "story", hence an unprecedented score of 0.AnimationThe animation didn't suck, but it also wasn't good either. The character designs had too many black lines all over the place, making them look old style. In addition, some characters had extremely weird designs such as no nose or anything on the face at all except eyes and a small mouth, or others which just had two huge googly eyes, which reminded me of Mermaid's Forest TV monsters. Colors used were basically everything you can think of in bright versions, which clashed terribly. Special effects ranged from suckass to even more suckass, making them very missable and forgettable.SoundExtremely generic action music, with absolutely nothing special to point out.CharactersYet another rare 0 from me. Not only are none of the characters developed, but you don't even know who half of them are in the first place! It's like they took a random grab bag of action characters and every once in awhile throw a few in with some catchy lines. Meanwhile you still have no idea what's going on. No character development at all. Voice actors fit the parts, I just feel bad for them that they played these parts at all. OverallCrap, just crap. Nothing was redeeming about this series at all except average animation. No story, really awful characters, ecchi thrown in randomly to try to spice up the series (SORRY GUYS, YOU CAN'T REVIVE A DEAD PERSON), bad music, just all around awful. You guys are lucky I watch and add rare things so you don't have to. ;) As far as rewatchability, can you guess this before I say it? I'll give you a hint: it starts with "when" and ends with "an ice cube freezes in Hell". Blech. I think I need to go take a shower now to wash off the filth.

Wild Cardz? More like Wild Shitz, amirite? Haha! We (Users) here at Anime Planet like to joke around, but there is something serious that we need to talk about, and this is some serious shit. Of course, by shit I am referring to Wild Shitz. Wild Shitz is a... hodge-podge of a mish-mash of a clusterfuck of random, assorted shit and the barest sense of knowing what actual games are. I mention "Games" instead of "Cardz" because this pulls Chess pieces out of the air and NO ONE IN THE FUCKING SHOW CAN FUCKING GUESS WHAT THE FUCK A FUCKING CHESS PIECE FUCKING IS. EACH AND EVERY ONE OF THEM ARE FUCKING DUMB AS FUCKING SHIT. WHO THE FUCK CAN'T TELL THAT THE FUCKING GIANT ASS FUCKING KNIGHT IS A FUCKING KNIGHT. ITS A FUCKING HORSE. It literally took them half a fucking episode to figure that shit out, but I digress. I neglected to mention why it's chess pieces, and the reason why it's chess pieces instead of something stupid like a giant card, its because I have no bloody idea. Now, this isn't just because I don't give a shit, because I really don't, but because the villains apparently think that giant chess pieces are the best way to destroy a kingdom. They literally think like the heroines in being complete morons. BUT, it all becomes right when the reveal later on shows how, wait for it: It doesn't make sense. The reveal revealed nothing you already knew. That the fundamentals of cards, chess pieces and amusing racial stereotypes in the English dub are nothing but random ass ingredients in a cooking pot from hell. The card skills, or abilities, are... random, to put it nicely. Randomly dumb as dirt. Chess, also random. Transformations, it could be worse. Overarching plot? I've seen shit with better plot but still in the same vein of shittiness, which brings me to a needless mention/namedrop of MD Geist, a show where a guy kills the everloving fuck out of some punk ass bitches and makes the entire world look like a bitch. Not only is it better, but simplier and not as dumb. Dialogue? I'll take my leave now. Art, harmless. Apart from the Chinese guy, which I will get to now. Sound, to be frank: The dub is shit. BUT, and a big but, the Chinese guy is hilariously racist. This is like Uncle Ruckus from The Boondocks racist but only half as much, like him talking about Asians. It's like the VA tried to cram in as much Chinese stereotypes as possible while trying to make it sound as broken English as possibly can. Every time he talked I smiled and sometimes broke into laughter. It's unintentional hilarity, but far, far more enjoyable than the rest of it. Other voices range from annoying to amusingly disinterested and horrifically bored at the proceedings. Music, sure. Characters, most can die in a fire. We also get this one guy totally macking on one of the Card Chickz, the main one. He appears in an incredibly plot relevant plot point, which is to say, it has little build-up or point. Basically, jack squat. Overall: It's kind-of harmless but really shit. 80% of my enjoyment was from the racist Chinese guy and the other 20% was at the credits. Pointless, incomprehensible jigsaw puzzle that's actually made up of 5 jigsaws but with 2/3 of the pieces. Sadly, you can do worse but you can do oh so much better.

Wild Cardz / JaJa Uma! Quartet is a fantasy action anime about 4 magical girls who have to fight a randomly appearing gigantic chess piece. I say randomly here, and I really mean randomly, as in the way every character or story element is introduced randomly.  Of course, a 50-minute movie doesn't have the luxury to expand too much on every little thing, but there should at least be some basics: the start of the show made me think it was a sci fi show, so the sudden magic was a bit odd. And speaking of the magic, the way it works isn't explained either. Most fantasy series at least have some semblance of a "magic system" to explain how things work (so you at least have an idea of what scale the magic powers can reach), but Wild Cardz just glosses over that part of the plot, the way it glosses over the backstories of characters: it seems like the girls of the Quartet know some of the newly introduced characters from before, but we have no idea how they know them or why it would matter. And then these characters - who are as generic as you could possibly imagine - have to fight some big chess-piece, because the creators couldn't think of a more interesting enemy. As for the origin of this chess-piece: we get some half-assed explanation, but by that point it was too late, and too little. Animation The animation was fine, I guess, but not enough to save this OVA from scoring very poorly. Not to mention the character designs, which I really didn't like. Sound The music is generic action music, which is quite fitting for the generic magic battles. For the voice acting, there are 2 versions: the English dub is what I tried at first. I turned it off after 1 minute, because that was atrocious. The Japanese version is passable, I guess, but I felt like some of the VAs were miscast, and would have been a lot better for different characters. Some of the voices are also downright annoying. Overall If you enjoy generic magic battles without any explanation, you might have a small chance of liking this. I'd still sooner recommend searching for some AMVs or "best fight scenes" compilations than watching this, though. For the runtime it has, this story is horribly undeveloped, making it one huge waste of time. Review written for the Daily Anime Marathon Club