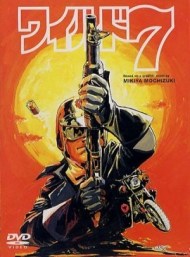 Crime is rampant, politicians controlling the government are in the pockets of large crime syndicates, and the police are as good as the crook with a gun to the back of your head. What's a good official to do to stop criminals who are the law? The answer: make an elite force with the skills to stop any criminal, anywhere, anytime. this force is the Wild 7. Each member of this elite group has an extensive felony record and isn't afraid to add onto it, even if half the city has to pay for it.

972 users are tracking this. Log in to see stats.

StoryWild 7 is a two part OVA which spans 50 minutes for each part. They are two relatively standalone stories about the Wild 7, a group of seven convicts who have been given a chance: obtain police powers and status and take out bad guys, and earn your freedom. Cyber City Oedo, anyone? At its core, Wild 7 is a show about bikes and guns, violence and explosions. Each episode deals with trying to take down a different bad guy, but you don't watch it for the plot, you watch it for the action. It's definitely action packed and exciting, but also has a somewhat campy feel to it that makes it more entertaining than other series like it out there. We really get a good taste of the show in the beginning, when all the Wild 7 gang are introduced one by one in a freeze-frame Charlie's Angels type setup. The first 20 minutes of the first OVA were very entertaining, in my opinion, but after that it unfortunately goes downhill. The action becomes more prevalent and the campy feel moves to the background, and in general, it just seems to lose its sense of fun. The tone is always quite serious the entire way through, even with the campiness in the first few episodes. Violence and blood/gore are a huge factor in the show, though not nearly as ridiculous as such series as Mad Bull. My score is based mainly on the story itself (somewhat above average) and the entertainment value which was quite high at first, yet then tapered down to boredom. With each episode being 50 minutes in length, it's hard to sit through this all at once without some sort of engaging aspect -- something that vanished after the first 20 minutes of the total 100. AnimationI can't say much about the visuals except that it's fairly typical 80s animation. The beginning part of the first episode showed great promise with the Charlie's Angels style introductions for the characters (a freeze frame with interesting stuff over the person's face), but alas, this type of thing wasn't continued throughout the rest of the episode, or the second one. Colors were very dark and moody, though the anime took place mostly during the day for once. The character designs were very 80s looking and not worth mentioning, and in general, the Wild 7 gang definitely looked like crooked cops in their uniforms, which was a good thing. The violence was an important factor, and blood and gore were plentiful in some scenes. Sometimes it was definitely a bit cheesy (such as the guy's eye being blown off... see the screenshots), but usually was very effective in keeping the tone very badass and likeable. No special effects were used, that I could tell. Though I don't necessarily enjoy older animation, I can't penalize it too harshly for looking old. It wasn't jerky or crude, though it probably could have been a touch better. SoundI tend to not like metal when it's used in anime series. Usually it's totally inappropriate or is overbearing given the subject matter. The wailing metal in Wild 7, though, was absolutely perfect for the subject matter at hand and didn't even become old after hearing it for the entire length of the two episodes. These guys are complete badasses who ride around on bikes and shoot bad guys, for god's sake... what would fit BETTER than metal? Saxaphone tunes were played as well in some cases, which also fit the sleazy and shady undertones. CharactersThe characters were definitely the weak point of Wild 7. We are introduced to the characters one by one in an interesting fashion, which made me very optimistic that they would each have their own quirks, and that we'd get to know them even a little. Unfortunately, since the bulk of the OVA is just about riding around shooting people, there wasn't much in the way of character development. We get to see a little bit of loyalty between them, but other than that, nothing exciting. The villains aren't very believable as far as how evil they are supposed to be, or at least, we don't feel angry towards them or anything. In general, you don't watch this for the characters, you watch it for the action, right? Thus, don't be surprised when the characters fall short of your expectations. OverallOverall, Wild 7 was a decent watch, but would have been much better had it kept its momentum from the first episode. It starts out very promising and unfortunately goes downhill and becomes boring and tedious to watch. There's a TV series so I'd be interested in seeing if they expanded on the idea and made it better, since I really do think this had potential as far as sheer action levels. Watch this if you enjoy ass-kicking action with a touch of violence, hands down.

Story: It's about a badass crew of ex-criminal badasses fighting for justice as vigilante cops who take no shit from nobody and solve problems with exlosions, guns, explosions and kickass music. Or the first episode was. Second is about some political intrigue or some shit. But let me praise the first half: It was clear and simple; Charles Bronson/Dirty Harry dudes going after gangsters and shit with guns and explosions and all the manly good stuff. The details don't really matter but it also boils down to bros over hos. Or bros before the blatantly corrupt judical system that's against Wild 7 for the wanton destruction they cause apprehending or killing baddieswith said destruction paid for with tax payers dollars. That first half? Totally righteous. Second half, no so much. It's political, intrigue of a political nature, more politics and the acquisition of various multi-media corporation in a long-term plan to brainwash the masses. With very little explosions. There were so many moments that could have been improved upon with explosions, and I don't just mean the entire episode. I actually do mean it, not as much violence either or baddies getting gunned down in a hale of missiles or explosions. It was frankly kinda dull. Almost fell asleep a time or two. Had a good concept with the continuation of the Biker Knights but it wasn't enough. Animation: It's 90s schlock, explosive 90s schlock. Explosions, blood, all that good shit. Until it gets to the second episode, where the animation generally lacks that explosive quality. The first half is pretty good but the second half is just alright. Sound: Fucking awesome. Tasty licks, gnarly riffs, pure sex sax, jamming and John Zorn style sax solos. This soundtrack is massively pimp, a combination of slow hard rock, jazz, metal and Jam Band. It makes even the shitty second half somewhat tolerable. The English dub is adequate, but feels like it could use more Brooklyn accents and a lot more hamboning. And there's this one Mexican-Chinese guy who sounds incredibly racist. Characters: Wild 7: Badass. Everybody else? Female, gangsters or general slap fighting wuss boys. Also some Biker 7, like that Killer7 bit with the Reverse 7 sort of thing. It's not deep on characters. Mistook some females for others and there's a loveish story that goes nowhere but you ain't here for that, you're here for the first episode explosions. Overall: First half was directed by Michael Bay and in a twist, the second was directed by M. Night Shamalayan, with the plot twist being it sucked. Only watch the first episode, and drop it. You will be so much happier and never have the disappointment of watching the second half. Having it as watched and suffering through that isn't worth it. Reviewed for DTAB 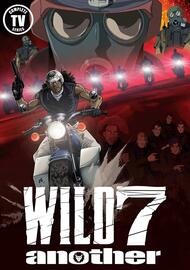 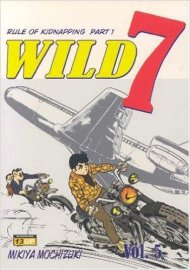