Why the Hell are You Here, Teacher!? - Reviews 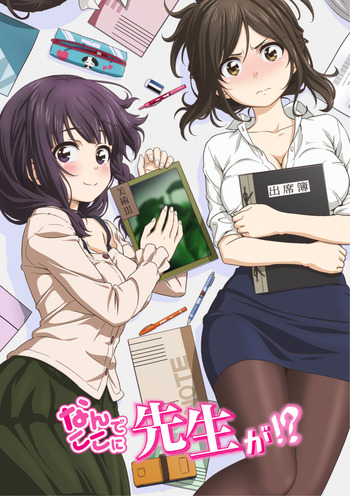 If you're into teenagers drinking their teachers breast milk then this is going to be the show for you. We also have a mother who likes to drug her friend so that her son can sleep with her, there is a magical key that can pleasure people and don't forget the boy who calls his teacher big sister. That kid is also the most notorious milkdrinker out of all of them.

I was quite impressed with the first episode but it all went down hill really fast!

This is an odd one.

It switches between sweet and innocent and almost X rated rapidly back and forth.

In what kind of world are these beautiful and sexy teachers unnattached and inexperienced?

I guess these boys are very lucky?

Overall I enjoyed it even though I rolled my eyes at the sexual scenes.

Getting past the shock value of these relationships being Teacher/Student (especially frowned upon in the west), there's some cute stories here. This anime switches from dirty to adorable faster than a ping pong travels back and forth across a table. Even though the episodes are very short, you still get just enough content and story to give you the intended character attachment. I enjoyed the wild dynamics and the risqué moments made me almost cringe for the chants test out of embarrassment. The visuals are good and effects are up to date with the industry norms. The sound was good except the absolutely drastic switch between the first teacher's serious and innocent voices. I felt that part of the voice acting was just a little too forced. Overall it's a good little series. 7/10 and I'd definitely purchase the Blu-ray for my collection.

So the entire show is split up into a few mini stories lasting for a good number of ep. The overall them is a student/teacher relationship being develop until a romantic relationship happens. Each mini story is in the same area and the people know each other. During the time there is a lot of sexual stuff that happens. For example, in the latest ep a windup toy fallen down the girl's shirt. And when the guy was trying to protect her from a truck coming by in the rain (splashing water on them) the hook of the umbrella was touching her lower area (I don't know exactly where because we only have the censor version out, but we can guess where).

There is a lot of things like this during the show.

Other than for the sexual stuff, I don't think this is really rewatchable. Like once you figure out what is going on with the show. It's obvious the student is going to hook up with the teacher. And it's obvious they are going to deny being open about how they feel until they can't.

There honestly isn't that much that happens per show. Like the latest show we seen the teacher and student bumping into each other at some fast food place, then him walking the teacher home in the rain, an incident that is talked about above, her doing a flash back to the first time the student and her ran into each other, and then her in the bath playing with the toy. Like it feels like the writers just write in any random situation that could be taken sexual (like her bottom parts rubbing against his back when he was carrying her to school). So it's like a mix of a hentai and slice of life.

This is exactly what I needed after bawling my eyes out all day after finishing Banana Fish the night before.  I laughed my ass off at this.  This is pure male fantasy, and even sensored is very NSFW and NSWPaA (not safe when parents are around).  It's not quite as hentai-ish as Redo of Healer, but it's close.