When They Cry: Higurashi - Nekogoroshi-hen - Reviews 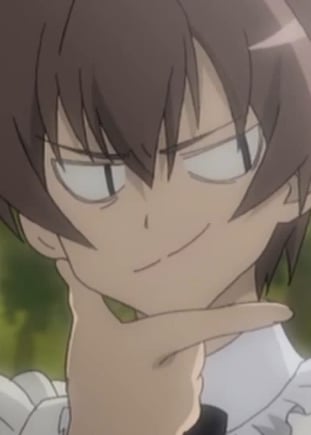 The Nekogoroshi Chapter of Higurashi no Naku Koro Ni, I'll admit, was an interesting side story to the original series, and it was offered as a special DVD for those who purchased the series in Japan.  While it doesn't necessarily lead in to any conclusive events, it gives a nice eerie story and blends a good amount of comedy into the mix, so those who liked those elements of the original series would find something to enjoy with this.  The problem is that it's limited as just a single episode OVA, so one could see it as just a one-shot story without most expansion like most OVAs tend to do.

The story has Kei, Rena, Mion, Satoko, and Rika all playing their typical antics as part of the after-school club and traveling to a mysterious site that held a series of tragic events several years before.  It doesn't have any sure shot connection to the events of the series, but I couldn't take away much from it considering the OVA had an interesting "ghost" story to tell, and the voice actors did a decent job with both the humor and the ironic thematics that entered the story about the construction site.

All in all, I believe those who liked the original series would find something to like in the OVA, but as the limitations of an OVA assert, there's no true expansion of the story to expect, so it's best to treat it as an omake story of sorts. I'd definitely recommend it to those who loved the feel of the original series and don't mind just a short chapter to enjoy for enjoyment's sake.

The animation values of the chapter are exactly like that of the original series -considering they were made along the same time, the cel production value is quite good, and the overall character design, while similar to the first season, doesn't show nearly as many inconsistencies, and perhaps that's in part for only the one-shot story.

Those who loved the music in the original series, like myself, in the OP/ED will find that the same themes are used.  "Higurashi no Naku Koro Ni" by Eiko Shimamiya is actually one of my favorite anime theme songs, and having the chance to watch the OP sequence for the first time in a while definitely struck me.  While "why or why not" was a song I didn't like as much the first go around, watching the OVA actually made me realize how it wasn't as bad of a song-some might find the "engrish" to be a bit of a deterrent, but the orchestration and overall melodic progression is worth noting. The BGM is minimal and like the original series might strike some as forgettable-for me it actually does work in its minimalism in the original series, but for the OVA it doesn't do as much to enhance it.

Voice acting I definitely liked as much as the original series, adding the needed humor and overall personality to the characters in both mood and progression.

The only reason I rate characters at this point is because there's very little to develop them, but development is  present at least  in this single shot OVA to present some of the experiences of the characters relating to the story.  Indeed they are also amusing to watch in the comedic scenes.  Kei tends to come across as a a bit of  pervert, and Rena's typical "wanna take them all home" sent me in a fit of giggles.

I wouldn't say expect a lot of relatable quality with the characters here, but if you treat it like me and watch it simply for enjoyment's sake, it's a lot of fun.

Overall, i think that the Higurashi special was decent, but perhaps not more than a simple side story to the series.  Recommended to those who enjoyed both Higurashi installments, though I'd watch this before moving on to Higu Kai, as it relates more in the mood of the previous series than the latter. I dd quite enjoy it for what it was worth.

Story:  This special episode of Higurashi doesn't really have all that much for anyone- its not full of gore or deep philosophiocal, engaging storylines for the typical Higurashi fan and its not full of ecchi for all us perverted otaku's who like to see Mion's breasts bouce around and see Rika say her trademark ''Nipaaaaaah!~'' in a cat suit. Its a bit....pointless is the only word I can think of.

Admittedly, the first 10 minutes of this the perverts may like, all the usual suspects of Higurashi lose a card game and end up having to dress up in embarassing and sexualised costumes- but the ecchi wasn't very strong or graphic. It almost wasn't there- the outfits weren't much to shout about, except maybe Mions fur bikini. All the other characters looked relatively normal, except for Keiichi but I don't think many people want him to be all ecchi-fied.

The remaining 10 minutes of this story is purely conversation, in which Mion and Rika tell Keiichi a story about a pit in which people died. I was expecting the crew to go to this pit hole and end up dying there in a brutal way, but they didn't- they just talked about it till the end of the episode, which wasn't particularly interesting.

Animation: Typical Higurashi, the animation was fairly good, but nothing outstanding.

Sound:  Sound in Higurashi is always excellent, this special was no exception. Full of creepy songs, the music creeps the viewer out and creates an eerie atmosphere.

Characters: No character development in this, excapt maybe a little bit of a story about Mion's childhood.

Overall: This is ok if you want a little extra Higurashi to watch and don't really care what its about. But otherwise, its not really anything worth watching.