When Marnie Was There - Recommendations 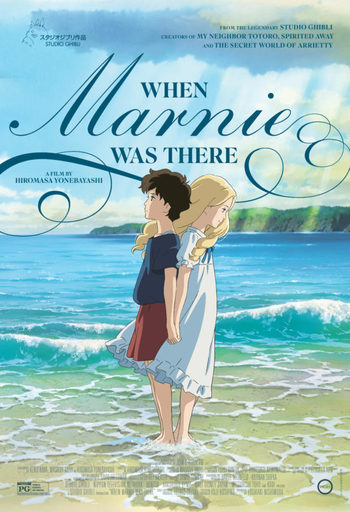 Hai Bus no Naka no Yume

Yoshiharu lost her only skill, the ability to play the piano, because of stress caused from the immense pressure her parents put on her. In her despair, she tries to jump off a rooftop. Suddenly, a ghost appears and introduces herself as Yume. Yume invites Yoshiharu to her "secret base", an abandoned bus. Yoshiharu decides to throw away the piano, her parents, everything, and follows Yume to her secret base. There, she comes to face Yume's past.

Both of these series include a girl who is suffering mentally that encounters a 'ghost'. However, in Hai Bus no Naka no Yume, there is actual romantic tension between the girls, unlike in 'When Marnie was there. Overall, I think both of them are really good.

Minato Mahiko, who graduated from college without a job offer, ends up living and working at the public bathhouse "Toki no Yu" after a series of coincidental events. As he interacts with the regular visitors and creates bonds with those around him, his life slowly but surely changes in more ways than one.

Kou moves back to his old village where he lived as a child. After a tragic event in that same village he developed a fear of fire, but then he meets with a boy calling himself the "Sorcerer's Apprentice" who's able to create beautiful fireworks. Now, they both set out to become pyrotechnics.

When 10-year-old Wataru's father leaves home and his mother is taken ill to hospital, he decides to change his fate by travelling through the magical door shown to him by his friend Mitsuru. In a land of magic and monsters, Wataru must summon all of his courage and embark on a journey to meet the Goddess of Destiny and change this "mistaken fate."

Follows Anne from the age of 16 to 18, during the two years that she teaches at Avonlea school. Anne discovers the delights and troubles of being a teacher, takes part in the raising of the twins Davy and Dora and organizes the A.V.I.S. (Avonlea Village Improvement Society), which tries to bring improvements to Avonlea with questionable results.

Miss Marilla Cuthbert and Mr. Matthew Cuthbert, middle-aged siblings who live together at Green Gables, a farm in Avonlea, on Prince Edward Island, decide to adopt an orphan boy from the asylum as a helper on their farm. Through a series of mishaps, what ends up under their roof is a precocious girl of eleven named Anne Shirley. Anne is bright and quick, eager to please but dissatisfied with her name, her pale countenance dotted with freckles, and with her long braids of red hair. Being a child of imagination, however, Anne takes much joy in life, and adapts quickly, thriving in the environment of Prince Edward Island.