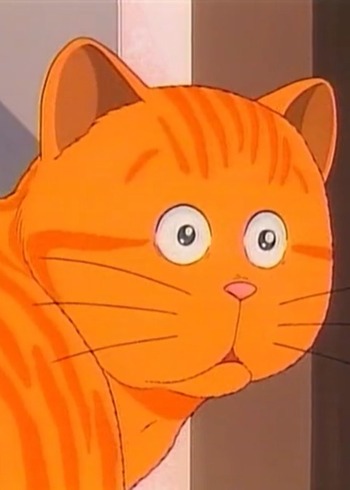 Like the 1985 What’s Michael this is more like a collection of OVA’s or shorts put together for a single runtime of 44mins not a continuous story/plot.

Once again Michael has a range of human companions from young and single to elderly and married. It’s really unclear if he’s been passed around or if the animators intentionally drew him in different homes with different owners.

References to the previous shorts make an appearance but aren’t the main focus of any of the shorts.

Breakdown of shorts, each one’s again about 4 mins.

The Fugitive: a man on the run [Richard Kimble]  has an encounter with Michael.

Dancing Michael: People interested in Michael try and get him to dance

The Fugitive: Richard Kimble returns for more time with Michael.

The Typhoon’s Gift: Kitten Michael and companion get taken in by a guy in poverty.

Michael Bets on the White Ball: Sports time people, baseball, ‘cause why not?

“Gently, call my name” - Sweet music video about Michael and companion sends viewers off with a smile.

Overall this wasn’t much better than the 1985 anime but it wasn’t any worse either. Animation’s a touch up, music’s on par, there's a bit more story to it [Fugitive x3], and the ending credit sequence was much more appealing. Gone is the rip-off *cough* homage *cough* of Nintendo.

For those that are more into episodic anime but enjoy some continuations this might be more your style than the 1985 one.