Welcome to THE SPACE SHOW 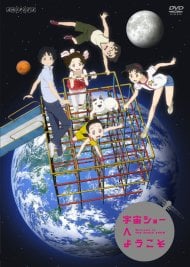 When Noriko, Amane and their friends left for a week-long summer camp experience in the countryside, they had no idea that they were about to embark on a galactic adventure! After helping a wounded, dog-like alien, the creature offers to take them to a spaceport on the moon where fantastical beings, flashy sights and new friends await them. Together, the gang will travel between worlds, dodge nefarious poachers and even encounter the most famous television show in the galaxy, as they embark on the best summer vacation of their lives!

This isn't a great movie by any means, but the creature and world design kind of make it worth a watch. You're basically presented with a kids-taken-to-another-world storyline, with a villain thrown in whose motivation makes little to no sense, if it's ever really explained at all. It all winds up feeling like you've been dropped into a lush setting mid-worldbuilding, but while you're given glimpses into what seem like really interesting concepts, nothing is fleshed out. You'll be left wondering if you just watched an OVA for a series that doesn't exist. I guess that's the issue with your protagonists being pretty average children, all the experiences of these profoundly incredible worlds are sort of shallow. Even Pochi, the alien super-dog professor taking them on this adventure could have used more depth. The little slice of his home life you get to see isn't nearly enough. What even IS his relationship with the antagonists? PLUS, WTF is with his weird flirtation with the literal youngest kid in the group?? At first I tried to write it off as familial, paternal, but then their parting at the end of the movie leaves you with a ...eugh... feeling. Pedo Pochi isn't a good nickname. It's a bummer. This could have been a truly great movie.