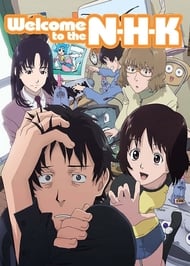 StoryNote: Nope, haven’t read the manga yet. Almost nothing is better than watching a show that exceeds all of your expectations. I jumped into this series expecting a polished rehash of the same old theme that almost all ecchi shows have: namely, one (or more!) cute girls inexplicably falling for an insultingly spineless Keitarou-clone loser. However, this GONZO work is not, by any stretch of the imagination, your average nerd-meets-girl. On the contrary, Welcome to the NHK! is a remarkably strange series – one that happens to be among the best of the year. What makes the series so excellent is that it manages to work well on not one, or two, but three levels. The first level is the one most people will enjoy the show for: namely, a witty romantic comedy involving quirky characters in unusual situations. Most of the laughs in the show come from the protagonist, Satou, a loveably dysfunctional shut-in whose tendency to fall headfirst into social problems is tempered only by his relentless paranoia. Most of his personality is developed through internal monologues, which, as with Kyon from The Melancholy of Suzumiya Haruhi, quickly flesh him out into a likeable, albeit bizarre, protagonist. Coupled with some equally strange but equally appealing supporting characters, Satou leaps from one anti-social obsession to another in rapid-fire succession. The bizarre situations Satou finds himself in, coupled with his strange personality, make for plenty of laughs and give the show a good deal of charm. The second level is less immediately appealing, but is nonetheless fascinating. Alongside the comedy, NHK provides insightful commentary on Japans many societal problems. By unwittingly finding himself in the middle of some of Japan’s most dysfunctional circles, Satou acts almost as a medium through which the audience can see usually distant and abstracted problems up close in frightening detail. From the internet suicide chat-rooms to the NEET shut-ins, the anime gives faces, motives and reasons to these important and alarming statistics. In the end, in addressing real-life problems in Japan, this is probably the most honest and believable anime out there. Finally, there is a third level that surfaces most near the end. Put simply, NHK is in part a desperate search for meaning in a vast and lonely world. One of Satou’s most telling lines is, "I am alone in the universe." His inability to relate with society almost forces him to be what he is – a lonely, emotionally neutered husk of a human being. This theme carries over to the supporting characters as well; each troubled soul searches endlessly for some hope, some iota of meaning, and always comes up short due to his or her own insecurities and idiosyncrasies. While this anime could have been good with just the first two “levels” of entertainment, the third level is really what makes the show. There is an underlying sense of poignancy running through the entire work; even as I laughed at Satou’s numerous shortcomings, the sad truth is that I saw a lot of myself in his exaggerated character. As individuals who necessarily live at least somewhat on the fringe of society, I suspect other anime watchers will have similar thoughts.AnimationI was a little apprehensive to see GONZO helming this series. However, unlike other anime by the studio, GONZO doesn’t allow over-p=roduced animation to interfere with the show. While at times the show is quite visually innovative (particularly when Satou is in the throes of some wild personal fantasy), for the most part the studio plays it straight. The result is a visual look that seldom wows, but provides a solid backbone for the story to rest on.SoundThe sound, on the other hand, is great. An impressive array of seiyuu performances is led by Koizumi Yutaka, whose fevered and thoroughly erratic rendition of Satou borders on transcendent. For music, I particularly enjoyed “Purupuru Pururin,” a deliberately inane JPop song that pokes fun at the musical taste of anime-watchers. The rest of the soundtrack is suitably zany, with a solid OP by Round Table and a hilarious ED.CharactersAs mentioned in the story section, Satou really steals the show here as the loveable anti-hero. The other characters usually just act as foils to him, but are generally interesting in their own right as well.OverallAs a whole, NHK ni Youkoso! is a landmark achievement for the year. Besides the fact that some people may find the transition from comedy to drama awkward, I’d recommend this to just about everyone. No other anime this year has appealed to me in so many different ways.

Story: 9/10 What do a delusional recluse, an obsessive otaku, and a misfit missionary have in common?  Utter insanity would be the right phrase to describe the crazy-fest that is Welcome to the NHK!.  A black comedy set in modern day Tokyo, Welcome to the NHK! follows the not-so-normal lives of four young adults as they struggle to find meaning in an often unforgiving world. Sato Tatsuhiro, a lazy and neurotic shut-in, is an unemployed hikkikomori who sleeps 16 hours a day and isolates himself from the human race.  Welcome to the NHK! is all about Sato’s exploits, obsessions, and ruminations as he finds himself caught in the dark bowels of Japanese society.  Hold on—why would an anime that revolves around the everyday life of a creepy, socially inept hermit make an interesting story?  Well, why not? What makes the story of Welcome to the NHK! so appealing is the fact that it achieves a sense of realism that is often blurred in other anime.  As one begins to sympathize with the human dilemmas these characters must face, it becomes easy to relate to the ups and downs of Sato’s progression.  This emotional roller coaster is split into multiple arcs that drive along with such perfect pacing; you will cry (more like I cried). With each new obsession Sato finds himself trapped in a pyramid scheme, lured into the realm of otaku fetishes, and addicted to a fantastical MMORPG all whilst desperately trying to escape his hikkikomori ways.  Through Sato’s journey, Welcome to the NHK! explores weighty themes of death, delusion, and suicide—but doesn’t toss them out of nowhere like a sappy melodrama.  Rather these themes are insinuated through dark, satirical humor that poke fun at the absurdity of modern day Japan.  For example, when Sato reenacts a heroic snowball fight, Yamazaki states, “a drama has a progressive plot, an emotional climax, and a resolution…but our lives aren’t like that”. Indeed, as in reality, there is no “end” to this story, but merely a continuation of the human struggle through life’s hardships and anxieties.  Rather than progressing linearly, the plot builds upon layers of character revelations and emotions to create a cohesive whole.  All the themes explored within each story arc converge in a finale that brings Sato full circle. Despite this, the only gripe I have about the ending was the fact that Sato still relied on the crutch of blaming the NHK “conspiracy” for every setback that occurred.  The show took a “glass half empty” approach while the conspiracy motif functioned as a scapegoat for the characters to scorn the world rather than a reason to look inward.  Perhaps Sato realizes that the NHK conspiracy is another delusion in his head, and perhaps the very idea that the world is NOT out to get us is the truly fearful thought. Animation: 8/10 Although it may lack consistently gorgeous animation, Welcome to the NHK! boasts visuals that suit the style of the anime very well.  Character designs are clean, and the bright color palette lies in stark contrast to the dark underbelly of the show’s intent.  Not to say there aren’t any gloomy scenes—indeed, some of the show’s most hellish moments take place in Sato’s trash-infested apartment.  Oftentimes the innocent, brightly-colored art transforms into the bizarre as Sato ventures into the psychotic recesses of his mind.  From Freudian dream sequences to outrageous outbursts of the psyche, the slipshod animation emphasizes Sato’s instability and fluctuating emotions.  All in all, the animation style complements the changing physical and psychological state of its characters, yet paints a realistic portrayal of modern day Japan. Sound: 10/10 Voice acting is top-notch, and both the Japanese and English dub are quality work.  But the soundtrack is truly the most breathtaking, lighthearted, emotional insanity I have ever heard.  Every sweeping ballad, melancholic harmonica solo, and bubbly pop song flawlessly matches the atmosphere of every scene in Welcome to the NHK!.  Even when the music doesn’t match the tone, the contrast ties perfectly into the sarcastic wit of the series.  For example, the opening credits bombard us with an upbeat J-pop extravaganza—a fitting title song for a depressed and delusional hikkikomori.  Pearl Kyoudai composed an eclectic mix of poppy rock, seedy blues, and heavy metal to represent the emotional spikes and lulls of Sato’s deranged psyche.  By all means, buy the soundtrack, download it…it is amazing. Characters: 9/10 The slightly twisted cast of characters in Welcome to the NHK! is truly what makes this anime shine.  No matter who you are, there will be at least one dysfunctional character you will be able to sympathize with.  Sato is an intriguing character study on his own, but his progression (and regression) is triggered by the influence of the supporting cast.  That includes the moe-obsessed otaku Yamazaki, a college freshman set on designing a gal game, Hitomi, a paranoid drug addict full of conspiracy theories, and Misaki, the innocent “do-gooder” set on saving Sato from his hikkikomori ways.  Although psychologically disturbed, these social outcasts succeed in pulling my heartstrings in the most charming fashion.  It is not out of pity that I empathize with them, but because they are extremely relatable there is no choice but to root for them—hoping that they find some affirmation, some shred of light to catch that elusive “happiness”. Overall: 9/10 Welcome to the NHK! is an entertaining, yet engaging journey into the both the positive and negative aspects of the human psyche.  Moreover, it takes a humorous and sarcastic look at the “bottom-dwellers” of Japanese society.  In the end, Welcome to the NHK! simply follows the lives of people caught in a vicious cycle; one must define their own happiness in order to escape the cycle.  If you want a hilarious, yet touching story with memorable characters, look no further! 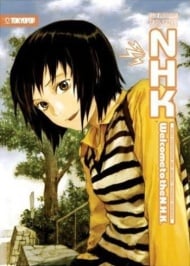 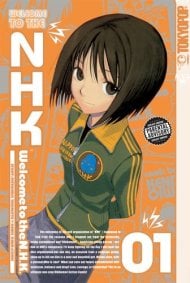 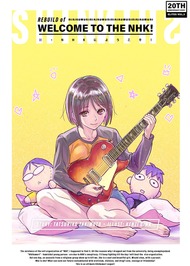 Rebuild of Welcome to the NHK! (Light Novel)