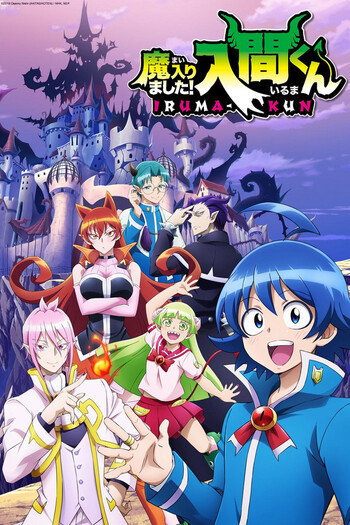 Note: I'm updating my opinion about this show since it has gotten a good bit better. It is currently EP 19. I still think this show is for people who like kid/teen comedy. I still think if it aired next to shows like Spongebob, it would take off. However, the story has somewhat gotten better.

While the show still has 1 off events that doesn't really progress the overall story. These are happening less and less, and an actual story is being made. Depending how things go in the future. It is possible this could become a must watch. But because it appears it is hanging around the 1 off, not progressing for the most part, and spongebob comedy outside of major points in the story. I can't give it anything better than a 6 out of 10.

It should be noted the overall story is someone can't say no if someone says please. The parents are scumbags and use this. They sell their son to some deamon that just wants a grandson. He plays the role, but high school comedy happens. Because he is who he is, he becomes OP, and it's pretty obvious what is going to happen next in most situations.

(This is what I thought of the show before the second half of this arc. I gave it a 4 out of 10)

Who is this show for? This show is for people who are looking for kid like comedy.

The show itself isn't horrible, but it isn't something I would really go out of my way to see. I honestly don't think I will remember this one when it is over, but I might watch another season if offered.

As far as the overall feel, the show is less about story or the people. But it's just about "fun". It feels like a normal kids show with the anime quality mixed in. I mean if you take away the big breast and odd clothes. This feels like it would fit next to other shows like Spongebob. In fact, IMO it could've made a lot of money over here in the USA if they did somehow get it to air next to shows like Spongebob.

When I first saw the description of this anime (and that it was a comedy), I immediately said:  "Oh, great...another isekai comedy anime."

After some other anime these past couple seasons started to go downhill, I finally gave up and clicked on this out of sheer boredom.

To my surprise, I not only enjoyed it but looked forward to watching it every week; I even went and read the manga (yes, even going so far as to attempt to read the raw Japanese version since only about 84 chapters are translated as of this time) once the anime ended.

If someone took Hayate the Combat Butler, took away his odd strength and stamina and then instead gave him an uncanny ability to dodge dangerous things due to a background of constantly being around danger...then threw him into the demon world, you'd get something similar to Iruma-kun.

When Iruma's deadbeat parents sell his soul to a demon after making his life a living hell in the first place, he finds himself in a very odd situation of being that demon's...grandson?  And now has to attend demon school in the demon world?

Surrounded by demons which would eat him if they ever found out he's human, Iruma can't say "no" to his new grandfather due to his upbringing, and tries to lay low at school.

I was pleasantly surprised at the plot.  For an anime which is mostly comedy (with isekai elements), I expected nothing of interest to happen, but not only was it fun to follow Iruma's journey, there was actually even a small plot arc in the later part of the series and some smaller ones between that.

That said, the story is nothing really new and the plot is, while amusing, predictable.  But let's face it...you're not going to come to a comedy anime for a mind-boggling plot.  7/10

Iruma is a doormat.

There's no other way to put it; he's a doormat.  This is a point of comedy for a good portion of the series, but the best part about it is that he actually starts to grow as a character.

Iruma's doormat-like personality might be off-putting to some people, but his inability to say "no" to people who request things of him wind up creating some interesting scenarios and has him meeting a lot of demons.

Some of the other characters even change a little around him as well (just wait until you see what becomes of the strictest, scariest teacher, Kalego, when Iruma gets involved).

The most prestigeous student who at first appears to be an uppity, rich snob shows us a loyal and rather amusing side to him...and a silly girl with an overactive imagination finds acceptance for the first time with Iruma, who has just as much experience with "friendship" as the demons do.

Even thought to be untouchable characters, like the student council leader Amelie, show a different side of themselves when Iruma is involved...and there aren't really many who dislike Iruma or even get jealous of him.

Meanwhile, the "Abnormal Class" or "Misfit Class" is made up of just the right amount of weirdos who add to the humor.

Perhaps Iruma has a strange power even though he can't use magic, being the only human in the demon world...nah.

The characters are fun, colorful, and I found myself looking forward to appearances by the likes of Kalego.  A gripe would be that not many of them actually personally grow; Iruma does the most growing, but honestly it's amazing that there's any sort of character growth in a comedy isekai.

The lack of focus on "boobs and butts" (okay, yea...Amelie has ample assets for those interested) was a nice change of pace.  8/10

No complaints with the sound...well, okay, the ending song is probably the most grating and annoying thing I've ever had the displeasure of listening to in quite a while.

The opening song is fast paced and happy, but the images don't quite match as someone's impression of the anime from it would be that it's like My Hero Academia or another "school-fighting" anime.

It's not; there aren't really any big fights.  Or any.

Voice acting is fine (Jap), and the first opening song is hyper.  However, the ending song is grating and the opening song does not really match what type of anime it is.  8/10

As for the animation, there aren't really many bad parts with it.  It's fast-paced where it needs to be, and the colors and movements bring out the hilarity of the situations (especially after I went back and read the chapters of the manga which the anime covered).

That said, we come back to the problem of the opening song.  I have no problem with the song itself, and the opening also fast-paced and works in the favor of the anime, but can give the wrong impression of what the show is about.  It's certainly cool and fun; don't get me wrong on that...and actually is animated well despite giving the wrong impression.

The animation is consistent throughout the series, and brings out the situations.  Even the way Valac is animated points to the favor of the animation studio, though the major downfall is the opening sequence in relation to what the anime is actually about.  9/10

I rather enjoyed this, and even went back and re-watched various episodes and arcs which I really enjoyed.

It's rather difficult to find good isekai anime these days, especially ones which aren't filled with cringe-worthy fanservice, harems, or slapstick love comedy.

While there is a little bit of that in this anime because it's not a demon anime without a succubus or two (or a succubus teacher who teaches the art of seduction), it doesn't keep repeating itself or trying to force that sort of humor on the viewers.

And while Amelie does start to possibly develop feelings for Iruma, it's hardly the focus of the anime.  There's no slapstick romance as the anime is really just focused on Iruma and how he acts and reacts to what is happening around him; how his mere presence is enough to make waves in the demon world (without them even knowing he's human), and even a little on his own struggles of self-worth and wha the wants to do in the future.

What's his ambition?  His goal?

This is brought up and focused on, and for a comedy, it does still have its serious moments and epiphanies.

It has times when Iruma is confused and tries to figure out what he wants to do and who he wants to be.  They aren't focused on for too long before something else pops up, but the anime balances comedy with character-driven aspects (as much of the plots are character-driven) very well.

The re-watchability is a big plus in the anime's favor as well; even some anime I've rated fairly high don't appeal much to me to watch for a second time.  This one, however, is a lot of fun and even had me empathizing with parts of Iruma's personality (one doormat to another, I suppose  XD ).

Certainly, people who like Iruma's character and-or can empathize/sympathize with him will probably get more out of this anime than people who dislike Iruma.  Since Iruma is my favorite character (next to Kalego and the Chairman), my rating is certainly colored/opinionated towards that.

The anime is a rare gem in the surge of isekai anime which have come out lately, and is fun to watch more than once.  9/10

This is my favorite show!

There are fair few janky elements-- for instance, they don't draw nearly enough glitter on Azu-kun, which I can only assume is the result of budget cuts.

The plot structure is... bizarre. It's mainly episodic, but with a few multi-episode plots scattered in, and one arc that takes up a quarter of the show.

Regardless, this anime has an insane amount of good vibes-- all the characters are adorable and brightly colored, the reactions are hilarious, and insane things happen without undermining the emotional core of the show. Plus everyone loves Iruma, so you will feel loved watching it.

In all honesty the plot isn't extremley deep but it is a show I would be willing to watch with my family and not feel embarrassed. If you like funny, some-what action anime this is the one for you. I definitely think they did the whole isekai thing pretty great and wasn't cliche or boring. I definitely didn't go an episode without laughing or chuckling.

You guys have to read this manga and watch the anime! It's so much fun! The characters are all hilarious and lovable, and the plot is a perfect mix of comedy and heart. I really loved reading this manga - the diverse cast of characters each have such unique and funny personalities that make them super endearing. There was one main character that I found a bit annoying, but overall I really enjoyed it. If you're into comedy, romance, and captivating plots, then you should definitely give this one a try. Just a heads up, the anime is a little more childish than the manga, but either way it is still very funny and one of my favorites.