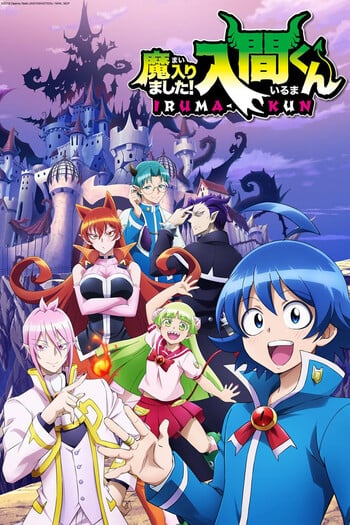 If you're looking for anime similar to Welcome to Demon School, Iruma-kun, you might like these titles.

More than less the same concept. I think Welcome to Demon doesn't have nudity, while the other does.

I only hope Iruma doesn't screw up the adaptation to anime as badly as Rosario did.  Yes, both are about monster schools in a different plain of existence hidden from humans of our world with a new 'human' student who ends up gaining accolades and attention despite being only weak humans.  Both characters not only run into trouble but do so early on and establishing a footing at their schools because of it.

Literally the same anime but Rosario + vampire have a lot of fan service! The story is the same the protagonist goes to the under world and they go to a demon school

(Sorry for my bad English)

Believe it or not but the anime art style to Soul Eater and Izumi are very similar.  Both go to schools in different dimensions surrounded by monsters and magic.

Both are school and competition focused, as well as having many colorful strange characters.

Welcome to Demon School, Iruma-kun is more childlike, where Soul Eater can be unsettling.

Both have bright weird characters, goofy humor, and involve the Demon King.

Welcome to Demon School, Iruma-kun is more school focused, and The Devil is a Part-Timer! is more workplace related.

Both animes have this kind of (sometimes) weird humor, with the main character not belonging to the world they are forced to live in.

Izuku has dreamt of being a hero all his life—a lofty goal for anyone, but especially challenging for a kid with no superpowers. That’s right, in a world where eighty percent of the population has some kind of super-powered “quirk,” Izuku was unlucky enough to be born completely normal. But that’s not going to stop him from enrolling in one of the world’s most prestigious hero academies. Now, the only thing standing between him and his first class is the academy’s formidable entrance exam—nothing a little private tutoring from the world’s mightiest hero can’t solve.

(Disclaimer: please be aware that I am writing this review after only 3 episodes of Welcome to Demon School! Iruma-kun have aired, take my opinions with a grain of salt)

To Love Ru and Welcome to Demon School! Iruma-kun might seem like different sorts of shows to begin with (To Love Ru goes pretty hard on the ecchi), but the more I watch Iruma-kun, the more I am reminded of To Love Ru.

First off, the characters: Rito and Iruma are far from clones of each other, but they definitely share similarities in that they are both very friendly and accepting people, often to their own dismay, and both series deal with the main characters undergoing a dramatic lifestyle change and being burdened with unwanted responsibilities. Clara in Iruma-kun also reminds me of Lala in To Love Ru, they're both very dappy and excitable female leads, though (as yet) Iruma-kun doesn't seem to be heading in the rom-com direction at all.

Besides the characters themselves, the general tone of both shows is quite similar: they both present a very light-hearted take on what on first description might sound a bit darker, comedy is one of the primary focuses of each series, and both have quite a 'comfy', slice-of-life feel to them.

In short, I think I would recommend Iruma-kun to any fan of To Love Ru and vice versa, though I would advise people who hate ecchi to be aware of that going in to To Love Ru. Also note that the similarities I'm describing primarily apply to the first (and somewhat second) seasons + the first batch of OVAs of To Love Ru only, the series changes tone a bit in the 'Darkness' sequels and loses the same eclectic comfy feeling I referred to earlier.

Hayate and Iruma have near mirror backdrops with each having shitty useless parents more interested in burning money than family and both running into debts and having to work to pay them off then going to unique schools and living in mansions.

Main characters are very similar in appearance and in same age range. Both shows have friends working together to compete and excel.

Both have bright interesting characters and are focused on magic schools where the protaganist has little or no magic.

Majima Jin hates animals, and yet he finds himself at Seton Academy, a school full of animal students! Can he learn to get along with his classmates?

Both series feature the male human protagonist being thrusted into an unorthodox school with mainly non-human students. Both Jin (Seton Academy) and Iruma need to quickly adapt to their unusual environment (animals for the animal-hating Jin, and human-eating demons for the human Iruma), all while forming unlikely friendships with a bunch of wacky but lovable classmates.