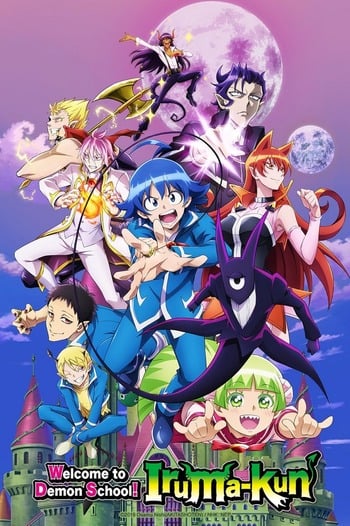 If you're looking for manga similar to Welcome to Demon School, Iruma-kun 2, you might like these titles.

In a far place in a far country there’s a mansion where a demon girl lives. One day there was a huge storm outside, so in order to protect himself a mysterious boy named Adam enters the mansion. And so they meet... the little demon girl and the mysterious boy that looks like a shinigami, both outcasts in the human world; they decide to create a school for monsters together!

In the Netherworld school known as the Evil Academy, students learn to be proper demons! Truancy, poor hygiene, and unfinished homework are what's needed to make the honor role at this evil alma mater. But there is one diminutive demon not content with being the most sinful kid in school... The mischievous Mao has his sights set on superseding his own father, and becoming the new overlord of the Netherworld!

Sang is a fearlessly spunky young girl in search of the Demon School Hades. Fortunately for her, she comes across a group of misfit monsters that are ditching class from the Demon school. She convinces them to sneak her into the class that normally only allows monsters to attend. Mystery, intrigue and high jinks unfold as Sang finds a way to become a monster--and begins a fantastic adventure in a devilish domain!