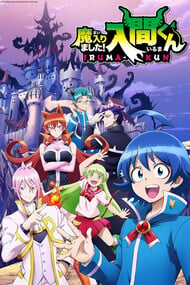 Suzuki Iruma, human, 14, one day finds himself taken against his will into the world of demons. To add to his predicament, his doting owner and self-appointed "Grandpa" is the chair-demon at his new school. In order to survive, Iruma must deal with a haughty student who challenges him to a duel, a girl with adjustment issues, and so many more scary beings! Can this ultimate pacifist dodge the slings and arrows that are flung his way? As he struggles frantically, Iruma's innate kindness begins to win over enemies.

Note: I'm updating my opinion about this show since it has gotten a good bit better. It is currently EP 19. I still think this show is for people who like kid/teen comedy. I still think if it aired next to shows like Spongebob, it would take off. However, the story has somewhat gotten better. While the show still has 1 off events that doesn't really progress the overall story. These are happening less and less, and an actual story is being made. Depending how things go in the future. It is possible this could become a must watch. But because it appears it is hanging around the 1 off, not progressing for the most part, and spongebob comedy outside of major points in the story. I can't give it anything better than a 6 out of 10. It should be noted the overall story is someone can't say no if someone says please. The parents are scumbags and use this. They sell their son to some deamon that just wants a grandson. He plays the role, but high school comedy happens. Because he is who he is, he becomes OP, and it's pretty obvious what is going to happen next in most situations.  (This is what I thought of the show before the second half of this arc. I gave it a 4 out of 10) Who is this show for? This show is for people who are looking for kid like comedy. The show itself isn't horrible, but it isn't something I would really go out of my way to see. I honestly don't think I will remember this one when it is over, but I might watch another season if offered. As far as the overall feel, the show is less about story or the people. But it's just about "fun". It feels like a normal kids show with the anime quality mixed in. I mean if you take away the big breast and odd clothes. This feels like it would fit next to other shows like Spongebob. In fact, IMO it could've made a lot of money over here in the USA if they did somehow get it to air next to shows like Spongebob.

This is my favorite show!There are fair few janky elements-- for instance, they don't draw nearly enough glitter on Azu-kun, which I can only assume is the result of budget cuts. The plot structure is... bizarre. It's mainly episodic, but with a few multi-episode plots scattered in, and one arc that takes up a quarter of the show. Regardless, this anime has an insane amount of good vibes-- all the characters are adorable and brightly colored, the reactions are hilarious, and insane things happen without undermining the emotional core of the show. Plus everyone loves Iruma, so you will feel loved watching it. 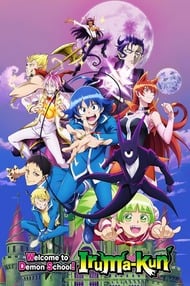 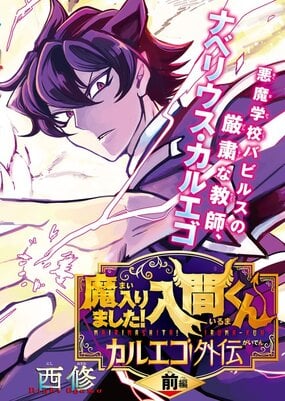