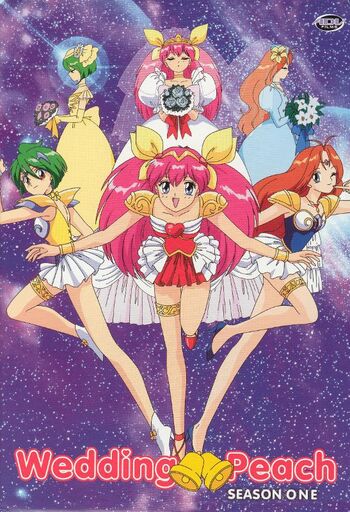 I will punish you in the name of the … wedding?

This Sailor Moon clone was animated by the now dissolved studio KSS. The only interesting projects it had taken part in were Golden Boy and the old Ah My Goddess OVAs. Other than that it’s a studio nobody will miss. The director Yuyama Kunihiko on the other hand is a guy who took over lots of great lesser anime of the 80’s and the 90’s. I practically grew up with his works and I have great admiration for his skills. His roster includes Plawress Sanshiro, Windaria, Jurassic Tripper, and even Pokemon. I can’t say I was thrilled with what he did in this show though.

So, in a typical magical girl fashion, we have:
* pretty and immature teenage girls
* gaining magical powers
* having repetitive magical transformations and special attacks, pointlessly chewing up 3 minutes per episode
* fighting evil demons that want to eradicate love from the world
* doing silly teenage things in between
* experiencing love, romance and going on dates

These things happen in all straight Mahou Shojo. The pacing is way faster and there are a few surprises that are not as predictable as SM, but the story generally rides the Bandwagon of Mediocrity. The events are bearable and even likable most of the time, even if most are pointless, don’t contribute to the story in any way, and the conclusion is predictable and open to sequels. This anime never changes its theme throughout the series; it’s always about stopping demons from spreading evil. Yeah it’s a kid’s show but a bit more variety wouldn’t hurt a 50 episode series.

Unlike the group treatment of the heroines in most Mahou Shojo, here you really feel that each girl doesn’t just have a different behavior but is also is a different person with a different story to tell. Although they still fight for the same goal, both heroines and villains have side-stories in their respective positions and do develop somewhat, making them more likable. And I don’t simply mean more gadgets and upgrades, they also get steady boyfriends. Other than that, they lack much presense, no character was distinctive or weird enough to be memorable.

Visually, the show is just serviceable. Voice acting was generally good, the girls show some bare skin from time to time to keep the veteran otakus interested, there are several romantic scenes, lukewarm battles, rainbows and hearts and wedding dresses fill the screen. None of the above was presented in any way better or worse than it usually does, plus those repeating clips in battles always damage the whole.

In all, this show is like a half-baked wedding cake. Although it was perceived as a better looking SM when it first came out, after a few years it got forgotten for not having that much to remember it for. Heck, no typical magical girl show has something to remember it for when Precure makes a season each year. It is a nice way to spend your time but it is no masterpiece.

-Do you accept this woman to be your beloved wife, in good and in bad, in sickness and in health, in rich and in poor?
-Yes, no, yes, no, yes, no.

By the way, there is also a set of OVAs as a follow-up to the show. As it usually happens with side stories, they are better animated, plotless, and way heavier in fan service. The girls are funnier, sexier, and generally more colorful, but don’t develop any further or something.

Wedding Peach is a very interesting title if one takes the time to see it through. The first episodes are probably the worst of the show so if you are willing to bear with it, this is a very rewarding experience. At the start I felt the similarities with Sailor Moon were going to hurt its chances to be an original and concise series.

How wrong I was! Sure the first few episodes are very very similar to Sailor Moon but as I saw them through I could see that the plot was going somewhere a little different. Somehow detaching itself from the "Sailor Moon-ness". This is of course to Sailor Moon what Rahxephon is to Evangelion. Like Rahxephon it takes a while to get off the ground but when it does, it even outdoes the source material in certain aspects.

The aspects I felt were handled a bit better here were the relationships between the leads. As the cast is considerably smaller than Sailor Moon's, a lot more time is spent to develop the characters; and some of them really needed it. The storyline also moves at a much better pace than Sailor Moon with things getting revealed early on still relevant in the end.

This is where I will stop with the comparisons to Sailor Moon and will now assess it on its own merits.

The animation for the title is quite good for its time. Slow scenes like fast scenes have a nice frame rate. The vibrant colours give it a nice feel and look. The character design is well done for the most part except a few scenes where Momoko and Hinagiku's hair just look strange. The repeated transformation/attack footage can get quite tedious but it is worthwhile here as it prevents from repeated footage of other scenes.

Some of the backgrounds are very well drawn and suit the scenes perfectly. Most of the action sequences take place in a "natural" environment like forests, fields or woods and these are drawn very well. The "fighter angel" costumes are really cute but the "bridal outfits" are pretty hideous.

The sound is an aspect this series just excels in. The two intros and outros are wonderful and are as fun and fluffy as they need to be. The second intro is my favourite of the lot as it is very well crafted Jpop. The background tunes throughout the series are also well done. The music from sad scenes are beautiful and emotive, a bit like the music in Ayashi No Ceres. I really want to get the soundtracks for this but them being out of print does not help

The voice acting is also very well handled here as a minimum of characters have either annoying voices or performed badly. Overall the seiyuus did a very good job with their characters. Hinagiku is voiced by the same lady who went on to do the voice of Asuka in Evangelion and she is one of the standouts here.

The story takes a few episodes to get off the ground but when it does, it really pays dividents. The story is about a war between the Devil World and the Angel World that has somehow moved to the Human World. This being the main story, it is not touched on that much at the start but given a nice chunk near the end to be fully explored.

At the start of the series we get the relationship of the three "Love Angels", Momoko, Yuri and Hinagiku and their attraction to Yanagiba. Momoko, over time finds herself more and more attracted to a different boy, Yousuke. That particular storyline is very interesting and has a beautiful pace. It also gives the series a real boost as it makes you care a bit more about the characters in general be they directly or indirectly involved in it.

Another aspect of the story I really loved was the Wedding theme. It was extremely fruity but they pulled in off with great panache. The revelation of the "Saint Something Four" was also quite clever. The only aspect of the story I had trouble with was the lack of one for Scarlet. Although with what is on offer she is a very well-rounded character, a bit more background would not have gone astray.

The pace is also a little wrong on some storylines like the Yousuke/Viento one but that does not detract from the series too much.

The characters here are probably the series strength. The main cast is given a very good chance to shine throughout and there are thankfully no inconsistencies in their behaviour. Momoko and Yuri are probably the best examples as they grow a lot as Love Angels and as teenage girls. Be it through their friendship or their love lifes.

The secondary cast is also great with some "Devils" stealing the show on more than one occasion. Potamos is an exquisite antagonist but also the funnest character in the whole show. With her extreme reactions or her use of "You know?" at the end of her sentences, how can you not like her, you know? She is not just used for comic purposes either and actually develops as a charcater too which was great to see. Other cast memeber who were interesting and very well portrayed include Takuro, Igneous, Celeste, Sound, Cloud and Thunder.

This anime has provided with a lot of fun times. It cheered me up whenever I felt down with the playful silliness of it all, also the great cast was very refreshing as they were universally good. I own the series of this and I can definitely say it was worth every penny. A thinpak collection has been released so you should get that as it has even more value that way.

I enjoyed this immensely and I would recommend it to most magical girl viewers, fans of comedy could also give this a try as it is quite comical most of the time. Sailor Moon purists will probably not enjoy it if they keep bringing it back to how it's like Sailor Moon. If you can approach it with an open mind though, there are some fun times to be had.