We, Without Wings - Under the Innocent Sky 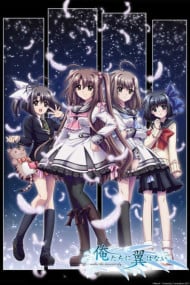 In the big city of Yanagihara, the masses of people and buildings make it a bustling place to exist, and yet, people will meet and fall in love here in this city.

As an individual who loves to be challenged by an anime, and pick up on a "things are not what they seem" theme, I stumbled across this series by complete accident and dare I say I enjoyed every nonsensical minute of it. We, Without Wings - Under the Innocent Sky isn't good for what it is, it excells at what it hides from you. It is hard to write this review without spoiling some major plot points but I shall do my best. In the City of Yanahigara, a seemingly large cast of characters live their lives affecting people that they meet and helping each other out the best they can, but are they hero's from another time and place or just normal folks living day to day? Takashi Haneda wants to leave this world, but is delayed by his duties as Class Representative, Graduation Essays, and his faux girlfriend Asuka Watarai. Shusuke Chitose is quasi-employed charmer who learns about acceptance while working part time at Alexander Restaraunt and bonding with his trainer Hiyoko Tamaizumi who happens to be a published author that Chitose must write a review about for another of his part time jobs at Men's Freeze (a fictional GQ magazine.) Drac is helping Naru Ohtori find her lost bike while dealing with various gang members and street folk along the way. Kobato Haneda is Takashi's little sister, dealing with issues with her brother and trying her best to keep him happy and grounded. Rounding out the main characters are a parade of colorful secondary characters from a very inappropriate little girl, Alice, to party hard Alexander waitresses, Tsundere Class Vice-Presidents, Over excited crushes from afar, a very lecherous restaraunt owner, a Crepe Vendor, and the various city denizens who pop in and out of our cast's lives daily. Story 7/10 Although We, Without Wings gets bogged down in it's own setting, characters and vast amount of ecchi, there is actually a very compelling story about dealing with emotional issues and self acceptance that taken in context can hit very hard. Every character has demons, and a place to run away to so that they can avoid the pitfalls of thier lives. Oddly most of the characters run away to a fictional fantasy land called Geruda but how does this connect these people who seem to not know each other? How indeed...it isn't until 8 episodes in do we finally get to the truth and if you make it that far, you are rewarded with the gotcha moment that hits your understanding (if you haven't put two and two together or spoil yourself prior). The last 4 episodes deal head on with these issues, and the realization that the series is not so much about the main character Takashi, but about the people in his life and how all these happenings affect them. Animation 8/10 The contrast between light and dark, night and day, clean schools, and dirty streets do a big job in helping tell the stories. Characters are drawn well, not copy and paste given the vast amount of humanity in the anime that exists. It tells me that the creators cared about every detail, and it works. Sound 6/10 To be honest, the OP and ED are bland, dime a dozen J-pop tunes. There was a nice Piano Jazz background soundtrack that could have been wonderous if it wasn't mixed so low in everything going on. When the anime shifts into the fantasy world, the music and sound becomes an afterthought. This could have been handles a whole lot better. Characters 9/10 Where this anime takes a lot of hits, the overwhelming amount of people on screen actually accentuate the busyness of it all. You do not meet anyone who do not drive the main group of characters on, everyone on screen serves a purpose and in essence drive the series. Without them, our protagonists would not have any reason or motivation to live their lives and handle their problems. The secondary/minor characters here are as much of the scenery and given the actual subject matter presented near the end actually make sense in the larger picture. Overall 7.5/10 Do not read further as I am now going to spoil the series in the overall:Ready?Really ready?Here goes:This anime deals with mental illness. How and why, I will let you discover on your own. Near the end, it deals realistically with someone who knows they need help and how they go about it. The first step to any kind of recovery is admitting you have a problem, and how this comes about and the who and why the people in their life wants to help is poignant and never forced. The downside to We, Without Wings is the ecchi. Although I am a fan of ecchi, fan service, boobs etc..this easily could have not been a part of it. There are a couple of scenes that border on out and out hentai, and it was a distraction rather than a welcome addition. Otherwise, it was an enjoyable experience that I recommend you check out for yourself. However, if you dislike ecchi, or slice of life you might want to steer clear. Cheers!

I won't romanticize it; I watched this for the ecchi goodness.  Burnt out after a stretch of serious/emotional anime, I needed something sugary for a change of pace.  You can't write much about this show without spoiling it, so I will just say that the ecchi kept me going for the first few episodes but I would have finished this anime without it.  An intruiging premise and a good story line are peppered with attractive, if two-dimensional, characters and tons of tongue in cheek humor.  So good, and all the more so because I wasn't expecting it. 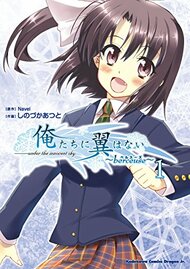 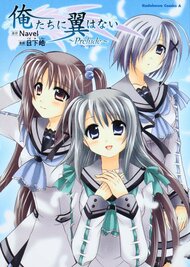 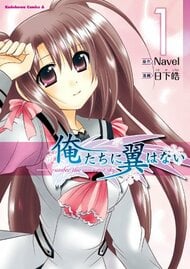 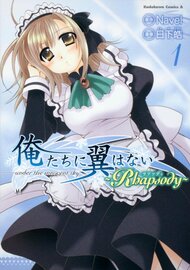 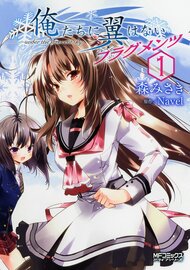 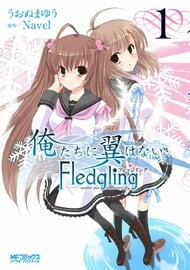