We Were There - Reviews 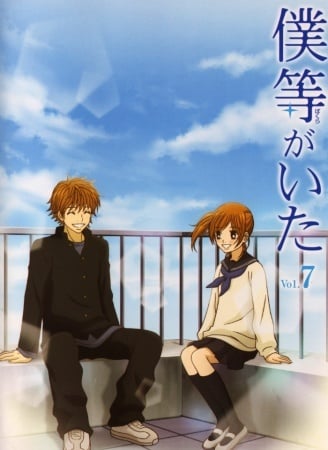 For those not already familiar with my inexplicable taste for just about any anime with a decent romance, I'll just say that it's not too terribly difficult to pique, and keep, my interest.  Thus, when I started to fight off boredom not long after Bokura ga Ita's halfway mark, I knew I might be in trouble.  The series employs a somewhat odd style of pacing, however, that, despite this problem, managed to carry me through all twenty-six episodes.  In lieu of undulating more than a sine graph on steroids, the story orchestrates a rather innocent romance between two high school kids, and does so in a practical fashion, which perhaps explains its charm.

That said, the gist of the series is told from the perspective of the female protagonist, Takahashi.  For the first half of the series she's a good choice as narrator, but her indecisiveness becomes grating as the series progresses, and she ends up being somewhat of a turnoff.  While the same drama repeats cyclically, her thoughts themselves do not change, which gives rise to an annoying repetition of her, in many cases, downright whining.  As the viewer I wanted to see her character evolve and her romance strengthen, but instead I ended up wanting her to simply shut up and stick with a decision.

Bokura ga Ita's main problem is that it simply doesn't have enough content to span the timeframe that it does.  While relationships obviously have their ups and downs, Takahashi is like an abused dog that enjoys being kicked, and each time she justifies going back to Yano simply because she likes his smile.  As such, her character development peaks very early on, and her self-loathing and denial is only bearable for a short while.  She never really matures or changes throughout the two-year span of the series, as the same childish Takahashi in episode one bears a lot of resemblance to the adult Takahashi in episode twenty-six; her naïveté is only endearing for so long.

I can't say I cared for Bokura ga Ita's animation all that much, especially considering how much it varied in quality.  Most of the time it carried a rather simplistic feel emphasized with the liberal use of pastels, generally ignoring substantial amounts of detail in favor of plain, character-focused settings.  During important scenes, however, the animation would kick itself up a notch and start incorporating much more elaborate shading effects and the like, which somewhat forced the mood and made serious moments seem slightly awkward.  Likewise, in scenes of minor importance, quality would decline, often in the form of blank backgrounds and disproportionate faces.  I've seen plenty of series with lapses in animation consistency, but it borders on obtrusive here, and I can't say that was too appealing.

Like the animation, the musical score also left a lot to be desired in terms of quality.  The same tracks were repeated over and over throughout all twenty-six episodes, and this repetitiveness seemed to coincide with the dragging out of the storyline, which certainly didn't help in keeping my already taxed interest.  Along with an only mildly impressive cast of voice actors, the series often came across as rather monotone, and I thus found my mind wandering a lot.  Were there not considerable pacing issues with Bokura ga Ita in general I don't think this would have been as much a concern, but considering the fact that the series already teeters on the edge of boredom rather often, this was not a good thing.

To be honest, I never really liked Yano from the beginning.  While a nicer, more restrained male lead would no doubt have made the drama less entertaining, he came across as far too arrogant and chauvinistic for my tastes, and made the whole romantic scenario seem forced; for a good portion of the series Yano treats Takahashi in a downright asinine fashion.  Given that Takahashi starts off the series with a general dislike for him, it was a bit hard to swallow the nature of her attraction, most especially during the middle portion of the series.  To make it worse, toward the end Yano's personality drastically shifts from one extreme to the other, and he came across as shallow.

Takahashi proved a much stronger female lead to begin with, but she, too, ends up whiny and clingy, which made her more annoying than empathetic by the end.  Despite Yano being a total prick to her for a good portion of the series, she keeps wandering back to him time and time again, and it gets old quite quick.  Yes, I got the fact that she's supposed to draw parallels to Nana, but the writers really took it overboard and I wanted to reach through my screen and slap her on a number of occasions.

My favorite character of the bunch, though, was Takeuchi, who turned out much more likable than Yano.  The fact that the opening sequence shows absolutely nothing but Yano and Takahashi, though, indicates from the first episode that they will be together, so the "love triangle" his character introduces does nothing but draw out the drama pointlessly.  The fact that he served absolutely no purpose but to drag the series out to cover twenty-six episodes instead of thirteen bugged me to no end, and his trivialization did more to harm the anime than help it.

Were Bokura ga Ita half the length with a bit more solid main characters, I think I would have enjoyed it more.  As I mentioned before, I'm a terrible sucker for romance, but when a story is drawn out so terribly long by dumbing down its characters, I can't say it suites my tastes.  However, I don't think it's as bad as I've made it sound, and settles somewhere just above my bar for mediocrity, so perhaps I've bashed it a bit too much.  It's a decent choice for a serious, relatively realistic romantic drama, so if that fits your tastes, it's at least worth looking into.

Bokura ga Ita interested me because I was bored.  I rarely watch these kinds of romance-y animes, but recently I've grown fond of them since they tend to be short (20-30 episodes), cute, and funny.  However, I feel Bokura ga Ita could have been finished out in 12-15 episodes.

The animation I thought was cute, though they use the same old bubbly, starry backgrounds repeatedly. Also, they tend to use flashbacks A LOT, and this got really old fast. I want to see new scenes, not the same old animation from 3 minutes ago.

The music... this really needed improvement.  They used the same songs and sounds every episode.  There is a chime sound they used during serious moments that got annoying really fast considering they used it so much in one episode.

Now for the characters.... this part here is why I feel the anime was ruined after 15 episodes. Takahashi started out fine, she was strong and cute.  By the end, though, I felt she was nothing more than an annoying blob of tears crying at everything.  She cried so much going into the final episodes I felt like I stopped understanding the anime because I didn't see what was so sad/upsetting.

Yano... I felt like he was never really in love with Takahashi to begin with.  He was cute and funny, and a bit arrogant.  However, by the middle of the anime all I felt from him was that he wanted a replacement for Nana and would never get over her.  I ended up hating him more and more and actually did not want him to be around Takahashi.

Probably the only characters I consistantly loved and hated were Take and Yamamoto. Take's character was pretty much the same throughout the anime, and I thought he was quite loveable.  Yamamoto, though I hated her, also was the same throughout the anime.  I think it would have been a little nice to have seen her mature a little near the end and stop being around Yano. Her relationship with him just never really made sense anyways.

Overall I feel I would have enjoyed this anime more had it had ended earlier.  I never felt like Yano and Takahashi were really a couple.  It was almost like they forced them to hang out because that's what people want.  Her relationship with Take is much more cuter.  The only reason I'd recommend anyone else watching this is if you're really bored and wanting to get your mind off things.  Even then you might just get sucked in and get bored with it, but want to finish it because you want to know what happens.

The first episodies were really promising, all the ingredients for a fairly good anime were there, but, for some unknown reason, it turned into one of the worst things i've ever seen on a screen.

The animation is terrible, the animators weren't even trying to make something decent, come on, i've seen children do better illustrations of human beings, the characters lose one of both eyes in more than half of the whole anime lenght, showing their complete lack of dedication. The characters also have little or no expression at all, they only make the old blue face, red face, angry face, boooriiing

Sound is okay, the voice actors worked pretty well and the voices are ainda unique. The music however, is boring, the same "la la la" song all the time is pretty annoying, the opening and ending themes are plain, but they surprisingly don't get boring after listening 26 times.

The characters are all stupid, nothing new to expect from a romance anime, but, the thing here is that ALL characters are stupid, and they don't even get any better through the story, all they do is stupid, it kinda makes you want to kill everyone and end the story right away. It's terribly sad to know that normal teenagers are seen like that.

The story sometimes get so boring it made me want to just drop off, specially after the 13th episode, I really don't know why is it a 26-episode instead of a 13. The story is about two high schoolers trying to overcome the difficulties of a relationship, the male protagonist, Yano, has a "depressing past", and that's where things turn into complete bullshit, we had like 7 episodes all about the " nana-san issue ", it was just so annoying, watching that became almost unbearable, the love triangle wasn't even a real thing, and the ending was just meh. Bokura Ga Ita is only worth watching if you have nothing more to do and want to spend some time.

I was stuck in a love-hate relationship, wanting them to stay together but at the same time, break apart.

The ending made be want more but when I thought about it, I didn't want any more of it.

This story was a predictable one but still very good it had some parts when I was like what the fuck how that happen? O.O and then some parts like uggrr why she do that??? but anyways it is really good and it is not really a love triangle T.T cuz I know if you hate love triangles as much as me you wouldn't even bother to watch this anime...LOL but I think it was pretty good it makes you go "ahwwwwww" <----I was laughing so many times because I was like "how can someone so something embarrassing like that" it is not much comedy either well I didn't think it was funny when they where trying to be funny >.>