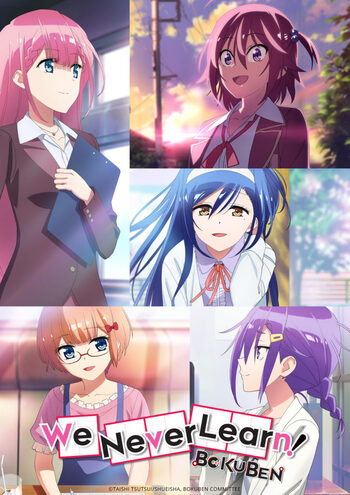 Simply put, one of the better romcoms due to its clever little buildups and the colorful cast. A lot of the skits are the cast misinterpreting words or situations but it's done in a way that it doesn't get old. The art style is still extremely clean and the show is just very consistent which is probably one of the shows' strongest elements.

Even though I'm normally not a fan of the Power Ranger syndrome (where characters are given color to make them memorable due to just having no personality), I didn't mind it too much with this cast since the characters have a fair bit of personality and don't rely on the hair colors to stand out.

Although there are moments where I felt the show was pushing into a certain direction, every character does get their moment to shine. It's not the greatest show but it's effective, consistent and clean.

I should give 0/10 for this ending, but other things were not that bad.
It's wortt watching, just anime is kinda original, so if you wanna to continue, then you should read the whole manga, not from 70th chapter
That's all what i'm gonna say.