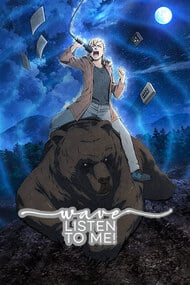 At last: an anime made for adults that doesn’t involve excess gore and violence, a workplace drama without the stuffy romance plot, and a female protagonist who doesn’t resort to cheap fanservice to charm the socks off your feet. For the gloomy millennial going through a whatever kind of crisis, Wave, Listen to Me! has got it all, and then some, by way of radio broadcasts you’ll never want to end and a main character you’ll relate with immediately. If you don’t know what you’re doing or where you’re headed, then don’t worry! Minare Koda doesn’t know any of that shit, either. And look, ma, she didn’t even need to go to another world or suddenly gain magical powers to fill that hole in her aimless little heart! The series begins with a radio program, with up to five minutes of Minare just talking into a microphone. She also fights a bear in the woods as she does this, but you won't find out until later to see how she managed to pull that off. It’s a delightful combination of the old school and the new, in other words, because while hardly anyone listens to the radio anymore these days, it turns out it's still got some tricks up its sleeves and isn’t completely dead yet. Wave, Listen to Me! is partly about radio and the wonders of broadcast media’s ancient ways, but it’s mostly about its main character, Minare. Minare, who still doesn’t know what she wants in life, just that she doesn’t like where she’s currently at. Sound familiar? That’s okay, I feel the same way, too. Of course, the only real, clear answer this show ever gives you is to follow the thing that’ll give you the most joy, but demure little Marie Kondo this is not. Like Minare, this show is simultaneously vulgar and mature, and every bit as cynical about the world as every jaded young adult alive today. But it’s also pure and relentless with its desire to get better, just like every young adult alive today who's trying their best to survive in a world that’s way, way tougher than anyone ever told them. It’s also got a pop culture reference game that’s always on-point, so if you recognize and empathize with Minare's favorite coping mechanisms, then that's not by accident. Everything about this show is the same way – it’s on-point and oozes confidence, from its lengthy love letters to radio, to the rest of the characters that make up this quirky little cast. Like the demands made of radio DJs, Wave, Listen to Me! is talented enough to make sure there’s never a dead moment on-air. And like anyone who has to make a living with just their voice, this show has just the right amount of swagger to make sure you’re listening to it and listening to it well. At the same time, it never strays too far from the things that make it real and relatable. And in the end, it’s really because of its earnestness about its subject matter that Wave, Listen to Me! is miles and away more heartfelt than any workplace or slice of life series out there. Of course, that might just be because I was the specific target audience for this show – but you didn’t hear that from me. If you give this show a chance and listen to what it has to say, then chances are you’ll hear all that – and more – straight from the horse’s mouth anyway.

A good slice of life adult comedy.  When Minare is ranting it is absolutly great.  When she interacts with Mizulo and Kanetsugu its great as well.  Minare's love life is dull, I'm actually rooting for Mizulo to be her love interest.  When they take away her free rain with her show it slow's a little. If they do a season 2 which I would watch I would like them to focus more on the radio show and those people and less on the the restaurant.

This was a very very unique anime. Firstly I should say that this is the first and only anime I know about that has to do with radio broadcasting and is completely reliant and based on radio broadcasting. This anime isn't over the top and it isn't lacking in any way. Characters aren't overly designed to be the hottest character you've ever seen like almost every other anime but this doesn't disappoint in the slightest. The characters are incredibly intriguing because of their different personalities. Every character seems to be different and they all work great. This anime felt more like a gag but with an actual story and was truly a good and calming watch for the mind. Definitely a good end to my week and might a good one to yours. 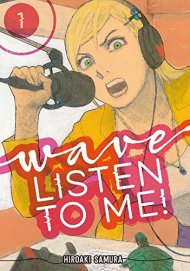