WATATEN! an Angel Flew Down to Me - Videos 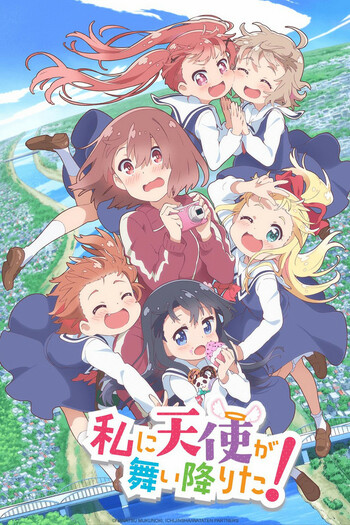 WATATEN! an Angel Flew Down to Me Episode 5 - Don't Worry! Leave It to Me!

Hinata's classmate Koyori-chan is always hoping that people will rely on her, but it never seems to work out that way. Even so, Kanon-chan is always there to gently smooth things along for her. One day in class, the two of them join Hinata's group and together they all attempt to bake cookies, but...

Can We Talk for a Moment?

Don't Worry! Leave It to Me!

Mya-nee Doesn't Have Any Friends

I Don't Understand What Mya-nee Is Saying

Please Stay Until I Fall Asleep

I Said Too Much Again

In Short, It's Your Fault, Onee-san

Anime-Planet users recommend these anime for fans of WATATEN! an Angel Flew Down to Me. All available to watch right here, right now!

Misha is an elementary school girl who lives with her father, having lost her mother at a young age. A new maid has joined their household, and on top of being an unusually muscular woman, she also has an excessive love for young girls!

Much like with the premise for WATATEN!, UzaMaid features a character -- Tsubame Kamoi -- who makes cosplay outfits, but has a more strong Lolita complex than Miyako could attest to. Much like Miyako, Tsubame is strictly interested in one young girl who she often tries to coerce into wearing her outfits. The main girl is also pretty self-aware with how creepy said woman would be, but unlike with Hana, Misha has a more strong will and vehemently refuses to wear them, even when she is tempted by food.

Both of the stories contain similar elements. My first thought when watching one was just how similar it was to Thor her. Common points include

older girl has clothing fetish and tries to get young girls to wear her clothes.

UzaMaid is about a maid and wataten is about a sister so they are both different in that regard, even though their over the top comedic Loli obsession is the same

They have the same vibe to them.

Both are about the same thing (Meets childen , gets to like her and doesn't do anything naughtry with her)

They are almost the same . the only thing that isn't the same is that in Uchi no Maid , the woman could ricochet a bullet with her abs while in Wataten the girl is shy and socially akward.

Oh yeah , while in UzaMaid the child gets to like the Woman (Somewhat like a mother) in Wataten the children helps the girl to get better and better at socializing.

Also , it's worth mentioning that the same studio made them.

And considering i am bad at writing down my thoughts , i am pretty proud of what i wrote , so please don't delete :)

Tomoko Kuroki is eager to begin her new, glamorous, and romantic high school life where she’ll surely become popular and have all the guys vying for her affections. Her plan is sure to succeed, having prepared vigorously by already dating 100 guys... who happen to be video game characters! But when months pass and she can’t seem to get...

Both Wataten and Watamote are slice of life/comedy shows whose main character accurately depicts what social anxiety can be like, leaving those who can relate thinking, "this must be written from experience".

In the land of Naral Island, a land of magic and swords, humans and monsters live together. Once upon a time, there used to be a terrifying Demon Lord, but long, long ago the first Hero defeated the Demon Lord that appeared on Naral Island. The Demon Lord would revive again and again throughout the ages, but every time a Hero would appear to defeat it...

Both of these shows have cute girls doing cute things and share the Slice of Life tag. Only Wataten has the Comedy tag but both shows have their fair share of humor and both have heartwarming moments between the characters.