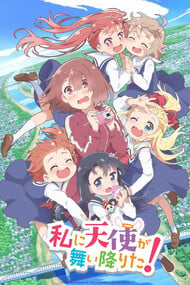 Can We Talk for a Moment?

Don't Worry! Leave It to Me!

Mya-nee Doesn't Have Any Friends

I Don't Understand What Mya-nee Is Saying

Please Stay Until I Fall Asleep

I Said Too Much Again

In Short, It's Your Fault, Onee-san

WATATEN! basically a teenaged girl that loves making cosplay outfits and letting her little sister and her friends wear them, and taking pictures of them. In my opinion its a really good anime, i absolutly love the artstyle, the story is simple, but still filled with a lot of content, every episode is mainly based around one activity. amazing OP aswell as ED, and cute and ketchy music during the episodes. And the charactars are really nice animated and expressive, and maily lolis. the 3 main charactars Hinata, Hana and Noa are very ofter watched after looked after from hinatas big sister Miyako. the entertaining episodes and the funny situations really makes WATATEN! an entertaining and funny slice of life with a bit of daily and school life. and in my opinion the little girls make the anime really adorable and cute!

Before any close-minded, typical westerner action-filled anime fans drop this after five episodes and give it a two and leave an irrelevant opinion, let me explain why this series works for me: Is this a lolicon/pedophile anime? No, absolutely not and any counterargument that bashes this series for that reason should be ignored. In fact, this series has a total of zero scenes that suggest any innuendos, which includes the first episode's infamous "yamate," scene, which has no perverted intentions on Miyako's part and is a comedic juxtaposition from Hana's side. Obviously there are scenes that will make an average viewer raise their eyebrow, but you have to realize it's not intended to be some pedo-yuri garbage, but more about how Miyako's actions are not normal and how she may not be aware. I could talk about specific scenes that are polarizing, however, I don't want to spoil anything for any new watchers. While this is a slice-of-life with no substantive plot, this entire series deals with the subject of Miyako being a shut-in and her bizarre methods of coping with social anxiety. I love the fact that throughout the whole series, Hinata and her friends are trying their hardest to coax Miyako out of her shell. This isn't me trying to provide a stretch to find of a plotline for this series. You definitely don't need a thinking cap for this series, but it's a little beyond just a typical cute, moe slice of life and provides substance when it branches off in to Miyako's social issues. This anime isn't perfect by any means, because at the end of the day it's still a slice-of-life, however, it makes up with the memorable scenes, lovable characters (Hinata, Kanon and Hana are probably my top three), the great art style, the music, and the overall enjoyment of the series. The only episode that fell short for me in terms of pacing was episode four. My favorite episodes, by far, were five, six, eight and nine. This anime is great in my opinion. Don't let the negative reviews deter you from picking this up. It's a heartwarming show, just try to look past the half-handed, negative lolicon, woke overtones that critics try to paint this show with. It's nothing extravagant, but it's a wholesome show that doesn't deserve the hate it's getting. I'll leave it at that. I enjoyed the hell out of this and I hope we get a second term. I'm very happy that we're at least getting an OVA :)

College student meets and falls in "love" with her younger sister's friend. Okay. So, this was made by the same studio that released UzaMaid a year ago, and it does show. For starters, I don't have much issue with the main plot namely because it's a show. It doesn't mean that it's suggesting that actual cases of pedophilia are funny. The show makes it clear that there is an inherent creepiness towards that concept, and it never gets to the same extent that UzaMaid did when it used Lolita as its main schtick. With that out of the way, what do I think of the show? Let's start with the characters. Miyako Hoshino is the protagonist of the series. A college student, Miyako is someone who hardly leaves her home due to her ineptitude with socializing. Really, she's almost as bad at it as Tomoko from WataMote, which was actually one of the reasons as to why I was never able to finish that show. It just really made me think about how bad I was (and still kind of am) with being sociable with other people. To describe it, Miyako has anxiety about going out, about interacting with others, has little to no social skills. However, at the same time, Miyako as a character isn't that interesting. She's not really that funny. Even when she starts to squee over Hana, she is restrained with it. She's really the polar opposite of UzaMaid's Tsubame. Even when there are some nuggets of intrigue to her such as her being skilled with making sweets or hand-crafting cosplay outfits, she is otherwise bland. Hana is the coprotagonist, the eponymous "angel" in the title. Hana is a more stoical girl who quickly picks up on Miyako's creepiness regarding herself, but she goes along with wearing Miyako's cosplay outfits in return for various sweets. Hana serves more as the straight man...well, girl, where she gives the right reactions towards not only Miyako, but Hinata, Noa, and others. The problem with her, however, is that much like Miyako, she can be bland. She's there to be the reluctant modeler. She does mention once that she was an only child, which could potentially lead towards more development into Hana's life to maybe explain why she would come off as cold and abrasive at times. Hinata, is probably the only truly fascinating character. The younger sister of Miyako, she loves her sister unconditionally whilst not knowing why exactly she does. She is a very energetic fifth grader who provides most of the laughs in the show. Heck, her first appearance sees her galloping towards Miyako's room and jumping on her bed, subsequently waking and frightening her, and then heads to school as if nothing had happened. Hinata comes off as wholly childish with how she misunderstands her sister's interest in Hana, or how she lacks Hana's more mature attributes. My only problem there is she could lean towards being annoying at times, but otherwise, she does pull her own weight. Noa has only one character trait: she is a narcissist obsessed with being "cute" sometimes to even outdo Hana in terms of cuteness. Honestly out of the main cast, Noa would be the least likable. She's haughty, self-centered, and annoying. Maybe they could have some explanation down the line that would provide insight into Noa's motivations, but I doubt that. She can also be pretty manipulative, having caught Miyako wearing one of her cosplay outfits and then blackmailing her. On the opposite side, she does show some indication that she is developing feelings for Hinata, who often provides her with emotional support, which I actually found pretty cute. There are a few other characters that I don't really have any feelings on. Mrs. Hoshino is funny, though she doesn't appear too often. Koyori and Kana are class representatives of the main trio. Koyori reminded me heavily of Satania from Gabriel DropOut (and I was actually informed that Kana was actually voiced by the actress who played her). Koyori tries to be someone that people could depend on...but she has continuous bad luck, or she needs help herself. Kanon is kind, sweet, and often more lucky than her best friend. Of the two, Koyori is honestly more entertaining. They seem to also be developing into a little something more. Humor wise, the show often misses more than it hits. It's honestly pretty mediocre. Miyako's more restrained in her actions and lacks the over-the-top prowess that Tsubame had. Other potential comedic moments are also underscored because they lack that sting to them. As for music...it's also bland and forgettable. The opening sounds pretty and is genuinely catchy, but in the likes of other slice of life openings such as Yuru Yuri or Uchi No Maid, it comes off as less memorable. The ending theme is also mediocre. As for animation, it's okay. It isn't anything too special. Overall, WATATEN!: an Angel Flew Down to Me is unfortunately more in the mediocre bin. While some of the characters are interesting, they lack depth or are reduced to one character trait. The humor isn't as biting, and it doesn't push the envelope much like UzaMaid did. It's a show that is better off as white noise. 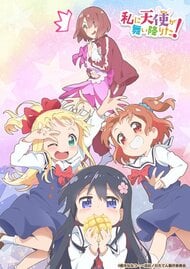 WATATEN! an Angel Flew Down to Me Special WATATEN! an Angel Flew Down to Me: Precious Friends 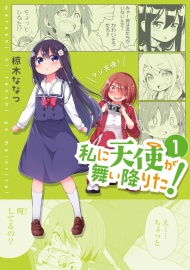