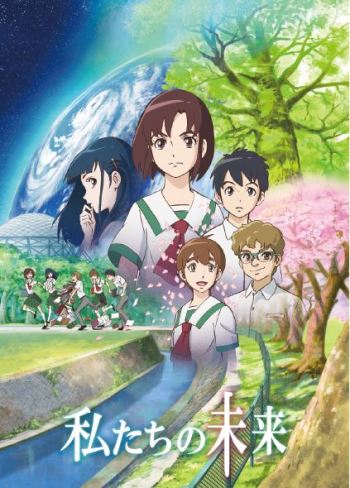 Aru Mori no wo Hanashi: Rururu no Rule

An old man who is the headmaster of a primary school bordering the ocean paints a picture of a whale, an animal he had seen so often off the coast when he was a boy and now sees all too seldom. He reminisces about his youth, when he simply considered whales a source of food, though he vividly remembers a time when a whale was speared by a whaling ship. He knew of no other way to treat whales then. But that day he sees the first whale he has done in a long time - and it is beached against the rocks. He races out of the school to come to the whale's aid...

In the near future, litter-picking has become a competitive sport as popular as soccer. Akari stands out the least in her class, but one day she meets Tokio—a charismatic SpoGomi competitor blessed with an overwhelming amount of talent and popularity. Thus starts a coming-of-age story that involves young people from around the world, united via SpoGomi and the aim to create towns, rivers and oceans free of garbage. With the anime being produced in Japanese and English simultaneously, SpoGomi: World Cup Exhibition Match Arc serves as brand new piece of entertainment to be transmitted from Japan to the whole world.

a 66-year-old cicada wakens from its slumber, eager to climb as high as it can, spread its wings, and provide offspring for future generations.

Nanatsu no Umi no Tico

Nanami Simpson lives on a boat with her marine biologist father. Together with their adopted Orca whale Tico they travel the Australian coast exploring the marine wildlife. One day life turns upside down when Cheryl Melville, a wealthy girl from England, decides that she’s bored with her lifestyle and wants to adventure with them on the boat! All too soon, Nanami, Tico, and the rest of the gang find themselves embroiled in all sorts of trouble in which they battle bad guys and protect the animals of the sea. One thing is for sure – life with Tico never gets boring!