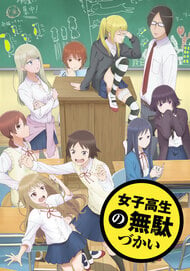 Well, this was something. The series is about three childhood friends - Nozomu Tanaka, Akane Kikuchi, and Shiori Saginomiya respectively - attending the same class at high school. One day, Tanaka decides to give her friends nicknames; for Akane, it's "Ota" becacuse of her being a nerd; for Shiori "Robo" because of her emotionless demeanor. And such, they nickname her "Baka" because she is an idiot. Okay...the show isn't bad per say, but it's also something that I'm not largely fond for. There is no big story, of course at it just revolves around the titular girls' every day high school lives so nothing overall amazing. The show also suffers from repetition. Each episode goes like this: Tanaka tells her friends that she was going to tell them something amazing much to their annoyance; the "amazing fact" is wholly nonsensical; Tanaka does something stupid often at the expense of other characters...rinse and repeat. But I would give that a pass because some of the characters are enjoyable. Scratch that: some are. The animation is average but unimpressive, befitting the series. Voice work is again decent in some areas. My only issue is that the subtitles would often then to go through to quickly for me to read, but that's more of a minor gripe. The opening is very catchy, I'll give it that.  As for characters, it's a mixed bag. Starting with Tanaka. Tanaka is an idiot who does idiotic things and whose seeming only reason to exist is to be an utter nuisance to the other characters. And that is what she is. Tanaka is probably the worst character I have ever had the misfortune of being introduced to. Her voice is annoying; she acts like a total douchebag for no other reason than for amusement; and she never changes for the better. While annoying characters can be funny, here, there is nothing endearing about Tanaka. She is that bad of a character. I don't even begin to fathom why Ota and Robo have anything to do with her. Worse, I feel that one of the reasons as to why this show often varies is because it's being weighed down by Tanaka's presence. There are such things as lovable idiots, but this is not one of them.  Ota is slightly better. She is a level-headed otaku who tries to also be a manga author, and she also is deeply into BL. But that's mostly it. Robo funnily enough is probably one of my favorites of the show thus far but I can't really say why. Maybe it's her stoicness; or that she is some kind of mad scientist who's head is perpetually in the clouds. Or how she tends to be the deadpan snarker of the trio. Whatever the case, she is the best out of them both. As the series continued onward, you get introduced to more characters like Saku "Loli" Monoi who is unfortunately nicknamed that because she looks like a primary school student. Worse, she acts the part as the innocent child unintentionally such as still believing in Santa Claus or that babies were born when the parents to be write to the country's court to grant them one. She also lives with her grandmother of her own volition. It's...really touching. Hits really close to home for me. Or there's Minami "Yamai" Yamamoto, the resident chunnbiyou with delusions of grandeur and royally sucks at her academics. She is also pretty hilarious with how she uses this level of escapism to explain her poor performances in her grades and classwork. Kanade Ninomae is the boyish girl who finds herself unwittingly popular with the ladies and possesses a deep admiration for Robo. Lily Someya is the foreign exchange student and token lesbian of the setting who breaks out in allergic welts whenever she's around men, but somehow, Tanaka has the same effect on her. But my other favorite character of the series has to be Masataka Sawatari, the teacher of the trio of misfits. His funniest moment is when he introduces himself to his students and then bluntly explains that he was into college girls and then goes on a tirade about Japan's legal system. But I swear that I give this guy the upmost of respect. I mean, having to deal with bad students like Tanaka or Minami or all of the shenanigans that happen on a daily basis, and somehow not break down mentally...that takes some balls of steel.  So, with that being said, my final thoughts on the show? The show is not perfect as it has many problems that I feel keep it from being largely enjoyable such as with Tanaka herself, or how the comedy doesn't always hit. The show runs on a formula where you know that if you have X then Y must come afterwards. It can sometimes feel like an obnoxious watch, which is why I can't really recommend it. But the show did remind me of a few school animes like Lucky Star, Azumanga Daioh, among others, so if you like those slice of life shows, then by all means, give this a try.

This kind of anime are really good. It's fun and refreshing anime that you can enjoy watching. The opening song are excellent, I like it alot. And I love the characters, it somehow fitted some good serious scenes (like the friendship of the 3 protagonist how they stop having in touch with each other, the love relationship of Momoi and her grandma, Ota and the professor moments at the convention), it gives breath to the characters own doing too outside school life. The trio developed of Kanade, Momoi and Lily are great too. It's at ease to see how Baka was so extraverted and loud, I never get tired of it. And since they're highschoolers who wasn't even focused on studies, it makes them more relatable of course specially with these genres (ex. how Ota stays on her bed wholeday while Baka was bombing their group chats). It's really great, I enjoyed it. 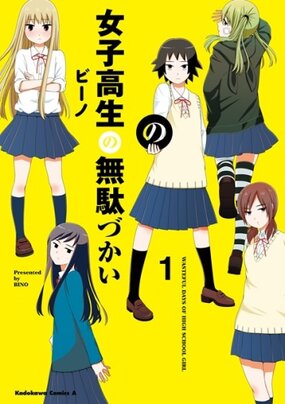