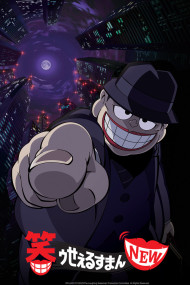 My name is Fukuzou Moguro, and people call me the Laughing Salesman. I am no ordinary salesman. The merchandise I sell is the human soul itself. Hooo-ho-ho-ho... All people in this world, young and old, male and female, are lonely. I am here to fill the emptiness in all of their souls. No, I won't accept a single coin in return. As long as my customer is satisfied, that's all the payment I need. Now, I wonder what sort of customer I'll serve today... Hooo-ho-ho-ho-ho...

Warau salesman new was something i was pretty excited for. I've always been a fan of abstract animes and shows that dealt with human short comings. I've also enjoyed bad guys whp get their just desserts and are exposed for who they really are on the inside like on Neuro and the ace attourney seires. I hadn't heard of the orginial warau salesman, but reading the premise was what got me tp sign on and watch for the past 12 weeks.  story Warau salesman episodes go like this. Person has probelm. Moguro (the reoccuring main character) will present them with a option on how to fix it.) the person takes this fx and their problem is fixed. Moguro will warn them not to get too comfotable with their new gift. But the person will not listen and this always results in their own downfall. The first few stories were pretty alright. Infact they were pretty cool. They slowly dragged out the individual's true intentions from their innocent facade. One of my favorites was actaully the first segement from the first episode. I wanna say that it stayed with a pretty consistent sense of quality, until about 2/3 in the series. After this, the stories get a bit blander. And it just becomes a bit too cruel in some instances. Some people ill get punished when they honsetly didn't do anything wrong. It all felt a bit lack luster and rushed toward the end, which was a shame as i beleieved it had a pretty strong start. Animation The animation was alright. Nothing to write home about. It was pretty consistent, given some episodes had more movement and animation than the others. Though the Opening visuals are pretty cool. And some of the in anime scenes are artistically abstract, over all it was alright. I did enjoy the old anime character designs that seemed to be from around the 60's or the 70's or the 80s. It reminds me of osomatsu san or doraemon or other animes with that similar style. Sound the sound work is well done! The actors are really good especially moguro. The music did well to fit the mood, depending on what was happening. Its a very nice sound track I think. The opening song is jazzy and groovy and a really chill beat to listen to. The ending simply follows suit. All in all, no real complaints on the sound work. Maybe a small one though... They only have like 3 or 4 songs. This isn't a huge problem of course, it's just a tiny personal nitpick. Character Moguro as acharacter is one of the most complicated in the series. He never seems to care if your more of a good person or more of a bad person. If he sets you in your sights and you actually take the time to listen to him, it will only end badly. He's a living embodiment of too much of a good thing and will over indulge the victim in their most deepsest fantasies.  I enjoy when he does this to the people who genuinely deserve it. But then theres people who get hurt just by association. Theres people who didn't do anything to deserve the punishment  dished out to them. I have no problem with villains like moguro who simply go with the flow and do as they wish, regardless of the victims intentions. But seeing as what the show seemed to try and teach the viewer, he should've had a clearer sense of justice. Maybe not even that. I just wish i saw more punishment of the truly bad people and not people who were slightly troubled. All the other characters simply played into their roles and aren't that noteworthy. overal the anime was ok. I am a little dissapointed, but it's still better than some i've seen. But there's alot of improvement that couldv'e been made. A lot more stories that couldv'e been told.

I thought that I already understood many of the intricacies of Japanese social norms, and this series took me by surprise. It isn't easy to understand why things develop the way they do once Moguro offers something to the episode protagonist. Imagine one of those episodes when Nobita comes crying to Doraemon for help, and he offers a gadget but also a warning, and Nobita just plainly forgets about it or ignores said warning, sometimes out of greediness, sometimes wanting revenge towards one of the bullies. Doraemon has a soft spot for Nobita, he believes in Nobita's good nature as a child, and when Nobita gets what he deserves, there's a chance he will learn from the experience. There's a moral to the story, and you will see Doraemon at the end of the episode being angry at Nobita for not listening to him/being a brat, of feeling pitiful for him, sometimes even laughing at him for being Nobita.Well, Moguro knows what the person in each episode is like, he knows how to lure them to take advantage of what he offers them, I mean, it's a trap from the start, and he gives a warning that will end in an "I told you" situation. Everyone in this series is going to get punished, it doesn't matter if the person deserves it or not, and feels like the moral is not to trust anyone that is offering to help in any way (and this is mostly a Japanese mindset, that nobody helps without wanting anything in exchange).You see, Japanese people are way too rational in general and have a hard time reading the intentions of other people. There are way too many victims of fraudsters, cults, conmen, and swindlers in Japan, because the majority of people learn there is a certain way one should behave in society.There is more to that general 'teaching', of course, each main character shows a different aspect of human nature: how they are greedy and are not happy with what they have already, the way many of them have a weak character, the lack of ambition, sometimes excessive complacency. Even characters you think maybe don't deserve the punishment, there ¡s something that makes them lack virtue.In the end, the series is about what the problem with each main character attitude is, and what it may lead to if you keep going that way.For the 'NEW' part, I think it is a good way to make Warau Salesman known to younger people, but aside from offering extra episodes, it doesn't add anything special to the manga or old anime.

This one was interesting, it's basically an anime about the human race and their vices and what happens when they give in to them.(My opinion of course.) The salesman Moguro is of course the catalyst for the end game of those vices, though extreme in some cases, he does give them a warning of course, then he becomes a real...well.... you know. Overall it's a good one to watch, good characters and good animation. Enjoy. =-) 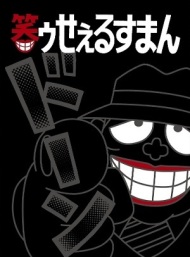 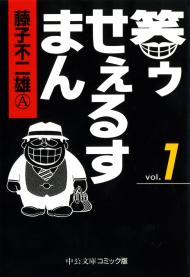