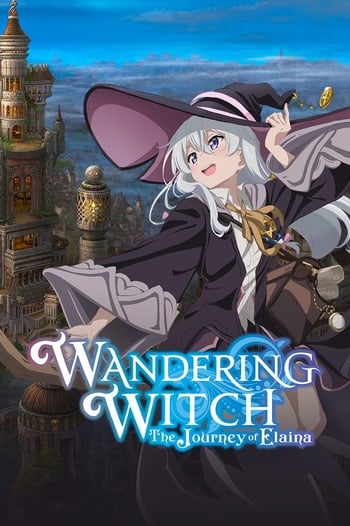 If you're looking for anime similar to Wandering Witch: The Journey of Elaina, you might like these titles.

Kino and her talking motorrad Hermes travel the land together, visiting different countries and learning about the various customs and cultures of the people they encounter. From technological marvels to nations with unique laws and political intrigue, each location yields a wealth of insight of its people. The beautiful world they inhabit is a vast one, and a number of other travelers share tales of their adventures as well - an exiled prince wandering the land with his talking dog; an orphaned child raised by artificial intelligence; and a former slave girl with a talking motorrad of her own, photographing the world around her as she travels through it. Although the world is not always beautiful, its rich diversity lends it a fascinating loveliness that is worth the journey to see.

They're both about a traveler who goes to differnt places, interactions with different people, and sees different cultures. While Wandering Witch is more light-hearted and fluffy and Kino's Journey is a more serious brand of fluff, they're both in the same branch and have similar themes.

Both are episodic shows about exploring the world and its different perspectives and ideologies. Some tales are tragic while others are hopeful. Wandering Witch centers more on how magic affects the world whereas Kino's Journey centers monre on how technology affect the world.

Both anime's are about a young witch who leaves there home and goes out on a Adventure, on this Adventure the Witch meets new friends and find's out more about the world.

protagonists are travelers, visiting cities and meet strangers, but don’t intervene or solve the problems they encounter.

Violet Evergarden comes to a private women's academy to tutor Isabella in the ways of being a lady. Heir to the York family, Isabella feels trapped in this new and uncomfortable world. She still grieves for the only person to ever bring her happiness – now lost to her. Violet's lessons do give her a brief respite from the melancholy but with the absence of joy, how long does it take to truly heal?

A young girl by the name of Kino has lived through a traumatic experience in her past, and now lives with an old woman named Shishou. With the help of Shishou, Kino hones her skills with a gun and learns to ride the talking motorrad Hermes; however, Kino is haunted by what happened to the person with her namesake, and is also suffering from an identity crisis. Even with these issues Kino must prepare for her first journey; will it prove to be pleasant or harrowing?

Tiara at Flora Girls Academy is where witches are trained to purify the magical beasts that threaten the humans. Together with her classmates, Tiara is ready to learn how to save lives and bring smiles to people’s faces.