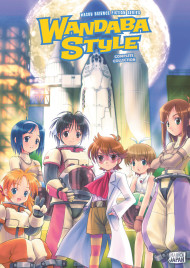 Former nursery song singer Sakura, former Japanese song singer Himawari, former folk singer Ayame and former rock singer Yuri collectively make up the group Mix Juice -- a group that proves even washed out idols can have a second chance! With no gigs in sight, their go-getter manager finally finds them a new job: test subjects for a mad scientist?! 13 year old Tsukumo Susumu is determined to land on the moon, and it's up to the musical babes to pilot each new "creation" on its maiden voyage. Will the girls survive long enough to perform the first ever concert in space?

Why, oh why, was I drawn to Wandaba Style?  Partly, it was the radical animation style.  The series in technique resembled Words Bubble up like Soda Pop, except the bizarre coloration went from light pastel to jagged brilliant for Wandaba Style.  Second, some people thought I would relate to this anime.  It was produced in 2002-2003 (English dub, 2005), almost giving one the feeling that it was a tribute piece for the passing century.  Wandaba Style had  the ‘screwball comedy’ style of  the late 40's – early 50's.  Its music style sounded much like the ‘Beach Party’ movies of late 50's- early 60's.  The comedic tone had the Monkee-esque humor verve of the later 70's.  As the main characters bopped about, you might notice the inklings of 60's discotheque transitioning into the disco of the 70's.  In total, Wandaba Style displayed the mindlessness of the 90's. Hey, could this mean that I relate to all this because I'm an ol ...  nah! But to relate is one thing.  To absolutely like the series  ... ain't happening. Synopsis:  Four girls from different musical disciplines  genres (balladeer Ayame, traditional folk songstress Himawari, children’s song chanteuse Sakura, and rocker Yuri) are formed into the idol group Mix Juice by their mis-manager Michael Hanagata.  With gigs not coming in, the girls hook-up with child-prodigy / scientific genius boy Dr. Susumu Tsukumo to become his space pilots/lab rats in his efforts to be the first to the Moon.  Tsukumo is quite delusional, not accepting the previous lunar visits but is confident that humankind are 'spores' seeking to spread across the cosmos.  And he’s planning to get there in versions of spacecraft that refuse to employ normal rocketry technology of fuels to attain escape velocity.  One method reminds one of the 'Mentos Fountain' experiment I conducted in class years ago.  Impressive results, but get to the Moon on such as this?  Absurd. It is this absurdity which propels Wandaba Style through ten episodes which finally bring the girls to the Moon for a lunar concert.  Another source of the gag is the typical disunity among the girls who argue over their group's vision like wildcats.  But the biggest yuk-getter is that strange inability for clothes to stay on people.  The girls are expected to perform in the nude if requested.  This gets old fast as full dorsal nudity is the limit.  And don't ask that cute android Kiku 8 to cover up; the skin of this space satellite (don't call her a robot ... it irritates her ... and don't try to make sense of her ... just go with it for the twelve episodes) is covered with solar power cells for that androidal power-up.  Not as big a gag is the hybris of Hanagata who just bungles his way through the episodes in as nauseating a manner one might imagine. The plot degenerates into a race to the Moon between Dr. Tsukumo and his 'cold-as-ice' mother, whose Mafioso style intimidates Hanagata into making the biggest blunder in the girls' career.  And, honestly, the series could have ended at episode ten, but the less than welcome introduction of a space alien and one more crazed space odyssey for Dr. Tsukumo and the girls only prolongs the story unnecessarily. Coming before CGI, the garish coloration and character design are Wandaba Style's claims to infamy.  The musical variety of Mix Juice was limited to two songs, quickly overplayed, and easily forgotten.  The retro feeling that you would hope to have impact might work for The Addam's Family which can make surprising comebacks was completely lacking in Wandaba Style. Not the worse anime I watched (Naria Girls still is the bottom of the abyss), but I would rue the day to find something with so little substance.