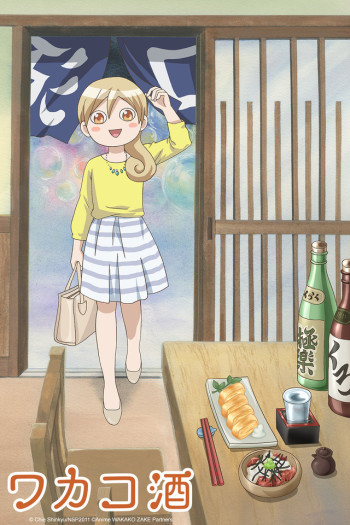 This review is done after watching the first 6 episodes. It's about sake/beer and food, clear and simple. At about 2 minutes per episode, this is not the series that you go to for plot or character development. You do get some snippets of the main character's daily life, mainly related to her workplace. Working ladies would especially be able to relate. For foodies, you'll appreciate how the dishes are animated, they look quite mouth watering. Don't get thrown off by how the main character is animated, I think they intentionally made her look comical. I'm a foodie, so I love these short episodes that get straight to the point. Fu-pshuuuuu....

It reminds me of the korean drama "Lets eat". I think the opening credits can be apart of the episode so that it doesn't take away from the two minutes. Its ok. It has the slow pace that I enjoy in anime.

To be honest, this show doesn't really have a plot per say.  It's simply about the main character, Wakako, eating and drinking, talking about food pairings, and so forth.  We do see some snippets of Wakako's work-life.  If this was a full length episode series then it would probably be boring, but since the episodes are only 2 minutes long (or 1 and 1/2 minutes if you don't count the opening) then this type of set-up works.  It helps that the episodes are well paced.

Some people may get turned off by the way Wakako's drawn, but I think it adds to her charm and helps her stand out.  Also, I love the way food looks in this series.  It's so beautiful and delicious looking that just looking at the food in this series makes me hungry.

While the opening song isn't anything special, it is pleasent, somewhat catchy, and fits the tone of the series.  The same can be said about the background music.

This series isn't anything amazing, but it is enjoyable for what it is.  If you are looking for a "bite-sized snack" to fullfill your anime craving, then you may want to check out this series.