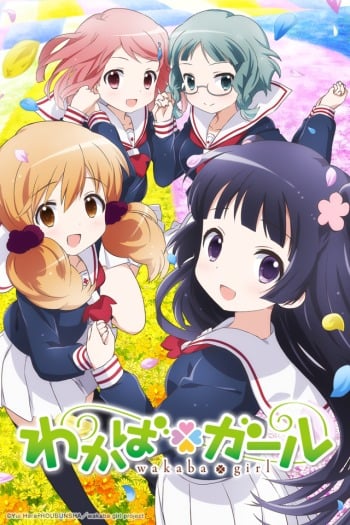 Both anime are about girls that start off lonely with no friends, and eventually begin building relationships over a course of time. the reasons differ, one was super shy and awkward and the other was raised rich and had a sheltered existence.

Even with that, the fluffy feeling both shows give is very similar.

Diferences to note.Wakaba Girl is short and a slice of life/ school lofe style of anime

Creator connection. Both slice of life comedies surrounding a assemble of girls in high school. While one focusses more on blonde girls obsession both have similar atmosphere. Both series could be labelled adorable and the comedic timing in both series is quite the same.

While Wakaba girl focusses more on the disparity of living styles and behaviour between a (not too bright) rich girl, a fujiyoshi girl, a ''gall'' girl and a relatively normal girl, Kiniro focusses on making two petite "English" blonde girls adorable and having quite a bit of obvious girl-love subtext (especially between the tsundere and tomboy of the group ) . Kiniro Mosiac is a full lenght series whose episodes are mostly split in two stories while Wakaba girl is a short of less than 10 minutes in lenghth.

If you are looking for a series that has the same kind of feel between these two than you don't need to look further. However as noted they have different casts and might not have the same charm as the other series because of this. For two short blonde girls and their japanese doll friend plus a tomboy and a tsundere we get a tall not too bright rich girl and a fujiyoshi, gall girl and a token cute ''underdeveloped'' character. Just by noting the characters one can see a great gap that not everyone would be willing to cross nor everyone could enjoy, most likely.

Both are light comedys about a group of high school girls befriending and slowly getting to know each other.

Mayu learned everything she knows about manners from her mother – most importantly, that in any conversation, she should make eye contact at all times and let the other person finish their thoughts completely before responding. Unfortunately for Mayu, this advice is difficult to follow when your friends are a bunch of talkative high school girls, and has left everyone thinking she's overly quiet and shy instead! With good friends such as chatty Miki and shy Hana beside her, Mayu will silently navigate her high school life and have plenty of fun in the process!

Third season of Recorder and Randsell.

Recorder and Randsell Re

Atsushi and Atsumi are back for more misunderstandings and eventful school days! Atsushi can’t help but continue to get arrested for hanging out with young Hina, Sayo finally learns the truth about Atsumi’s brother’s age and struggles with her feelings for him, the siblings and their parents visit a hot springs resort, and everybody has a good time at a family relay race. Even with their differing sizes, the two always manage to have fun from day to day.

Despite having made several friends at school, Mayu Morita continues to be as silent and serious as ever, although sometimes her quiet nature pays off – especially when it comes to keeping failed love confessions a secret. But even though most girls her age chatter away, Mayu still manages to enjoy quality time with her friends, whether they’re baking cakes, enjoying a sleepover, visiting the library, or simply stapling print-outs for the teacher.

As siblings go, Atsumi and Atsushi are anything but typical. High schooler Atsumi is exceptionally small for her age, and elementary schooler Atsushi is abnormally tall with a deep voice, leading to misunderstandings on both sides! Whether Moriyama-sensei gets embarassed by Atsushi's every move, or Atsumi is offered candy meant for children, or poor Atsushi is arrested for being a perv that’s trying to snatch kids on their way to class, this brother and sister duo is bound to have an eventful day-to-day life!