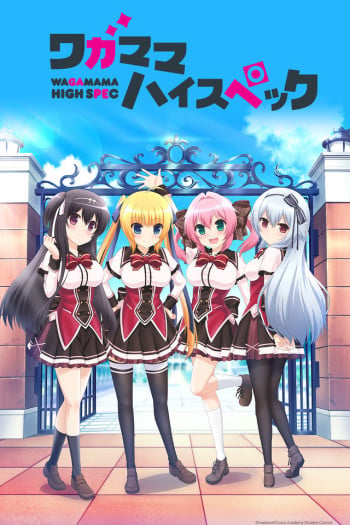 Both of these anime are short-sketch anime about mangaka-girls who do just about everything but make manga. Both are set up as high school groups that get into all sorts of whacky adventures. The absurd levels in both are fairly similar.

Both of these anime are mixtures of comedy, ecchi, and school life. Both feature groups of girls that are part of a school organization, but who spend most of their time getting into random situations.

Jun'ichi and his friends have been invited to vacation on a private island during the summer. But while everyone expects pure-hearted fun in the sun, Mitsuki has other plans! Now the Geno Killer is in for a ride as Mitsuki's sunblock aphrodisiac gets all the girls ready for action. Jun'ichi must struggle to keep his pants on, lest the desires of the women around him become too much to bear!

YU-NO: A Girl Who Chants Love at the Bound of This World Special

Deep in the mountains, isolated from civilization, there is a boys-only school that will finally be receiving its first class of girls in an attempt to transform the school into a co-ed one. Most of the boys have never been in contact with girls of their own age, leading to an explosion of hormonal craziness. From the sickeningly perverted fetishist guys, to a rather odd girl that seems to be chasing the most normal guy in the school for reasons known only to her, there's twisted humor to be had.