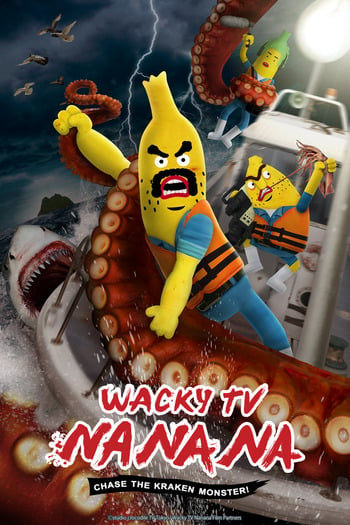 If you're looking for anime similar to Wacky TV Na Na Na: Chase the Kraken Monster!, you might like these titles.

Demetrios was a young man in Ancient Greece who was a potter's apprentice, but also a rather timid otaku. Despite pursuing the arts, he was blessed with natural athletic talent. One day, he gets dragged into a village conflict. Demetrios contemplates how helpless he is, but then is struck by lightning! When he comes to, he is no longer in Greece, but a strange land where he can't understand the language and people look rather different. Yes, he somehow ended up 1964 Tokyo! Of course, Demetrios has no idea what Japan even is. What will become of him?!

Both anime are hilarious comedies without the traditional anime drawing style. They both have short episodes and non-human characters. If you're looking for something short and funny to enjoy on a quick break, kick back and relax with these.

The anime center on vegetables that children hate, everyone hesitates to eat, and are smelly. The series follows these vegetables as they visit a bar to share drinks together while they talk about their worries.

Tomato Man and the Knights of the Salad Table

When the wicked Bug-bug gang casts an evil sleep-spell on the beautiful Princess Peach, King Boo-Melon sends for "The Withered Plum," an old hermit believed to have magical powers, to awaken the princess from her deep, eternal sleep.To help protect the king "The Withered Plum" uses his magical powers to create a group of mighty warriors from ordinary fruits and vegetables, the Knights of the Salad Table. Tomato Man, our hero, was the last of the knights to be created by "The Withered Plum."

Elite Sushi Ninja fights with evil Monsters for justice every day! They, however, are on the popular superhero TV show…. In the real world, three lazy kids named “IKURA”, “MAGURO”, and “TAMAGO” watch with that TV show. They wish to be Heroes like the Sushi Ninja on the TV show some day, but they always fall out over something stupid. One day, they unexpectedly meet up with a beautiful Princess being chasing by Nachos King Gang. She deems the three guys to be the Heroic Sushi Ninja on TV show and asks them for help. They are so excited and act like the heroes on TV show. Then they decide to face with the enemies to protect the Princess…. Can they be the real Heroes and protect the Princess from the evil?

"The Harvest Show" is a concert where all of the different grains show off their beauty to everyone watching, and "HarveStars" is the name given to the grains who put on the best performances. In this modern age of rice acreage reduction policies and Westernization of eating habits, bread has become the most popular grain in Japan, and dinner tables are dominated by "Yeast King," the bread HarveStars. But five new rice students have enrolled at Kokuritsu Inaho Academy, a school on the verge of shutting down, and they form a new group called "Love Rice" that's practicing to beat Yeast King at the Harvest Show and win back the popularity rice once had... This heartfelt "kome"-dy featuring anthropomorphized grains is full of laughter and passion! Two grains aren't needed at the dinner table... so which will become the true HarveStar?

A home drama centering around protagonist "Nameko." Amusing family anecdotes, surprising and funny events, and a little bit of tear-jerking in the warm, everyday lives of the Nameko family.