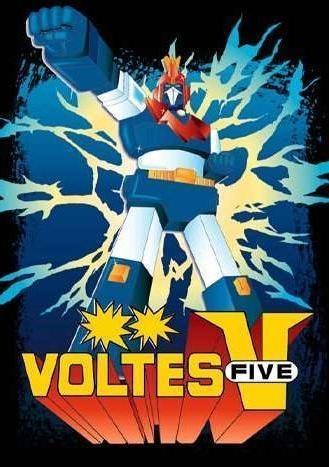 Voltes V is the brainchild of NOT Go Nagai (finally). It was made by a dude named Yatsude Saburo, who made numerous mecha shows over the years. The thing is, all of his work was nothing but a rehash of other people’s ideas and for all I see he never added anything new to the lot like the god of manga or the time traveller did. In fact, all his works seem almost identical to one another. So why the hell am I even reviewing this work? Simply said, Voltes V is historically the first mecha show with the full course of the formula. One would say that this is as far as classic super robots managed to go without turning to space operas or real robots. So without being anything groundbraking, Voltes V finally perfected the still tested mecha formula to its highest known form.

1) The 5 member team. A good-hearted charismatic man, a silent and rather rude rival man (his dark side in a way), a beauty (love interest for the previous two and first attempts of fan-service for viewers), a boy and a fat guy (used for comic relief). The original idea can be credited to Gatchaman, which Saburo had the kindness to abuse in all his works.

2) Robot made of 5 ships. This may appear to be a genuine idea at first, as no other mecha show before had this many. Even Getter Robo had 3! So what, was that original? Not entirely; another anime called Combattler V aired last year with the exact amount and stereotypical team. So who was the guy that made it? … Saburo again; it was his first work actually. But I refuse to review that series because it didn’t have the following element.

3) The villains have their good side and show emotions and compassion. Seriously, all villains before this one were ugly monsters without mercy or even much of a backdrop story. Here prince Heinel from the villain side becomes sympathetic as the show goes on and his past is reveiled. Again, this is not an entirely original idea as Battleship Yamato had already done that with emperor Dessler and in a less degree even Grendizer’s Duke Freed story seems to be used identically in the backdrop of the Go brothers. Of course the first example refers to a space opera and the second to a hero and not a villain so in both cases the relation is loose. But heck, it was there and it worked.

Beyond that, the story is quite the familiar one in terms of execution, with its robot moster of the week formula, and robot special attacks. There are a few surprises from time to time (secondary characters die, hero’s strange lineage revealed) but in general, most episodes are stand-alones. There is a conclusion but it’s nothing super. It still does a fine job at promoting several moral messages about trust and friendship and willpower and does pose strong stance against tyranny and oppression. It was also amongst the first to depict several typical elements of today’s mecha series, like human emotions, equality, selfless sacrifice, teamwork, patriotism, and the eternal rivalry between the two main male heroes. Previous mecha shows also had that but the volume of the emotions and the world in which they were shown was far smaller and passable.

Although the 5-member-superhero-team cliché was not its own, after the success of Voltes V, everyone rushed to imitate its basic premise. Thousands of mecha series were made after it in an attempt to cash in some fame. And the funniest thing is that none of them managed to reach its fame and glory because the only thing they did was a photocopied formula without means to stand as nothing else other than a poor imitation of this anime. Also, a great irony with all following mecha shows is that the series which finally managed to reach Voltes V in fame was none other than Golion (renamed Voltron in the west). Comparing the two shows you can mistake them for twins. So who was the dude who managed to do such a good job to tie this show? … That’s right, it was Saburo XD

Anyways, this mecha show is famous for doing all those stuff for the first time and for many, many years all others were just imitating it with little to no success. Thus it is amongst the worthy ones.