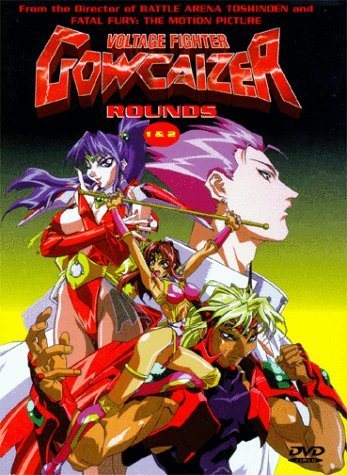 This hails from the crop of coin-op to screen cash, but where as most of them at least tried to cash in on memorable or popular franchises this movie didn't bother to do either. Now to give perspective Gowcaizer the game was at best an average fighterthe fighters were forgettable, the moves were cookie cutter and outside one gimmick it was easilya solid C-list SNK fighter I mean seriothis had no sequels and no cameos in other games.

The movie is thusly as you might expect. I think the arcade game was able to tell a more cohesive story. Now while I know all films in this genre suffer from the 'cram as many characters on screen as possible' flaw this one is particularly bad because not only does it rushto cram in as many characters as posible the sad thing is theese are asured to be characters no one knows or cares about.

The animation is also sopmewhat subpar, and gives the feel that it was just plain rushed Likewise the sound, even the art style.I'm all for jiggly boobs but even scantily clad women did nothing  to liven this up.

All in all this film could have been much better if the makers actually tried to flesh out a story and at least 1 character.

Buy? Only if you collect bad anime, Rent? Not worth it. Pirate? Not worth it?. This is the sort of film you watch if it's on cable and there's nothing but infomercials and even then, there's always sleep.