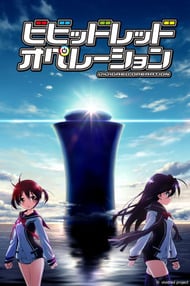 Vividred Operation, although not a masterpiece from any standpoint, has more merit to it than many people assume. I've seen it hailed as a Strike Witches, or even Puella Magi Madoka Magica clone before, and that's about as far as I've seen anyone go to describe it. I personally would prefer to watch Vividred Operation to Madoka, and in many ways I think it exceeds Strike Witches as well. Vividred Operation beats out Strike Witches in nearly every way, which is not diffiult to do, and it doesn't have the pretentious hope vs. despair narrative or the shock value deaths of Puella Magi Madoka Magica. Vividred Operation gives a nice blend of moe pandering and interesting plot devices. The story in Vividred is nothing new. Akane Isshiki is the granddaughter of a famed scientist who invented a generator which powers the entire planet. Otherdimensional beings come to destroy the generator, Akane does a flashy magical girl transformation into a marching band uniform and kills them with her friends. However, it introduces a cool concept that I wish it had delved into a bit more. Akane can "fuse" with her teammates (a la Steven Universe) to create a more powerful form. The process is nearly identical to that of Steven Universe - the girls fuse by kissing each other's foreheads, they turn into a more powerful combination of the two of them called Vivid [whatever color the second girl represents] and their weapons combine. I was really into this at first, but when it got closer to the end, the subject of two girls "docking" without one of them being the protagonist Akane came up. Akane was in the hospital, and one of her teammates asked if she could perform the fusion with a different teammate. Dr. Isshiki simply told her "no, it doesn't work like that" and that was the end of it. They never explained it any further and we never heard about it again. Other than that, the only time this anime's writing ever bothered me was the beach episode in which Akane's grandfather essentially spent the entire time trying to kill his granddaughter and all of her friends for the sake of strengthening their friendship. I feel like maybe one of the writers had a five-year-old around writing a little story and they accidentally grabbed it instead of the actual script and made it into this episode. I felt that the animation was very attractive. It's cute, and the overall aesthetic is fitting. It bears a strong resemblance to Strike Witches, if it'd had a vastly higher budget. The only negative thing I can say about it is that the characters have this sort of greasy, plasticy looking hair highlights similiar to the way hair looks in Love Live! School Idol Project. This didn't deter me at all but if you're an animation snob it might bother you. The characters, as in most magical girl anime, were all standard stereotypes. Energetic protagonist Akane, gentle heiress Aoi, headstrong swordswoman Wakaba and hikikomori Himawari. I did like that Wakaba and Himawari sort of pushed the limits of those types a little. Wakaba had a bit more femininity to her than the archetype usually allows for, and Himawari had actually withdrawn from society to the point that she refused to leave home to go to school rather than being the more common mildly awkward shy otaku who doesn't have many friends. I also felt that Rei was a nice contrast to the remainder of the cast. Usually in these moe series, even the character who is supposed to have a tragic backstory doesn't end up dwelling on it much and just behaves like any other moe character. Rei's past is actually her sole reason for actually existing in her situation and is the driving force behind her character. Overall, I would reccomend Vividred Operation to anybody, so long as they don't mind fanservice. While I can't remember any literal panty-shots, the girls' school uniforms feature skintight hot pants for some reason, which can be a source of discomfort for those not used to ecchi. It's an enjoyable watch and doesn't take too much brainpower to comprehend.

The actual plot of the anime is quite unrealistic since it involves loli fighting evil aliens trying to destroy futuristic technology that the world runs on. Although the technologies aren't too impossible, most of them would be impractical in the real world. This anime is much more well-know for the fanservice than it is for its story.The art and animation is the main attraction here. Everything from the character designs to the world layout are done quite well. Some of the villains look a bit generic, but they at least die in interesting ways. The school uniforms ditch the traditional skirt and instead go with boy shorts in order to display the characters' beautiful asses. The lolis are all very adorable even when they're intended to be antagonists.The voices all fit the characters with the intentional exception of the grandfather who looks like a stuffed animal, although this was in order to keep the "magical girl familiar/recruiter who looks like a stuffed animal" trope while also keeping the show sci-fi only without other magic. The aliens sounded generic, although not out of place, and the music was nice to listen to.The characters personalities all fit fairly standard archetypes for the most part, but they were still fun to watch. Their feelings towards each other were surprisingly realistic considering their own mental ages. One of the girls has odd dietary habits and has tried to encourage the others to try it out.Despite the mediocrity of the components of the show, this was extremely enjoyable to watch. The cute characters, the illogical lore, and unique transformation scenes all help to create an atmosphere that is fun to partake in even if it wouldn't be your first choice to recommend when someone asks for "good anime". It all depends on your taste, but if you're okay with nonsensical battles and constant fanservice then you'll probably like this show.With all things considered the show itself may not be of any literary merit, but it's still unlikely to feel like wasted time. It's also great if you're a bit tired and can't take the effort to pay attention to an in-depth story but would rather just watch cute girls fight monsters. Don't expect to come out of this with a new favourite anime, but you also shouldn't pass it off just because it isn't well written. It's definitely worth a shot, but don't be afraid to drop it since the quality is pretty consistent throughout the show.

Vividred Operation is directed by Kazuhiro Takamura (who also directed Strike Witches). Even though both anime were created by two different individuals, they're so much alike, you might of thought Vividred Operation was a third season of Strike Witches set in the future. Seriously, a set of preteen schoolgirls wearing hot pants are called upon to save the human race from a menacing group of aliens. Oddly enough, even the aliens in both series look a lot alike. The only real difference is that in Vividred Operation, we get to see a little bit of drama and betrayal involved in the series but still, that's the only real difference. The story goes like this: there are a couple of schoolgirls who receive energy from a machine that powers most of the Earth and aliens called the Alone want to destroy that machine. There is also a girl who helps the Alone in a bid for them to recover "her world" and she also ends up making friends with the girls who are trying to destroy the Alone. There isn't really anything too special about this series and even if Strike Witches didn't exist, this series has barely anything interesting about it. Every episode, there's a battle and some female bonding time between the main cast. You could easily just skip through an episode and miss nothing of interest so just go and look for something else to watch, I recommend Strike Witches. 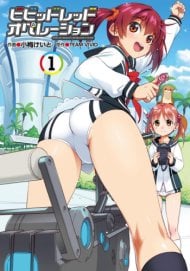